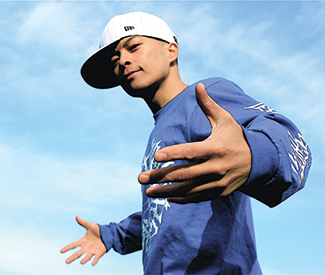 MUSIC “I always wanted to know how music sounded in outer space. And with certain types of crystals you can supposedly tune into different frequencies, receive other transmissions. Often I meditate with crystals, go to sleep, and dream about music from outer space. Then I wake up, make stuff like that on the turntables, and take it from there.”

That’s a lot of there to take it from, but DJ Qbert is no stranger to mixing the cosmic with the underground. A legendary emissary of scratch who became the international representative of turntable culture in the 1990s along with his “band” Invisibl Skratch Piklz, Q has always mixed a heavy dose of Bay Area flavor into his masterly sets — which aren’t typical DJ sets by any means, but untethered, jazz-like flights during which a set of turntables and a crossfader, manipulated lightning-fast, become their own kind of spaceship. His polyrhythmic scratch concertos summon white noise, radio interference, oceanic undertow, Looney Tunes quick cuts, vintage advertising jingles, embryonic hip-hop, Big Brother menace, and fiendish, childlike glee. Great beauty, too, especially when you think of them as pure sonic expression, floating free of time and space. Not that you can’t dance your ass off to most of it, mind you.

We were talking about his new album Extraterrestria, dropping in March on the Thud Rumble label and backed by a huge Kickstarter campaign that aims not just to fund the disc, a marketing campaign and a tour, but also typical Qbert innovations like amazing touch-sensitive digital album packaging that simulates DJ controller equipment. (More details at www.djqbert.com)

“The album is actually two albums in one, two different discs,” Qbert, looking tight in a buttondown shirt and track pants, told me. “Extraterrestria is music from another galaxy, hip-hop beats from other planets, collected by the Galactic Scratch Federation. It’s as bizarre and unique as I could make it, a collection of weird noises and different time signatures with as much scratching as possible. The second disc is called Galaxxxian, which is hip-hop from earth beamed into space: raw, primitive. It features a bunch of MCs — Kool Keith, Del Tha Funky Homosapien, Mr. Lif, Soul Khan, Bambu — doing their thing, which a lot of time, you know, means going for the sex, drugs, and hip-hop and roll. We’re not quite on the extraterrestrial level, yet.”

Other biggies like Dan the Automator, Chad Hugo of the Neptunes, cellist-trombonist Dana Leong, and rapper El-P (here a producer) also contributed. “What with the recession and everything, a lot of us have been trading with each other, so we can continue collaborating. Like I’ll do a beat for your album if you do a verse on mine. Something where the money’s phased out, a barter thing. It’s put us back in touch with what’s real,” Qbert said.

As we talked on the second floor of the California Academy of Sciences, the first floor was rapidly filling up for the Academy’s weekly Nightlife party, this week a launch celebration and fundraiser for Extraterrestria — and a reunion of sorts for turntablism heads, albeit one bursting with fresh young faces. As b-boys and fly girls made their way through exotic landscapes, whale skeletons, stuffed giraffes, a butterfly-flooded rainforest dome, and aquarium displays including live stingrays, giant octopi, frisky penguins, Claude the albino alligator, and phosphorescent jellyfish, I couldn’t help but be reminded of the deliciously loopy, phantasmagorical animated movie version of Qbert’s era-defining previous album Wave Twisters, released 16 years ago.

That’s a long time between official releases, but it wasn’t like Qbert had been kidnapped by aliens. Although his live performance schedule was less-than-usual bonkers, he still made regular appearances, by himself or as part of his extended Bay Area scratch crew family. He popularized turntable techniques in a series of instructional videos and launched online educational community Qbert Skratch University, in 2009. He also went all in on the equipment tip, putting out his own brand of turntable cartridges and needles, an Invisibl Skratch Piklz-branded mixer, “and of course our own vinyl to scratch with — which is really vinyl on one side and a digital interface on the other, for use with DJ software like Traktor.”

Fifteen years has also seen the rise of social media and a more user-friendly Internet. Has that changed the way he produces beats or performs at all? “Of course it’s been great for finding new sounds to use,” Qbert said. “If I want to hear, say, a tarantula farting, I can look it up instantly and hear that. On the other hand, most of my old sets are up there now, with all their mistakes, and a lot of times I’m cringing and say in a small voice, ‘Please, please let them delete that.’ It keeps me on my toes now, knowing everything can be recorded in all its glory. But because I’ve actually been working on this album for seven years, all that’s been incorporated — it’s not like a shock. I use what I can use.

“But I try not to be trapped in the present. I often think back to the past, to cats like Sun Ra, Miles Davis, Louis Armstrong. That timeless, improvisational jazz feeling where you practice and practice, but when the time comes you’re just an instrument connecting with the god-force, channeling the sound through you, swinging through that ocean of feeling. When you’re in that zone, that’s the most wonderful thing. It’s a meditation, a spiritual thing. We’re all spirits, so we have to connect to other spirits and the most high, whatever you want to call it — God, Allah — connect to that creator source and use it because it’s yours to use. Like how some writers just flow and do that automatic writing, they’re just instruments. We’re just instruments you know, it all flows through us.”

When Qbert, raised in SF’s Excelsior neighborhood, astonished the DJ world by winning its spun-out version of the Olympics, the DMC World Championships, not once (solo, 1991) but three more times in a row after that (as part of Rocksteady DJs with Mixmaster Mike and Apollo) it was an unparalleled triumph not just for local scratch and hip-hop community, but for Bay Area Filipino American culture as well.

Qbert’s domination of the DJ world could be read as the apex of that scene, which faded in the 1990s with the rise of digital technology. And of course Qbert went on to create his own crew of fellow Filipino DJs: The Invisibl Skratch Piklz, with Shortkut, Apollo, Mix Master Mike, and several others. The Piklz went on to become insanely popular, establishing scratching and other turntable manipulations as a form of art and a highly marketable genre — turntablism — that changed the sound of hip-hop and dance music. Mix Master Mike went on to become, in essence, the fourth Beastie Boy; one early ISP member was A-Trak, current turntable-wielding heartthrob of the superstar EDM crowd.

In fact, the current popularity of turntable-rooted DJs like A-Trak and the burgeoning trip-hop and late ’90s revival makes the timing of Qbert’s return auspicious. “A-Trak runs a dance music scene and I think it’s great that he brings the scratching into it, he’s really unique in that field — so more power to him for turning on a different crowd to the sound. But for me it’s never really gone away, pure scratching. There’s a zillion underground cats who are genius at what they do — Quest, Deeandroid and Ceslkii, Disk, tons more. And maybe the widespread recognition isn’t there, maybe it isn’t in your face like it once was, but they’re all around. It’s like the guys who still do yo-yo tricks. They don’t know things have moved on. They keep practicing and practicing and doing incredible things, regardless of how many people are following. They’re always battling, always progressing. Never put down your yo-yo, man,” he laughs.

As for connecting to a new generation, working with (gasp!) turntables and (double gasp!) vinyl at this stage of DJ history is a deliberate artistic choice. Even with a resurgence of interest in analog techniques — a specific reaction to digital overload — does Qbert fear that scratching will be seen as merely a retro novelty?

“I think no one can deny that, whether you’re old or young, using a turntable to make a scratch sound — well, you can’t deny that it sounds really bugged out. How else are you going to make that sound unless you’re actually moving the sound with your own hand? Just to hold the sound and grab it, move it back and forth — that’s unique and fascinating to people. It’s like a sci-fi movie in real life, a sound that people have heard since maybe they were little kids, but one that also points to a future where man meets machine. It’s a real manipulation, a sound design in itself. What other instrument can do that?”