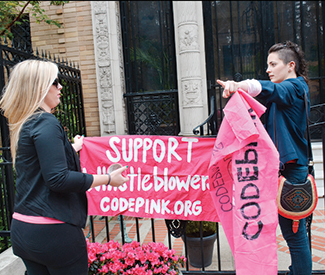 For years now, Bay Area organizers with the antiwar group Code Pink have been staging protests outside the Pacific Heights residence of Sen. Dianne Feinstein, who chairs the Senate Intelligence Committee.

Code Pink director Medea Benjamin has led delegations to Pakistan and Yemen in the past to protest US drone strikes, and San Francisco activists have frequently appeared outside the senator’s home to sound off against the US military’s use of drones.

But more recently, Code Pink activists have paid visits to Feinstein to let her know what they think of her comments condemning the actions of whistleblower Edward Snowden.

So on June 15, 2013, “We flew a couple toy helicopters outside her home” as part of an anti-surveillance protest. It was an “Austin Powers” themed protest, she added, “playing spy-type music.”

But a couple months ago, Feinstein mentioned during a hearing about drones that she’d actually seen a drone peeking outside her window at her San Francisco home. She said it crashed shortly after she detected it.

But that left activists and others wondering about Feinstein’s account, since Mancias says the remote controlled device they sent up to fly around Feinstein’s mansion was not a drone, but rather a pink helicopter, “like a toy you pick up at Toys-R-Us.”

The Code Pink activists captured video of the event, she added, and sent it to the television program 60 Minutes. “Hopefully, they’ll air it when they interview Dianne Feinstein.”

Another wrinkle in Feinstein’s story is that “she said she was home when this demonstration was happening,” Mancias said. “But we were knocking on the door, ringing the doorbell.”

Believe it or not, Feinstein has actually responded to this sort of activity in the past by coming to the door and engaging with the concerned, pink-clad citizens.

“She’s a very old school politician,” Mancias said by way of explanation. “She’s very approachable. On that day she didn’t come outside, and if she was home, we would have loved to have a discussion with her about Edward Snowden.”

So was Feinstein’s account of spotting a surveillance drone rooted in nothing more than noticing a pink kid’s toy zip past her window during a routine Code Pink protest?

Nobody knows for sure but nevertheless, Code Pink activists feel vindicated. “I can say that we actually achieved our goal,” Mancias said. That’s because more recently, Feinstein has softened her stance somewhat and admitted that “we need to look into” the domestic surveillance program.

But that perception of a small victory doesn’t mean they aren’t going back. On Tuesday, Feb. 11, Code Pink plans to return to Feinstein’s Pac Heights mansion for yet another protest, this time to coincide with a national day of action being planned in opposition to NSA spying.

Called “The Day We Fight Back,” the Feb. 11 action day will consist of website owners installing banners to encourage their visitors to challenge online spying, and employees of tech companies calling on their organizations to do the same.