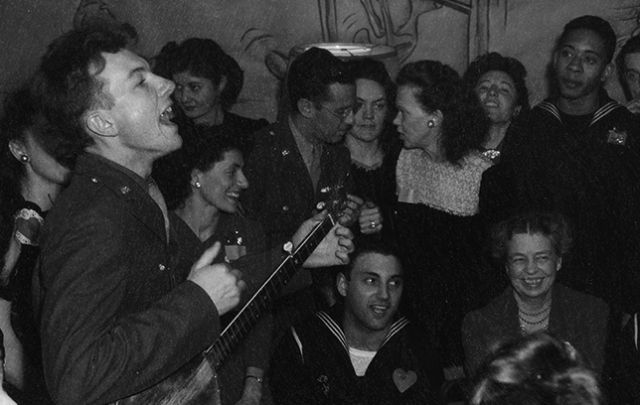 Pete Seeger’s sweet voice was, among other things, a clear, articulate, consistently outspoken one for workers’ rights. In honor of Seeger’s legacy of activism, we reached out to longtime community activist and LaborFest co-founder Steve Zeltzer to hear about what he meant to the labor movement in the Bay Area and beyond.

Pete Seeger played a critical cultural role for labor and all working people. As a labor troubadour, he traveled the entire country and many places around the world singing out for labor. That is why he came to ILWU [International Longshore and Warehouse Union] Local 10 in the Bay Area in 1941. The U.S. government had tried four times to deport Harry Bridges, the Australian-born leader of the ILWU, in an effort to destroy the union. Together, Seeger and Woody Guthrie sang out to the union’s rank and file strike committee a song called a “Ballad To Harry Bridges.”

The government was unsuccessful in their efforts to deport Harry Bridges, but unfortunately most of the left unions like the UE and Marine Cooks and Stewards were eventually destroyed by the hysterical witchhunts launched by the government — some with the active support of not only bosses but some union officials. Regardless, affiliations and actions like Seeger’s 1941 appearance in San Francisco were the reason Seeger was brought before the House UnAmerican Activities Committee in 1955, and eventually sentenced to two years in prison. From the HUAC transcript:

MR. TAVENNER: The Committee has information obtained in part from the Daily Worker indicating that, over a period of time, especially since December of 1945, you took part in numerous entertainment features. I have before me a photostatic copy of the June 20, 1947, issue of the Daily Worker. In a column entitled “What’s On” appears this advertisement: “Tonight – Bronx, hear Peter Seeger and his guitar, at Allerton Section housewarming.” May I ask you whether or not the Allerton Section was a section of the Communist Party?

MR. SEEGER: Sir, I refuse to answer that question, whether it was a quote from the New York Times or the Vegetarian Journal.

Seeger was accused of singing for functions of the Communist party, and for McCarthy and company, this was a deadly crime.

Seeger also fought for integration, and against the segregated workplace, in conjunction with the left-wing unions — like the Marine Cooks and Stewards and even the Painter’s Local 4 in San Francisco, led by Dow Wilson — that were fighting segregation. Ships in the port of San Francisco were prevented by the members of the Marine Cooks and Stewards from sailing until their crews were integrated. This concrete direct action of workers on the waterfront was a very real threat to big business, which wanted to weaken and destroy labor power and continue segregation as a tool of the bosses.

ILWU longshore leader Harry Bridges also won the support of the Black community by promising them that if they supported the strike, they would get union jobs on the waterfront, and he kept his word. Today ILWU 10 still has a large percentage of African Americans due to what happened in 1934. (Unfortunately, even today in San Francisco, many bosses in the major hotels refuse to hire young Black workers, carrying on the racist discrimination that was practiced more openly in San Francisco in the 1930s, 1940s, and 1950s.) Racism, as Seeger knew, played a virulent role in U.S. history, and his songs were a powerful cultural counterpoint to the reigning ideology and racism of the time.

This is why he was prevented from going on national television during the blacklist period after the Communist witchhunts. The corporate-controlled media in the United States had an axe to grind, and keeping Seeger, Paul Robeson, and other singers and intellectuals like Noam Chomsky off the airwaves is something that continues today. It is not surprising that this in many network TV depictions of Seeger’s life, they conspicuously fail to point out that these same networks banned his voice from the airwaves for many decades. Of course the power of Pete Seeger, his songs, music, and personal magnetism could not be banned, and they broke through despite the government and corporate efforts.

Working people of San Francisco, the Bay Area and the world have lost a great ally and union brother, but his words will ring out for eons.

This coming year’s LaborFest will commemorate the 80th anniversary of the San Francisco General Strike, bringing this history and culture back for the working people today who face similar attacks on their rights to a union, decent health and safety conditions, and a future for themselves and their families.