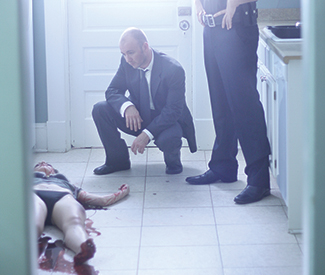 24 Exposures is the busy artist’s 15th flick to play the Roxie in a year (the list includes Buddies, 2012’s acclaimed All the Light in the Sky, 2007 breakout Hannah Takes the Stairs, and the only public screening to date of short Privacy Settings). In some ways, 24 Exposures marks another departure, being an “erotic thriller” (scare quotes needed, because it’s highly aware of its genre) — though it also incorporates Swanberg’s affection for relationships that aren’t working out, no matter how much the principals talk about their problems. His interest in horror (see: his participation in 2012 anthology film V/H/S and 2011 cult hit You’re Next, etc.) flavors 24 Exposures‘ plot: Parallel lives collide when photographer Billy (Adam Wingard), who snaps cute, topless women posed in gruesome death scenes, meets depressed cop Michael (Simon Barrett), who happens to be investigating the actual murder of a cute, topless woman.

Yep, this film stars director Wingard and writer Barrett of You’re Next and V/H/S fame. That slurping sound you hear is the mumblecore snake eating its tail, and not for the first time. (Is there anyone in that scene who hasn’t appeared in or worked on a peer’s film? The answer is no.) In 24 Exposures, it’s less of an in-joke than expected, since Billy and Michael don’t achieve BFF mode until the film’s coda. The relationships that form the core of the film are between Billy and the various women in his life, including girlfriend Alex (Caroline White), who is totes cool with his artistic pursuits as long as she’s included in the process, and any three-ways that occur after the shoots. Inevitably, there’s tension when she returns from a weekend away and realizes Billy’s been “taking smutty pictures when I’m not here.”

Billy is a sleaze, but otherwise he’s basically a harmless dude in a cardigan. If 24 Exposures had been made in early 1980s Europe, the film would pump out more bloody bodies for Michael to find; there’d be way more POV creeping and probably a chase involving an unseen killer wearing black leather gloves. Despite a sleek credit sequence illustrated with pulpy artwork, this is no lo-fi giallo. A better reference point is one from the script itself: Silk Stalkings, that 1990s epitome of basic-cable sexy thrillerdom. That it’s brought up jokingly (as in, “Do you feel like a character in Silk Stalkings right now?”) only enforces 24 Exposures‘ aspirations toward meta-ness.

The self-consciousness doesn’t end there. The film’s synthy score, which swells knowingly during suspenseful moments, is another obviously obvious choice. But if you’re expecting 24 Exposures to descend into full-on camp, you’ll come away disappointed. Lurid is perhaps a better descriptor, since 24 Exposures is bulging with “boobies” — a word Billy uses moments after explaining to a skeptical model that he practices “dress-up mixed with fine art.” Earlier, he’s described his work as “personal fetish photos,” clarifying that they’re “classy.” (Truly, they’re not.) We never see the results displayed anywhere, yet this is apparently his profession, not a private hobby, since the photo shoots involve makeup artists and assistants.

Clearly, 24 Exposures is poking fun at the erotic-thriller genre, and itself by extension. Any haters who cry “misogyny!” — because Swanberg’s camera ogles just as much as Billy’s does — are answered in a scene that’s been planned with them in mind. Photographing death is “way more interesting than taking a picture of a fuckin’ tree in your front yard,” Billy tells Michael, who counters by asking, “Why is it always dead women? Why not a dead old guy?” It’s not about that, Billy insists. “It’s ridiculous for me to try and explain this, because it’s not something that I even think about. You can’t say, ‘Why am I doing this?’ You just have to say, ‘OK, I’m attracted to this, and that’s what I’m gonna do.'”

That’s vague, and — again — Billy is a sleaze, but Swanberg’s careful to make his underlying point visually. When Michael asks Billy, “Have you ever seen a real dead body?”, it foreshadows the film’s second cute-girl murder. A distinction is made when a character we’ve come to sympathize with is brutally killed, and hers is the only crime scene that doesn’t invite us to leer at the victim.

The film’s last act cuts some months ahead; we see aspiring memoirist Michael receiving feedback from a book agent (played by Swanberg), who advises him to rewrite his manuscript. There are too many loose ends, he says, and not enough strong connections between the cop and the photographer. Oh, and the ending needs work, too. 24 Exposures, you’re talking to yourself — and you know it, and we know it, and you know we know you know.

Up next for the prolific, probably sleep-deprived Swanberg, who’s likely also got a dozen or so new movies in the pipeline: helming an episode of the San Francisco-set HBO series Looking. Wonder if there’ll be a scene set at the Roxie? *

Joe Swanberg It’s been amazing. [Happy Christmas] is a pretty small, personal movie, so it’s nice that people seem to be liking it.

SFBG When will it be coming out theatrically?

JS We’re probably gonna follow the Drinking Buddies (2013) release pattern of doing VOD and theatrical sometime around July, and then having it come out on DVD around Thanksgiving.

SFBG You’ve had 15 movies screen at the Roxie Theater in the past year, which is a pretty astonishing number.

JS They did a retrospective, which was incredible. Not only was it a great chance to hang out in San Francisco for a week, but it was amazing for me to look back at a lot of movies that I hadn’t seen in a long time. It’s also crazy to think that there’s that much stuff. I sort of forget that I’ve made that many movies.

SFBG Do you not consider yourself prolific?

JS Because I don’t write, I can very quickly jump from one project right into the next. The first six years I was making movies, I was making around one a year, because I had a day job and that was all the time I could spend on it. As soon as I was able to support myself as a filmmaker, I really was making a lot of them [laughs] — there was one year where I made six, which was really too many by anyone’s standards. It made the following year really strange, trying to actually get all of those out into the world. And also, while they’ve all had some form of distribution, there’s really only four or five of my movies that people have heard of. There’s all of these others that only the hardcore cinephiles have checked out.

SFBG When you say you don’t write, do you mean because your films are improvised?

JS Yeah, exactly. I do write, but it’s just an outlining process. I’m working so collaboratively with the actors that it’s not the sort of difficult screenplay process that a lot of filmmakers go through.

SFBG With this long filmography, is it weird for you to be suddenly known as “the director of Drinking Buddies”?

JS It’s totally fine. I tend to like the newest film the best, just because it’s the closest to where my head is at. Drinking Buddies would be the one that I would recommend to people, and talk about as well. And probably Happy Christmas will very quickly become the next center of conversations. I haven’t watched a lot of those early ones in a long time, so I don’t even know if I would like them anymore [laughs]. Hopefully, they’re all leading toward something. Getting better. Let me put it this way: It’s great that people are talking about Drinking Buddies and not some movie I made six years ago.

SFBG You mentioned that Happy Christmas is a personal movie, and obviously Drinking Buddies ties into your much-documented love of beer. So what inspired 24 Exposures?

JS I had been acting in genre movies a lot, especially with Adam Wingard and Simon Barrett. I was really interested in what motivated them to make those kinds of movies instead of romantic comedies or something [laughs]. Also, I think a lot of what 24 Exposures is about is the responsibility and ownership of that stuff. I wanted to investigate where the women fit in. Are they passive models who are being exploited, or are they willing participants? Are they co-authors of the art? Is it a little bit of all of those things? It’s something that I’ve made other movies about, too. I’m genuinely interested in the collaborative process. Who ends up taking the credit, and who ends up feeling taken advantage of?

SFBG The film is very meta.

JS Definitely. I was reading Richard Brody’s book on Jean-Luc Godard at the time, so meta was very much on my mind. I was interested in the way that Godard played around with genre movies, but very atypical genre movies. They were always much more like Godard movies than they were genre movies. It was fun to sort of dabble in that space. The other thing that was exciting to me was how my generation’s sexuality was informed by late-night Cinemax and very cheesy, soft-focus, heavy-music kind of stuff. (I’m 32.) When all of us were in junior high, that was the most erotic thing we had access to. That aesthetic is such a joke now. It’s so dated. So I wanted to investigate that as well.

SFBG Do you worry that someone will come across the film and not pick up on that subtext?

JS This is an interesting one for that question. Pretty much all of my movies have existed very squarely in the art-house audience, so I haven’t really thought much beyond that sort of space. But that’s changing these days, especially with Drinking Buddies, and, I’m assuming, with Happy Christmas too. So maybe 24 Exposures will be seen by considerably more people than some of those earlier ones. But I feel like the movie’s sort of subverting the genre at every turn. It never fully gains momentum as a pure exploitation thriller. Every five minutes it reminds you that you’re watching a movie, and puts in some sort of criticism or other unsexy thought into your head.

SFBG Totally changing gears, but I noticed you directed an episode of HBO’s Looking, which all anyone here can talk about right now.

JS Yeah! It was one of the most fun things I’ve done as a filmmaker. I really like the show, too, so I’m just happy to have had some little piece of involvement. I live in Chicago, so I have hometown pride, but San Francisco is without a doubt the most beautiful city in America. I spent three weeks trying to find a bad view, and I couldn’t. *