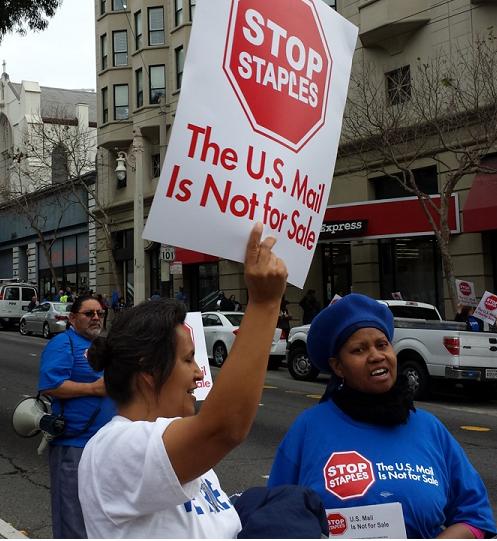 Bearing blue T-shirts and banners stating “Stop Staples! The U.S. mail is not for sale!” 70-plus protesters from the United States Postal Service Union, along with members of the American Federation of Teachers and the National Union of Healthcare Workers, today [Tues/28] rallied outside the Staples store on Van Ness Avenue in opposition to USPS’s “Retail Partner Expansion Program” that began in November.

This program allows the creation of  postal counter centers in 80 Staples stores nationwide, which provide limited USPS services at the same rates as the post office. But the drawback — and a major point of contention among protesters — is that they are staffed by Staples employees, not unionized USPS workers.

The pilot program is seen as stripping jobs from postal workers and starting down a road to the privatization of the post office. This comes in a time when jobs at the USPS have been cut by 44 percent, according to Postmaster General Patrick Donahoe. This on top of the Bureau of Labor Statistics’ projection of a 26.8 percent drop between 2012 and 2022.  The protesters and affiliates, know these numbers all too well, and consider the matter all the more  imperative to allow Staples’ USPS service windows to be staffed by real postal workers.

Supporter Lynda Beigel was employed by the USPS for 33 years before retiring in 2002, and noted how the Staples counter centers could drastically affect workers locally. “Staples doesn’t pay as much as the post office, and the post office’s employees aren’t getting enough to live on in San Francisco,” she told us.

Beigel also described fear of being in competition with a private company that doesn’t have to follow the rules and regulations that burden the post office when “there is a Staples store in San Bruno right across the street from the post office,” she said, noted that she “was horrified to find there was no security for the mail, it was just sitting around.”

City College of San Francisco Professor Rodger Schott and his colleagues in the AFT stood with the USPSU members against potential privatization , stating “we support them very much because they’re, in a way, facing the same privatization threat that we are.”

Commenting on the issue of the service’s being staffed by private, non-union workers, he said, “If the postal service wanted to have its employees at Staples, we don’t have any problem with that. However we feel very strongly [opposed to] Staples taking postal [workers’ jobs] and giving people a much lower rate without any kind of bargaining process…The threat to the postal worker is very, very serious. It’s certainly a threat against minorities and the poor people of the country. The postal service has good jobs, and it’s something that we, the nation, need. We see them as comrades in a similar struggle and we will do everything we can.”

The Stapes employees themselves, looking out at the crowd from an almost empty store, were sworn to silence, and would only reveal the number to a corporate public relations office, where we left a message and we’re still awaiting a response.

Like the post office, Staples is also struggling financially, closing 40 stores in 2013. Whether or not the union can get a foothold, and possibly add much needed reforms to the program and fight the risk of possible privatization, is gathering momentum as the public becomes more aware of its danger.