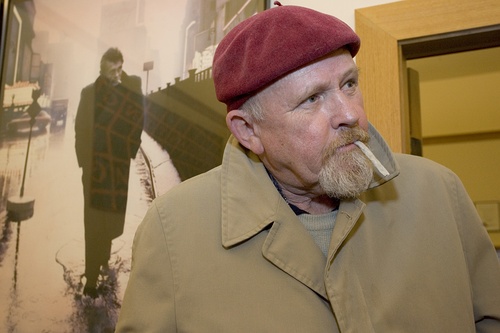 In an SF Weekly piece published yesterday, it was announced that progressive political blogger and gadabout H. Brown – an “irascible” man who has attained a specific sort of fame in equal measure for his political connections, his egregious sexism, and his unfortunate alcoholism — was leaving San Francisco. Where’s he going? The article didn’t see fit to mention. It’s whatever. One can assume Brown’s destination is that netherworld set aside for those whose behavior was enabled by the old school boy’s club blinders of the San Francisco progressive movement, still worn at the dawn of the 21st century.

“Last Call For Know-It-Alls: Classic Specimen of Old-San Francisco Bon Vivantery,” the article was called. It was written by a man; if a woman had written it, the title might have been closer to: “I Just Bought an Evil Eye Necklace, Don’t Look at Me You Cursed Troll.”

Do I sound angry? In 2008 at a DCCC, Brown inquired at top volume and in front of an ex-President of the Board of Supervisors if I was the politician’s escort. When said political leader bailed on the situation, Brown interrogated me on camera about my knowledge of local politics. I wrote about it, most names omitted, for the Guardian. In the article’s wake, I received thankful and supportive emails from men and women across the San Francisco political scene. On his part, Brown sent out multiple emails about me to his prodigious correspondence rolls, one in which he shared an communique from his niece calling me an “ignorant cunt,” another in which he addressed an un-cc’ed me about the election night in question: “You tried to make up for your ignorance by wearing revealing clothing. I was mocking you. And rightly so.”

Nearly every woman in San Francisco politics has one of these stories. When a male politician was accused of any wrong against a woman, Brown could be depended on to dig through the Internet to find evidence that the victim had been asking for it. Those unwilling to suffer him had to opt out of the hobnobbing happy hours and salons in the homes of city leaders, at which Brown was a constant presence.

Ah, old San Francisco bon vivantery. But I’ve said it before and I’ll say it again, you don’t have to care about Brown. You do have to care that this man was your Supervisor’s drinking buddy, that he took Speedo-clad swims in the Bay with progressive leaders. You do have to wonder about what that did to the strength of our political movement. And you might want to wonder about the dynamics behind ubiquitous bigots who are tolerated by people who should know better.

“If comedy is indeed tragedy plus time, however, Brown will leave ’em laughing for posterity,” wrote Weekly reporter Joe Eskenazi. “Friend after friend recalled anecdotes of offensive, bourbon-fueled behavior invariably culminating with Brown being instructed to “Get the fuck out, H.!” But, always, these were happy memories, if not happy occasions.”

None of these friends — “former supervisors, consultants, academics, political Svengalis, and other city luminaries” – in Eskenazi’s article were women. (The writer, whose work on city issues I do appreciate, told me he did interview women, but apparently none of them said anything printworthy.)

Let’s remedy that now with a few female voices. Not coincidentally, most of these bourbon-fueled memories took place in ex-Supervisor Chris Daly’s since-closed Market Street progressive gathering spot, the Buck Tavern. None are happy.

“This was the first time I was introduced to H. At a benefit at the Buck Tavern I walked in and there were all these progressive journalists sitting around a table with him. He said ‘you’re the one with the great ass!’ He started asking me if I had family members he could date. I was standing there horrified, I just didn’t know what to say. I’m a mouthy lady, and even I couldn’t think of anything to come back with – not just to him, but to every other progressive journalist who was sitting there listening to him who laughed! I said hi to a few people, and then I left the event.”
– Laura Hahn, president of the San Francisco Women’s Political Committee

“Really, I don’t give much of a shit about one sad dude calling me a slut and a spy (for Newsom or Pinkerton Guards, depending on the year), but seeing some (not all) progressive men continue to put up with him was pretty demoralizing.”
– Anonymous volunteer on several progressive political campaigns

“The confrontation started because I came in to wish [ex-Supervisor and then-owner of the Buck Tavern] Chris Daly a happy birthday and have a drink, and H. asked Chris ‘Who the hell is she?’ To which Chris said, ‘She’s the President of the Harvey Milk Club.’ To which H began, ‘You’re not even gay, are you?’ I replied, ‘I’m queer.’ ‘Queer?!’ he said, ‘What the fuck is that? Some Shona Gochenauer shit? You’re not gay. I can tell you’re not gay by looking at you. She doesn’t know anything about politics. Look at her — she’s clearly just a vanity president.’ He said something about enjoying things because, “that ass isn’t gonna last forever, sweetheart. They [the other patrons in the bar] are only standing up for you because they want to fuck you.’”
– Stephany Joy Ashley, ex-president of the Harvey Milk LGBT Democratic Club

“As a purveyor of alcohol, I found that the man was a lawbreaking mooch and a pain to deal with.  As a woman, I found him pathetic, insulting, gross, or all three, depending on his mood. The first time I met him he cussed me out for an imagined slight in a way that was actually shocking — and it takes a lot for cuss words to flummox me. For a time, I simply refused to serve him.”
– Siobhann Bellinger, Buck Tavern bartender

“H. is a bully and a sexist. If you want to look at why the progressive movement is failing it’s because it alienates youth, women, and people of color. Deifying somebody like him is shutting women out, the message is they aren’t welcome. It’s not separated from the fact that progressives are really faltering right now with no leadership and very little inspiration.”
– Debra Walker, artist and longtime activist

“His behavior symbolized the running joke amongst some progressive men that women were there for their own entertainment to be mocked and harassed with no one blinking an eye. FUCK. THAT.”
– Anonymous ex-City Hall aide

These women – and the progressive men who were their allies – were not laughing at the hijinx of a mouthy old man. But people were, and they will be at the party that will be held in honor of Brown’s departure and attended by member’s of our city’s progressive elite.

Supporters say the guy’s behavior was a premeditated mockery of San Francisco’s political correctness, that he was an actor in the grand tradition of political theater. But if he is remembered by generations to come, it will be as the embodiment of an age-old archetype: the dude that other dudes keep around because he says the shit they can’t say to people who aren’t them. After all, who can control their own id?

Eskenazi compares Brown to F. Scott Fitzgerald and notwithstanding that both are writers, I’d like to posit an alternative historical precedent for Brown’s passionate trolling. Remember Bobby Riggs, the proud chauvinist who taunted tennis legend Billie Jean King until she wiped the floor with him in the widely broadcast Battle of the Sexes match? Man, that guy should have been in politics.

Brown was allowed to establish through constant bullying both online and off that only men have the right to feel comfortable in our city’s high-powered progressive circles. As San Francisco continues to cozy up with its new moderate identity, I hope he is remembered less for being a bon vivant and more as a sign that our once-vaunted avatars of progressivism were spending too much time pounding double shots at the Buck Tavern — while the world changed around them.