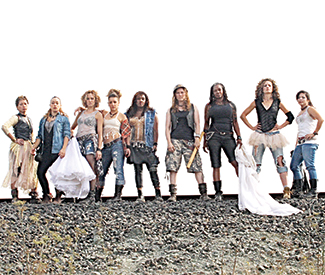 DANCE Sitting at her large desk overlooking the intersection of Mission and 24th Street, Krissy Keefer speaks eloquently and movingly about the genesis of Hemorrhage: An Ablution of Hope and Despair, the latest work for her 10-woman Dance Brigade Company.

Keefer is a dancer-choreographer-activist who has always enthusiastically plowed into the morass of the social, environmental, and political concerns of the day. Her works are issue-oriented, theatrically savvy, and entertaining, not least because of her sense of humor. Keefer may be deadly serious about her art, but she doesn’t take herself all that seriously.

But on a recent Saturday afternoon, as her crew prepared the main theater for a rehearsal of Hemorrhage, you couldn’t help but notice a note of fatigue, even despair, in her passionate takedown of the types of disasters that drain us of our humanity with ever-increasing frequency.

Keefer admits to being a news junkie. She has her ear to the ground, not just locally; she’s in tune with Midwest farmers who can’t plant crops because of the drought, multi-millionaire Chinese who leave their fellow citizens behind, and the survivors of Fukushima and Hurricane Sandy. Where are they, she wonders, how do people survive? “If you pay attention, you live with hope and despair. You obsess with hope, but what you feel underneath is actually despair. If you are not feeling some kind of despair, you are not paying attention.”

But couldn’t the increased flood of disaster information be the result of our sensationalist 24/7 news cycle? She doesn’t think so, believing instead that violent upheavals have actually become more frequent: “What we have done to the environment, [for instance], is completely despairing.” Included in her indictment are not only the governmental, corporate, and financial forces that act out of self-interest, but also a progressive movement that she believes has not acted strongly and decisively enough.

But Keefer’s major preoccupation at the moment is what she calls the “the corporate monsters — the last robber barons,” who are destroying a culture she has helped build. She lives and works in the Mission, and raised her daughter there. In the last 12 years, Dance Mission Theater has become a community institution, offering classes for adults and children, and providing affordable rehearsal and performance space. These days, when she looks through her office window and sees all those Silicon Valley-bound buses swarming past, she wants to pull out her hair.

“I feel very protective of the culture that we have created in San Francisco. You put layer upon layer on it, from the longshoremen, the Beat poets, the Black Panthers, the hippies, the gay and lesbian solidarity movement, feminism, the immigrant communities. It’s like layers of cheesecloth that you lay down, and this is the culture that came out of it. I participated in that, I am dedicated to it, and I am devastated by its being pulled apart.” Mincing no words, she adds, “It’s one of the cultures that keeps our country from sliding into fascism.”

So Keefer is stepping into the trenches as she always has done: as an artist. Walking into the theater, you realize this is the messiest set she (with Kate Boyd) has ever created. It’s one big junk pile, taking over half the theater and filling the bleachers from top to bottom. It makes you think of the outskirts of Mumbai and Manila, where thousands of people try to eke a living from whatever they can salvage. Where did Dance Brigade get the wheel drums, broken crock pots, fans, at least one bathtub, lace curtains, suitcases, Christmas tree ornaments, and enough body parts to reassemble several automobiles?

“We went to a wrecking yard,” Keefer laughs. “They deliver.”

Thinking of herself and her dancers as having been exiled from their city, as so many people have recently been, she envisioned Hemorrhage as a work about having to live on the edges. “Women always are more vulnerable during catastrophes,” she says, “because they take care of the children.”

For the script, she drew on her own writing but also that of fellow San Franciscans Rebecca Solnit (Hollow City: The Siege of San Francisco and the Crisis of American Urbanism) and performer-activist Guillermo Gómez-Peña, shaping it as a running monologue — a rant, a poem, a meditation, a political manifesto — that runs through the piece and ties it together.

And what do her nine women performers, most of whom have been part of Dance Brigade for close to 20 years, contribute? They sing, they shout, they play the drums, they dance; fiercely, proudly, unstoppably, full of hope, and full of despair. *

HEMORRHAGE: AN ABLUTION OF HOPE AND DESPAIR