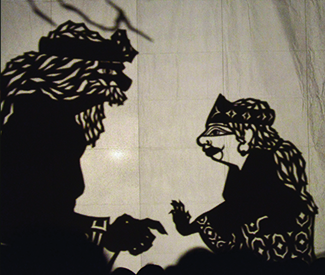 THEATER Last week’s performance of the shadow play Poro Oyna: The Myth of the Aynu, at Fort Mason’s Southside Theater, began with a blessing in disguise.

As members of the cast and of the Aynu community gathered onstage ahead of the performance, four Aynu men in black shirts and traditional headbands and necklaces prepared to sing and dance. As the elder of the four explained, shadow master Larry Reed, founder and longtime artistic director of Shadowlight Productions, had asked if the Aynu folks in attendance could offer a short blessing to start things off.

“I didn’t have a chance to tell Larry, we don’t do blessings,” confessed the man. “But we welcome people. And this is one of our most sacred dance stories; it’s about family,” he explained, adding that, with it, “we welcome you to our part of the world.”

So began a rare, gently moving, and altogether charming encounter three years in the making. Co-produced by Shadowlight and Tokyo-based shadow theater company Urotsutenoyako Bayangans, Poro Oyna: The Myth of the Aynu brought together traditional Aynu artists and musicians with masters of the shadow theater form in the US and Japan to share a mythological world at once distinctive and not so far from our own.

Adapted by OKI and Koyano Tetsuro, and directed by Larry Reed (the Bay Area’s master of a unique and potently cinematic style of modern shadow theater), the Aynu creation myth came to life on a stage and screen populated by a revolving and enrapturing set of images and figures. Some were drawn, some were embodied by actors in masks, some walked out before the screen onto the darkened lip of the stage, like living, breathing, three-dimensional shadows. And just as the imagery contained a surprising set of rich hues amid its black-and-white scheme, the English narration came generously colored with snatches of Japanese and Aynu.

Heavy in the mix was a transporting score created by a wonderful pairing of masterful musicians. Accomplished musician and recording artist OKI (who, in addition to adapting the story, also oversaw the art direction) provided live accompaniment on a pair of tonkori, the traditional plucked stringed instrument of the Aynu people, as well as offering the first springing, playful tones of the night on a mukkuri (a wooden mouth harp). Meanwhile, in entrancing, syncopated rhythms, the four members of the female vocal group Marewrew channeled the traditional Aynu musical form of upopo.

The Aynu (also spelled Ainu) are a small community of people living in Hokaiddo, Japan’s northern and second largest island. Indigenous to this area of morthern Japan as well as to nearby Russia, the Aynu have a culture that stretches back more than 3,000 years. Having faced centuries of oppression, including forced assimilation, their culture remains little known even inside Japan, and their language (which has no written form) is at risk of disappearing entirely, with fewer than 15 native speakers left alive.

A large proportion of these were on hand in the creation and delivery of Poro Oyna. The title, which means “the great story,” refers to the hero’s journey of Aynu Rakkur, the most powerful of all the gods. He is also a god who “smells like a human being,” born (as we see in the opening scene) from the incendiary coupling of his father, the god of thunder, and his mother, a great elm tree. Indeed, Aynu Rakkur is considered the progenitor of the human race.

In ensemble member Kawamura Koheisai’s impressive Balinese-inspired shadow designs, Aynu Rakkur’s shadow self is a black and white portrait of grace and resolve, a noble profile protruding from a finely drawn latticework of hair. He’s tough, goes his own way, and has a sly sense of humor. He lives beside Kaikaiunt, a sacred lake and the source of all life. One day a growling, cockeyed monster with a fearsome under bite and an unpronounceable name (rattled off in a long string of Aynu sibilants actually delighting to the ear) steals the Sun Goddess and plunges the world into darkness and a perpetual sleep from which many humans never awake.

As other lesser gods try and fail to wrest the sun from the clutches of the monster, Aynu Rakkur bides his time, doggedly carving away at something that turns out to be “a bear for a flat screen TV.” Finally taking umbrage at finding his front door pinned down with arrows and spears, he seeks out the monster and the two of them tumble deep down into the Underworld, where they battle for some six years.

The happy ending might have been expected, but it came, under the circumstances, with what felt too like an auspicious beginning.

“The people come back, the sun returns,” rejoices the narrator, “our sacred power is getting stronger every day.” *