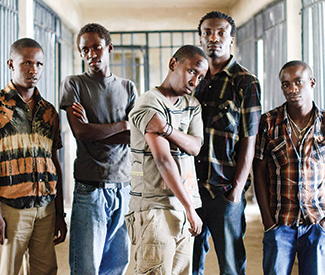 FILM This week, the African Film Festival National Traveling Series touches down at the Pacific Film Archive, bearing seven features and a number of shorts. The only film to have previous local distribution is Andrew Dosunmu’s Mother of George, about a Nigerian couple living in Brooklyn whose marriage is tested when the wife — played by Walking Dead badass Danai Gurira; her husband is Jim Jarmusch muse Isaach De Bankolé — fails to become pregnant with the son her in-laws demand. The gorgeous photography earned Bradford Young (who also lensed Ain’t Them Bodies Saints) a cinematography prize at last year’s Sundance Film Festival, and, appealing cast aside, his work is the main reason to catch George on the big screen.

The strongest film in the festival is the one that closes it: David Tosh Gitonga’s crime drama Nairobi Half Life, submitted by Kenya as its first Best Foreign Language Film contender last year. Though it didn’t make the Oscar shortlist (frankly, it was a tough year for foreign films, with Amour claiming all major accolades), it’s easy to see why it made the cut. It’s the not-unfamiliar tale of a rural dreamer named Mwas (the charismatic Joseph Wairimu) who sets out to pursue an acting career in the big city (“where the devil lives,” according to his mother). His improv skills are on point, but he is completely gullible, which makes him a prime target as soon as he arrives in “Nairobbery.”

Urban life offers many hard lessons, whether it’s Mwas finding his place in the gang he joins as a means of survival, or overcoming the snooty dismissals of the professional actors he enounters at theatrical auditions. In both realms, he gets in over his head, but he’s a quick thinker and a talented hustler, which gives him an edge his opponents tend to underestimate. If Nairobi Half Life‘s script leans a little heavily on Mwas being caught between two worlds (alternate title suggestion: Nairobi Double Life), its energy is infectious and its presentation is polished — props to producer Tom Twyker (1998’s Run Lola Run, 2012’s Cloud Atlas), whose One Fine Day Film Workshop guided its making.

Director Lonesome Solo’s more rough-hewn and downbeat Burn It Up Djassa also weaves a tale of desperation that culminates in violence, this time in Abidjan, the Ivory Coast’s largest metropolis. Again, there’s a conflicted young man at its center: Tony, or “Dabagaou” (as he’s known in the ‘hood), whose rise from cigarette seller to killer on the run is shared via a streetwise narrator who lays down story beats like a hip-hop version of Shakespeare; his scenes are the most cinematic amid what feels like an otherwise largely improvised effort. And indeed, Burn It Up Djassa builds to a tragedy of Bardian proportions. You’ll see it coming, but it’s wrenching nonetheless.

Death is the main character in Alain Gomis’ Dakar-set Tey, or “today,” which takes place in a world that resembles ours but with one key supernatural difference: Those who are about to die are given 24-hour advance notice. One morning, seemingly healthy fortysomething Satché wakes up with the grim knowledge that this is his last day. By the same mysterious power, those closest to him — his family, friends, a bitter former lover, and his wife (though not, it seems, his young children) — are also made aware. Though there’s a certain amount of wailing from his older relatives, Satché accepts his fate, drifting through a day that begins with a sort of living funeral, in which both praise and criticism are lobbed at him, and leads into a raucous street parade and hang time with friends.

As the day grows longer, it turns more melancholy; he visits the man who’ll be preparing his corpse for burial, who reminds Satché he’s lucky to know when his time is up so he has a chance to say his good-byes. But Tey isn’t a total bummer of a movie — it has a dreamy quality and moments of humor, as when Satché shows up late to a ceremony held in his honor, but can’t find anything to eat or drink at the completely pillaged catering table. That this dead man walking is played by American slam poet Saul Williams (though Satché is Senegalese) adds to his inherent outsider vibe. The ticking clock breaks down any forced politeness in his encounters, particularly with his wife, which gives us an idea of what he like was before he knew he was about to die.

End-of-life issues also dominate Akosua Adoma Owusu’s Kwaku Ananse, one of three films composing “Between Cultures: Recent African Shorts” (the other two, Faisal Goes West and the Quvenzhané Wallis-starring Boneshaker, were not available for preview; among the features, Damien Ounouri’s documentary Fidaï, a portrait of his Algerian freedom-fighting great uncle, was also unfortunately unavailable). Kwaku Ananse casts the West African trickster character, Anansi (Americans know him from classic children’s book Anansi the Spider: A Tale from the Ashanti), as its main character’s recently-deceased father. The young woman has come to his Ghanan village for his funeral, and to confront the second family he was keeping on the side. The 25-minute work slowly becomes more fairy tale-like as it progresses, anchored by a solemn but fiery performance by lovely star Jojo Abot.

Elsewhere in the fest, a mockumentary from Cameroon (banned in Cameroon, not coincidentally) about what would happen if the president suddenly disappeared (Le Président) is paired with short Nigerian doc Fuelling Poverty; both examine deep-seated corruption in troubled, post-colonial economies. And for a completely different audience (ages seven and up) is Rémi Bezançon and Jean-Christophe Lie’s Zarafa, the animated story of a young boy who escapes slavery in Africa and becomes enmeshed in the remarkable, mostly true story of the first giraffe to take up residence in France. *