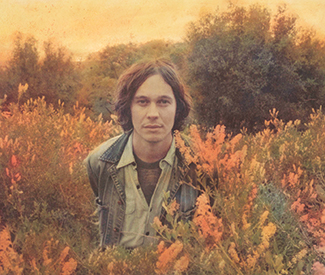 It’s been an adventurous four years for Ernest Greene. In 2009, the musician now known as Washed Out was producing music in his childhood bedroom, considering law school, and planning his wedding. Perry, Ga., is not widely known for its indie/electronica scene, so Greene posted music to his MySpace page and recorded it on a few cassette tapes for road trips. It was a low-key type of thing — until blogs like Pitchfork started paying attention.

This is about the time I became a fan. I was a freshman in college, brand-new to San Francisco, and Washed Out sounded like the future. Most mainstream electronic production at the time seemed made for rappers, or was heavily drum-and-bass influenced. Washed Out was all ’80s influences, hazy, and chilled out. “Retro lo-fi,” “dream-pop,” “synth-pop.” Chillwave is the genre most seem to have settled on — but two EPs, two studio albums, international tours, a deal with Sub Pop, and a Letterman appearance later, Greene doesn’t seem like he’s settling in any other way anytime soon.

“It really took me a couple of years to figure out my own approach to live shows, how to make them happen in a controlled way,” says Greene, 31. He’s currently touring in support of 2013’s Paracosm with a five-piece band (including his wife, Blair, on synth and vocals) — a notable departure from his beginnings as a bedroom artist with a DJ setup. He’ll bring the show to the Fillmore Jan. 28 and 29. “There were a couple of technological breakthroughs I had…where [earlier] some of the things I was doing in the studio, I wasn’t able to figure out how to accomplish live.”

Coming out from behind the computer screen has had its challenges, he says, but he’s committed to creating live music with a band rather than simply pressing play — a move that’s shifted his focus to vocal performance.

“In the studio, I could double my voice 100 times if I wanted to,” he says. “But if we’re on stage and it’s just five of us, by necessity it’s kind of stripped-down, and the live shows definitely have a different vibe because of that.”

“But harmonies have always been a pretty important part of the Washed Out sound,” he says. “When I first started the Washed Out project, actually, I wasn’t really thinking about singing myself — I was going to bring in someone else to sing, and I was just recording myself as a holding place. I didn’t feel like my voice was very good, so part of the process was layering a ton of different vocal takes on top of each other just to make it sound better. After a long period of doing that, it became the sound, and the music was discovered, and it kind of took on a life of its own.” Most of the vocals on the new record are still layered several times over, he says. Vocals, to Greene, are “just an instrument in the mix.”

A longtime friendship with electronic artist Toro Y Moi — Greene and Chaz Bundick met in school in Georgia — has also meant a like-minded artist to bounce ideas off of.

“He’s probably the most talented musician I’ve ever worked with — just a super creative guy,” says Greene. “We were really lucky that we started getting recognition around the same time, and eased into doing this professionally together…I didn’t have any contacts in the music business [starting out], and I remember having phone calls with him where we would catch up, [talk over] what we were going through. I didn’t have that with anyone else.”

“His music just keeps getting better and better,” Greene adds. “Plus all the guys in my band grew up with the dudes in the Toro Y Moi band, so it’s kind of like a big family.”

The first half of 2014 will see Washed Out touring nearly non-stop, including an appearance at Coachella. He’s ready for it. He’s energized by Paracosm, with its warm, lush instrumentation, its constructed sense of escapism — the album’s title itself refers to the concept of a fantasy world. That correlates heavily with the newer record’s vibrant visual art, he says, as opposed to the stark white design of 2011’s Within & Without.

“This newer stuff is a lot more vibrant-feeling, so the colors seem to suit it well,” he says. “It’s all about the music. That will lead the way most of the time.”