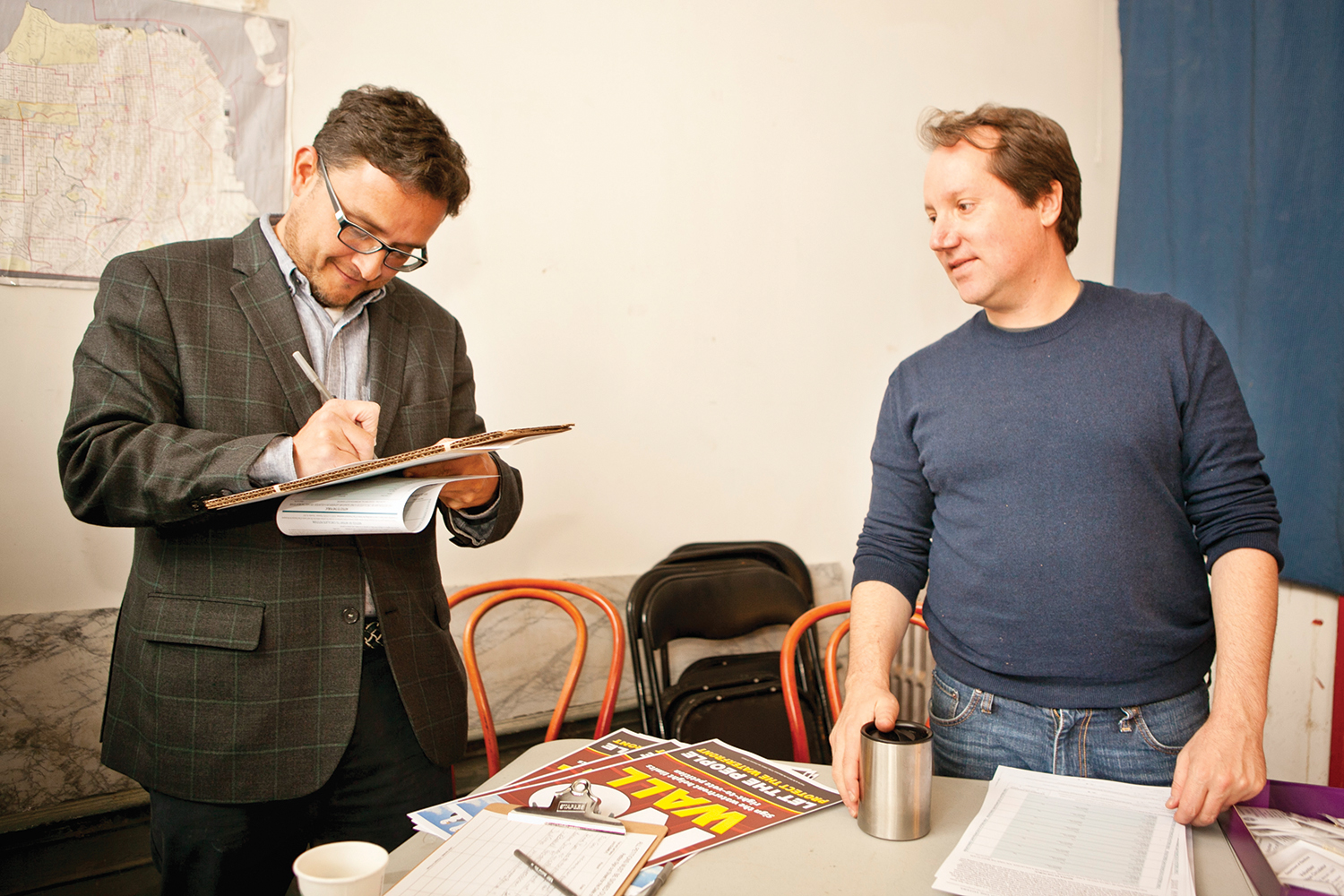 Who should decide what gets built on San Francisco’s waterfront: the people or the Mayor’s Office and its political appointees? That’s the question that has been raised by a series of high-profile development proposals that exceed current zoning restrictions, as well as by a new initiative campaign that has just begun gathering signatures.

Officially known as the Voter Approval to Waterfront Development Height Increases initiative, the proposal grew out of the No Wall on the Waterfront campaign that defeated Propositions B and C in November, stopping the controversial 8 Washington luxury condo tower in the process.

“The idea was to have a public process around what we’re going to do with the waterfront,” campaign consultant Jim Stearns told the Guardian.

San Franciscans have been here before. When developers and the Mayor’s Office proposed big hotel projects on the city’s waterfront, voters in 1990 reacted by approving Proposition H. It created a temporary moratorium on new hotels and required the city to create a Waterfront Land Use Plan to regulate new development, which was approved in 1997 and hasn’t been updated since.

It was an important transition point for the city’s iconic waterfront, which was still dominated by industrial and maritime uses when the Loma Prieta Earthquake of 1989 led to the removal of the Embarcadero Freeway and opening up of shoreline property controlled by the Port of San Francisco.

Ironically, then-Mayor Art Agnos supported a luxury hotel project at Seawall Lot 330 (which is now part of the proposed Warriors Arena project at Piers 30-32) that helped trigger Prop. H. Agnos stayed neutral on that measure and says he was supportive of setting clear development standards for the waterfront.

Today, Agnos is one of the more vocal critics of the Warriors Arena and how the city is managing its waterfront.

“What’s happened in the last three to four years is all those height limits have been abrogated,” Agnos said of the standards set by the WLUP. “With the sudden availability of big money for investment purposes, there is now funding for these mega-developments projects.”

The trio of high-profile projects that would be most directly affected by the initiative are the proposed Warriors Arena, hotel, and condos at Piers 30-32/Seawall Lot 330; a large housing and retail project proposed by the San Francisco Giants at Pier 48/Seawall Lot 337; and a sprawling office, residential, and retail project that Forest City wants to build at Pier 70. Each project violates parts of the WLUP.

“We need to let the people protect the waterfront and current height limits,” Agnos said, “because clearly there is no protection at City Hall.”

On a drizzly Saturday, Jan. 11, a few dozen activists crowded into the office at 15 Columbus Avenue, preparing to go collect signatures for the new waterfront initiative. It was a space that was already familiar to many of them from their fall campaign against height increases on the 8 Washington project.

“What we’re doing today is launching the next phase of that campaign,” campaign manager Jon Golinger told the assembled volunteers, calling this space “the center of the fight for San Francisco’s future.”

The campaign must collect at least 9,702 valid signatures by Feb. 3 to qualify for the June election, but Golinger said those involved in the campaign actually have six months to gather signatures if they want to wait for the November election.

Golinger said they would prefer June in order to build off of the momentum of the fall campaign and not get caught up in the more crowded November ballot. “There’s a lot of enthusiasm from the last election to ensure the waterfront gets the protection it needs,” he told us.

As for getting the necessary signatures, Golinger said he isn’t worried, noting that almost two years ago, he and other activists collected twice that many signatures — referendums require 10 percent of those voting in the last mayor’s race, but initiatives need only 5 percent — to challenge just the 8 Washington project.

Here, the stakes are much higher, spanning the entire seven-mile waterfront.

“We want the voters to have a say when a project goes beyond the rules that are in place,” said Sup. David Campos, the first elected official to endorse the measure and the first person to sign Golinger’s petition.

Campos also connected the campaign to the eviction crises and tenant organizing now underway, including the first in a series of Neighborhood Tenants Conventions taking place that day, culminating in a Feb. 8 event adopting a platform. “That struggle is part of this struggle,” Campos said. “We have to make sure we’re working collectively.”

The official proponent of the initiative is Becky Evans, who has been working on issues related to San Francisco’s waterfront for more than 40 years. “I remember walking along the waterfront with Herb Caen back in the ’70s,” she said of the late San Francisco Chronicle columnist for whom the promenade on the Embarcadero is now named.

Evans is a longtime Sierra Club member who also served on the city’s first Commission on the Environment, and she believes the shoreline is a critical intersection between the city’s natural and built environments, one where the citizens have an active interest.

“I think the 8 Washington process — including the petition gathering and the vote — awoke a bunch of people to making a difference in what happens to the city,” Evans told us, calling the waterfront a defining feature of San Francisco. “For many people, our skyline is the bay, not the buildings.”

The initiative has few overt critics at this point. Both city and Port officials refused to comment on the measure, citing a City Attorney’s Office memo advising against such electioneering. “I’m incredibly limited as to what I can say,” the Port’s Brad Benson told us.

And none of the spokespeople for the affected development projects wanted to say much. “We’re taking a wait and see attitude,” PJ Johnston, a spokesperson for the Warriors Arena, said when he finally responded to several Guardian inquiries.

That project is just launching its environmental studies, which was the subject of a public scoping meeting on Jan. 13. Slaughter did tell us that “right now, the majority of the site doesn’t have an established height limit,” a reference to the fact that most of the site is zoned for open space with no buildings allowed.

Diane Oshima, associate director of waterfront planning at the Port, told us that during the adoption of the WLUP, “We did not broach the subject of changing any height limits.” But the plan itself says that was because tall buildings weren’t appropriate for the waterfront.

“Maintain existing building height and bulk limitations and encourage building designs that step down to the shoreline,” is the plan’s first design objective. Others include “Improve views of the working waterfront from all perspectives” and “Remove certain piers between Pier 35 and China Basin to create Open Water Basins and to improve Bay views.”

The plan also specifies acceptable uses for its various waterfront properties. Residential isn’t listed as an acceptable use for either Pier 48 or Seawall Lot 337, both of which are slated mostly for open space and maritime uses. Office space and entertainment venues are also not deemed allowable uses on either property, although it does list retail as an allowable use on Pier 48.

By contrast, Piers 30-32 and the adjacent Seawall Lot 330 were envisioned by the plan to allow all the uses proposed for it: “Assembly and Entertainment” and retail on the piers and residential, hotels, and retail on the property across the street — but not at the heights that are being proposed.

The plan calls Pier 70 a “mixed use opportunity area” that allows most uses, but not hotels or residential, despite current plans that call for construction of about 1,000 homes at the site to help fund historic preservation efforts.

Slaughter answered questions about her project’s lack of compliance with the WLUP by saying, “The whole project is going through a community planning process.”

Yet Agnos said that neither that process nor the current makeup of the Port or Mayor’s Office can get the best deal for the public against rich, sophisticated teams of developers, investors, and professional sports franchises.