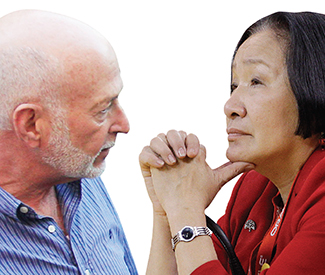 Dan Siegel, an Oakland civil rights attorney and activist with a long history of working with radical leftist political movements, joined a group of more than 150 supporters in front of Oakland City Hall on Jan. 9 to announce his candidacy for mayor.

With this development, the mayor’s race in Oakland is sure to be closely watched by Bay Area progressives. Siegel’s bid represents a fresh challenge from the left against Mayor Jean Quan at a time when concerns about policing, intensifying gentrification, and economic inequality are on the rise.

Siegel is the latest in a growing list of challengers that includes Joe Tuman, a political science professor who finished fourth in the 2010 mayor’s race; Oakland City Councilmember Libby Schaaf; and Port Commissioner Bryan Parker.

In a campaign kickoff speech emphasizing the ideals of social and economic justice, Siegel laid out a platform designed “to make Oakland a safe city.” But he brought an unusual spin to this oft-touted goal, saying, “We need people to be safe from the despair and hopelessness that comes from poverty and long-term unemployment. We need safety for our tenants from unjust evictions and … gentrification.”

He spoke about pushing for improvements in public education “to level the playing field between children from affluent backgrounds and children from poor backgrounds,” and described his vision for reorganizing the Oakland Police Department to foster deeper community engagement.

Among Siegel’s supporters are East Bay organizers with a deep history of involvement in social justice campaigns. His campaign co-chair is Walter Reilly, a prominent Oakland National Lawyers Guild attorney who said he’s been involved with civil rights movements for years. “This is a continuation of that struggle,” Reilly told the Bay Guardian, adding that leadership affiliated with “a progressive and class-conscious movement” is sorely needed in Oakland.

Left Coast Communications was tapped as Siegel’s campaign consultant. Siegel’s communications director is Cat Brooks, an instrumental figure in Occupy Oakland and the grassroots movement that arose in response to the fatal BART police shooting of Oscar Grant, whose Onyx Organizing Committee is focused on racial justice issues.

Olga Miranda, an organizer with San Francisco janitors union, SEIU Local 87, also spoke on Siegel’s behalf during the kickoff event. “San Francisco has become for the rich, and we understand that,” she said. “But at the same time, Oakland isn’t even taking care of its own.”

Referencing a recent surge in Oakland housing prices due in part to an influx of renters priced out of San Francisco, she added, “Dan understands that if you live in Oakland, you should be able to stay in Oakland.”

Siegel’s decision to challenge Quan for the Mayor’s Office has attracted particular interest since he previously served as her legal advisor, but their relationship soured after a public disagreement.

In the fall of 2011, when the Occupy Oakland encampment materialized overnight in front of Oakland City Hall, Siegel resigned from his post as Quan’s adviser over a difference in opinion about her handling of the protest movement. Police crackdowns on Occupy, which resulted in violence and the serious injury of veteran Scott Olsen and others, made national headlines that year.

“I thought that the Occupy movement was a great opportunity for this country to really start to understand the issues of inequality in terms of wealth and power,” Siegel told the Bay Guardian when queried about that. “And I thought the mayor should embrace that movement, and become part of it and even become a leader of it. And obviously, that’s not what happened.”

Since then, his relationship with Quan has been “Cool. As in temperature, not like in hip,” he said during an interview. “I don’t want to make this personal. But we have a difference about policy and leadership.”

With Oakland’s second mayoral election under ranked-choice voting, the race could prove fascinating for Bay Area politicos. Also called instant runoff voting, the system allows voters to select their first, second, and third choice candidates. If nobody wins more than 50 percent of the vote, the last-place candidates are eliminated in subsequent rounds and their vote redistributed until one candidate crosses the majority threshold.

Quan, who ran on a progressive platform in 2010, was elected despite winning fewer first-place votes than her centrist opponent, former State Senate President Don Perata. She managed to eke out an electoral victory with a slim margin (51 percent versus Perata’s 49), after voting tallies buoyed her to the top with the momentum of second- and third-place votes, many gleaned from ballots naming Councilmember Rebecca Kaplan as first choice.

Early polling conducted by David Binder Research showed Quan to be in the lead with the ability to garner 32 percent of the vote, as compared with 22 percent for Tuman, who placed second. That’s despite Quan’s incredibly low approval ratings — 54 percent of respondents said they disapproved of her performance in office.

When Schaaf announced her candidacy in November, Robert Gammon of the East Bay Express opined, “Schaaf’s candidacy … likely will make it much more difficult for Quan to win, particularly if no true progressive candidate emerges in the months ahead.” But Siegel’s entry into the race means there is now a clear progressive challenger.

The Guardian endorsed Kaplan as first choice in 2010, and gave Quan a second-place endorsement. While there has been some speculation as to whether Kaplan would run this time around — the David Binder Research poll suggested she would be a formidable opponent to Quan — Kaplan, who is Oakland’s councilmember-at-large, hasn’t filed.

Siegel, meanwhile, cast his decision to run as part of a broader trend. “I feel that not only in Oakland, but across the country, things are really ripe for change,” he told the Guardian.

Indeed, one of the biggest recent national political stories has been the election of Kshama Sawana, a socialist who rose to prominence during the Occupy Wall Street movement, to the Seattle City Council.

“When you have a city like Oakland where so many people are in poverty or on the edge of poverty, or don’t have jobs or face evictions,” Siegel told us, “it’s no wonder that the social contract falls apart. It seems to me that what government should do is elevate the circumstances of all people, and particularly people who are poor and disadvantaged.”