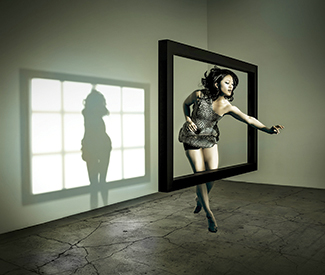 DANCE The fourth FRESH Festival sounds like something that might attract foodies. In fact you do need an appetite — for thinking way outside of the box. The participating dancers, musicians, designers, and writers feed on each other’s disciplines to stretch their own thinking about who they are and what they want to do. If sometimes the “how” intrigues more than the “what,” so be it. Watching new modes emerging can be such an upper.

The opening weekend (Jan. 3-4 at Kunst-Stoff Arts) presented three dancer-choreographers who took the audience into what was, for me, terra incognita. The trip was more than worth it. What impressed in Christine Bonansea’s Floaters #1, Sara Shelton Mann’s Hybrid 3, and ALTERNATIVA’s apparition was the clarity of purpose, and how — though by no means “choreographed” — these experiments were steeped in a dancer’s awareness of the body.

Bonansea structured her site-specific film noir Floaters #1 into four loosely connected sections that opened with a murky image of herself that fused with the dancer slithering down a fire escape. Thrown into pitch-black darkness, she trotted around the audience seated center stage. The dancer could have been a speed skater except that her feet hammered out percussive patterns (perhaps done in point shoes). Here Bonansea was present as sound — just like those ominous steps in the night we know from crime flicks. In the most dancerly part of the piece, she put her exceptionally lithe and pliable body into black tights, aviator glasses, and a sequined helmet to metamorphosize into scintillating, indefinable creatures — animals, plants, humans, and robots. And then she simply slipped away.

Mann, with her calm demeanor and smoky voice, sat herself center stage and read a manuscript — a script for a show she is planning — that roamed around a universe of autobiography, natural history, and feelings personal and social. All you could do was follow her along on the ride. And what a pleasure it was, to enter a mind like hers.

For apparition, ALTERNATIVA — Kathleen Hermesdorf, a brilliant performer, and longtime collaborator Albert Mathias — used video technology to play with concepts of reality. Almost like a shaman, Hermesdorf both fought and collaborated with those fragile images. Effects “sliced” her torso into layers, so that her shadow looked more reflective of her humanity than her bodily presence. With a flick of her wrist, she also turned a sewing machine, that ultimate tool of domestication, into a sputtering machine gun. If that was not turning reality inside out, and upside down, I don’t know what is.

Across the city at Z Space, scenic and lighting designer Matthew Antaky once more worked his magic with Liss Fain Dance for Fain’s new, intensely private After the Light, inspired by fragments of Virginia Woolf’s writing. Antaky surrounded a square stage space with a series of arbors through which the audience watched the dancers — who, in contrast to the elegant set, wore undershirts, pants, and suspenders (by Mary Domenico). Again we were invited to walk around with the promise of multiple perspectives. Most of us stayed stationary and become visual elements within the set’s graceful arches. The coexistence of an easy formality with casualness, however, set a welcoming tone for another of Fain’s intelligent rethinkings of literary sources.

Excerpts from The Waves (read by Marty Pistone and Val Sinckler) interwove with Dan Wool’s original score; together they generated and commented on the choreography. A few tiny narratives emerged. The heat rose momentarily to party level to the strains of Mendelssohn as the dancers (in their suspenders) remembered ballet phrases. It was a charmingly telling moment, because in the back of Fain’s mind ballet is ever present, though she rarely uses its vocabulary. Hers is a deep but not literal kinship to the tradition.

Once, all six dancers broke into a series of side hops as if engaged in a game. At another spot two people “died” and were mourned with an encircling dance by sister team Shannon Kurashige and Megan Kurashige. But these moments evaporated, leaving no traces — perhaps like memories, perhaps like passing thoughts. My sense, however, is that better familiarity on my part with the text might have yielded more insights on just how Fain used her literary sources.

Her dancers are individualists — wonderful to watch in unisons when circling the stage or hanging on to each other in a chain or a follow-the-leader section. In repeated duets the lanky Jeremiah Crank partnered a short and fierce Carson Stein, while tall Katharine Hawthorne paired with compact Alec Lytton (who promptly flipped her). One of After’s particularly intriguing traits was a plethora of unexpected stops and broken connections, with dancers waiting and watching from the sidelines much like we did. At times you felt that these people knew each other, but their encounters also seemed controlled by serendipity, as if they just happened to bump into each other. *