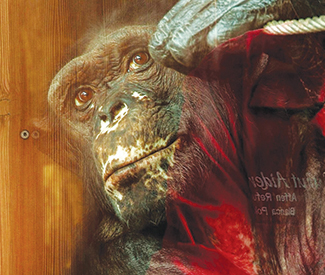 FILM It’s January, and our premiere German language film festival, Berlin and Beyond, is back to its rightful place on the cinematic calendar after a year off for regrouping, kicking off the neues Jahr with films from Germany, Austria, and Switzerland — as well as Turkey and France.

It’s not a bad way to begin 2014, unless your resolutions happen to be cutting back on bier and weltschmertz. Even though the B&B selections feel a bit dated — thanks, perhaps, to that one-year hiatus — there are still a few solid picks, including the Oscar-shortlisted Two Lives (2012). The documentary slate also holds plenty of appeal, with films that explore the globally human instincts to interfere, to intervene, and to seek atonement.

Swiss-German-Austrian documentary More Than Honey (2012) offers an alarmingly frank exposé of the ongoing demise of the domesticated honeybee from California to China, and the implications that this population implosion holds for the future of food production. Honey bumbles onscreen like a bee in flight, seemingly directionless yet always with purpose. Director Markus Imhoof weaves his family’s own history of beekeeping with that of modern-day bee husbandry, comparing the techniques of his ancestors with the equally old-school methods employed by elderly Swiss beekeep Fred Jaggi; the industrial-scale beekeeping of “nomadic” John Miller, who transports his bees cross-country each year to pollinate crops from Northern California to North Dakota; and the renegade experimentation with fearsome “killer bees” employed by Arizona-based Fred Terry, who equates Americans’ fear of Africanized bees to our more generalized fear of invasion.

Squeamish masses beware, you will be subjected to extreme close-ups of larval chambers, mid-air bee sex, and ruthless varroa mite infestations, while getting more information about queening, foulbrood, hand pollination, and bee-whispering than you probably realized existed. Like raw honey, the film is both sweet and murky, and the prospects for peaceful cohabitation with a creature driven to possible extinction thanks to our careless treatment of its preferred habitats, which also happen to be where all of our food is grown, don’t appear to be weighted on the side of good news.

One documentary with no less a fascinating premise, albeit a less polished presentation, is Miles and War (2013), which highlights the working life of professional conflict mediators. A side project filmed and directed by Anna Thoma — who has worked as a videographer for the Centre for Humanitarian Dialogue, and therefore had privileged access to three of the Centre’s top mediators — Miles dives into conflict regions, where mediators arrange meetings between warlords or rebel factions and hammer out agreements between them in painstakingly slow increments. Or, as Centre co-founder and former Executive Director Martin Griffiths observes halfway through a negotiation so secret even Anna is not allowed to be in the room, “You need to be a lot more patient than you want to be, because everything is going to take so much longer than it needs to.”

In truth, because mediation is a confidential process, Thoma’s film winds up on the sidelines more often than not, a so-close-yet-so-far teaser of the tense, often solitary downtime between mediations, seemingly composed of endless one-sided phone calls, plane flights, and scheduling blips.

“It’s a life controlled by others,” Griffiths tells Thoma almost ruefully, before slipping away to his secret meeting. “[Waiting] for someone to say yes.”

Another love letter to an institution is Redemption Impossible, aka Unter Menschen (2012), a layered portrait of a group of “retired” lab chimps at Gut Aiderbichl, an Austrian animal sanctuary. After being infected with HIV and hepatitis, the chimps were isolated and experimented on by pharmaceutical company Immuno-AG, for several years, in a bid to discover an AIDS vaccine. When Immuno was taken over by Baxter in 2002, the vaccination trials ended, but the issue of where to send the infected, unsocialized lab chimps became an open controversy. After the chimps were shuffled around in various states of limbo, championed by their self-effacing caretaker Renate Foidl and her small staff of bright-eyed, ponytailed assistants, their care was taken on by GA in 2009, and their conditions increasingly improved upon.

Though the first half-hour of the film is a bit slow going — with real-time footage of the laborious, day-to-day care of the chimps, some of whom still live in isolation, too traumatized to be in the same room with their peers — the tale of the cloak-and-dagger intrigue surrounding their illegal importation into Europe adds a crime thriller dimension to the primates’ unfortunate plight. Money and influence, of course, is the root of this evil, and the implicated players represent a broad spectrum of political figures, big pharma, game poachers, and even wildlife conservation organizations.

But ultimately it’s the gradual rehabilitation of the chimps themselves that provides the documentary’s real human interest, and watching them step into the sunlight for the first time in 30 years is a triumphal catharsis.

“To me this does not really ‘make up for things’,” Foidl explains emotionally as she watches the outdoor play space being built after years in the planning stages. “It’s awful what was done to them. It can’t be undone … I don’t think there can be any talk of ‘redemption’.” Perhaps not, but compassion, it would appear, can still command a central role. *

18TH BERLIN AND BEYOND FILM FESTIVAL