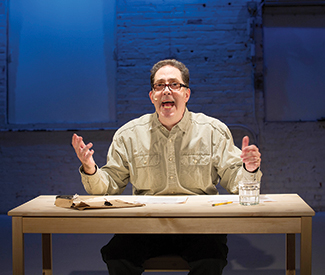 THEATER New York early last week was as cold as Muazzez. True, I’ve never been to Muazzez, but a reputable source called that asteroid “so cold it is a frozen bull roar,” which sounds about right.

“They lied to me about the reality of things here on Muazzez,” began said source, a nondescript speaker seated at a bare wood desk. “About the foundations of these, their basis, their fundament, the profound bottom of things.”

There’s a glass of water on the desk, some loose paper.

“I am an Abandoned Cigar Factory (or ACF),” he goes on to explain, “groaning in the dunes near the settlement of Culpepper.”

The unexpected narrator at the bare wood desk sat in a bare white room, with the incongruous name of the Chocolate Factory (in fact, a terrific theater in Long Island City). The play, called Muazzez, originated as a collection of short stories (all set on asteroids) by Mac Wellman, a writer better known as a playwright and a leading light of the American experimental scene (and a prolific one too, despite receiving few productions in the Bay Area).

Performed with a forthright, faintly odd, wholly captivating precision by longtime collaborator Steve Mellor, Muazzez (directed by Wellman) is an intoxicating and deceptively subdued flight of language and weirdness whose cumulative power, over the course of its brisk 40 minutes, is hard to describe and harder to shake off. Its surface meanings can seem strange, obscure, dryly amusing, even piffling — still, there are things shifting down below in some grim molten core. It was a feeling similar to that produced by one of James Tate’s poems.

Muazzez set the tone well. Expecting the unexpected became second nature over the course of last week’s sampling of shows from PS 122’s COIL (which presented Muazzez), as well as from the Public Theater’s Under the Radar, and Ben Pryor’s American Realness — all together just three (!) of the lively and significant New York festivals that now swirl each January around the annual meeting of the Association of Performing Arts Presenters (or “A-PAP,” as it’s usually pronounced).

Bees are in short supply these days, so better to say the presenting industry’s international confab is a kind of honey pot attracting bears in the performing arts world, by which we mean the artists wrapped in faux fur coats and puffy jackets against the bracing, angry wind and plummeting temperatures of last week’s “arctic blast” (itself just another signal from the larger natural order of things that humanity is wildly off course — or right on target, I guess, depending on your end goal.)

This context heightened the urgency folded into Muazzez‘s extraterrestrial transmission. And there were other, comparable transmissions, including one from the future, articulated in the person and voice of TV’s Captain Kirk. Co-presented by COIL and the New Ohio Theatre, An Evening with William Shatner Asterisk takes place on a stage inhabited by a central flat screen TV on wheels and two larger screens on either side. Onto the center screen comes the iconic image of TV’s starship commander and over-actor par excellence.

Suddenly he speaks — in a funny but vaguely disconcerting stagger of assembled speech bites, culled from the character’s entire lexicon, the actor’s “body” of work. The captain has been commandeered. Someone or something else from beyond (beyond this time and beyond language) is speaking to us through him. The transmission, spelled out on the far screens, comes in segments or “chapters,” and has a philosophical cast: a discussion of the differences between art and science. Its purpose, we are told, is to convey a message to us from the future, which alone knows where we are headed. The message itself (the beautifully written text is by Joe Diebes; the excellent audio-visual scheme by Rob Ramirez) is prefaced and forestalled, in a half-teasing fashion, by a discussion of some basic terms.

The performance’s sole human figure, meanwhile — other than two-dimensional James T. — is an expressionless Japanese woman (an imposingly restrained Mari Akita) who moves the wheeled screen slowly about the stage, illustrates a point or two with a few simple movements, and, in one deceptively incongruous moment, picks up a microphone to deliver (in subtitled Japanese) a monologue about coming to the United States and falling obsessively into the world of drag queens and female impersonation.

Hilarious yet eerie, playful yet purposeful, oblique yet precise, conceiver-director Phil Soltanoff’s An Evening with William Shatner Asterisk proved a dialectical delight; and in its teasing manner and final indirect plea for some small but profound transcendence, it was, pardon the expression, fascinating.

In another wonderfully estranging but altogether earthbound offering, COIL teamed up with American Realness and New York City Players (the latter seen at Yerba Buena Center for the Arts last February with its co-production of Early Plays by Eugene O’Neill) to co-present writer-director Tina Satter’s offbeat, sharp-footed House of Dance (in association with Satter’s own company, Half Straddle, and the Abrons Art Center).

Set in a small New England tap studio among four fractious, serious, and seriously oddball tap dance competitors (played with a combination of understated delivery and irresistible flair by Jess Barbagallo, Elizabeth DeMent, Jim Fletcher, and Paul Pontrelli), the 60-minute House of Dance trumps the hackneyed pomp of reality television with the heightened banality of its obscure, ego-invested lives — who do in fact dance the hell out of their tap shoes.

These startling moments evoked a real joy too, a flight from obscurity into a greatness no championship trophy could hope to convey — at once so light, so personal, yet communal, it made one realize this piece could only make sense as a live performance. And feel sorry for those people who did not venture out this night, but stayed indoors against the howling cold. *