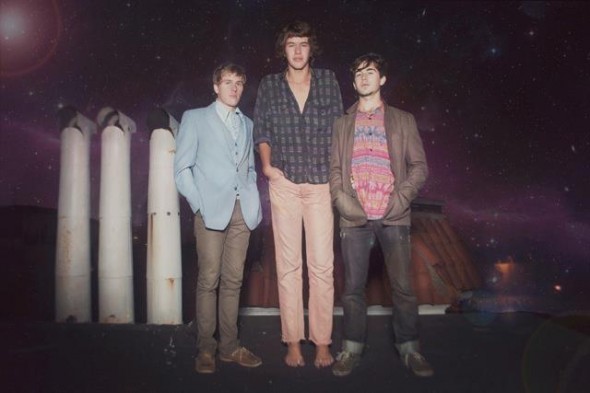 Happy Monday, kids! If you’re feeling the comedown from a solid week of shows celebrating the Rickshaw Stop’s 10th anniversary (read our feature on it here), quit yer whining. Here are a handful of rad upcoming shows to get you out of the house. It’s winter, you’re pale, you need to.

Black Cobra Vipers are an SF-based art-rock trio in which two of three members were jazz majors (bassist Julian Borrego and drummer Rob Mills), a fact which announces itself both through the band’s technical abilities, and through its (mostly) controlled chaos. There are slowed-down funk numbers here; there are nods to ’70s psyche masters; there’s hard-driving, danceable rock and roll, with singer/guitarist Gregory DeMartino’s howls at the helm. Weird enough to keep you guessing, but just poppy enough to get their riffs stuck in  your head, the guys are a quarter of the way through a monthlong residency at the Chapel, so you have three more chances to become a fan.
With French Cassettes, The Netherfriends
The Chapel
777 Valencia, SF
www.thechapelsf.com

Connan Mockasin
Listening to Connan Mockasin’s “Forever Dolphin Love” (in particular the post-climax/comedown attuned “Rework” by Erol Alkan) for the first time gave me a strange sense of primed nostalgia: it wasn’t that I’d heard the song a hundred times in the past, but the instant recognition that I would be listening to it for the inevitable future. A couple of years later I certainly have, along with the album it came off of and Mockasin’s latest platter of psych pop, Caramel, a Moebius strip of a concept album (based around the concept of what an album entitled “Caramel” would sound like.) But the New Zealand weirdo musician/Ariel Pink doppelganger is only now popping up on a US tour, seemingly having been on an extended European engagement supporting Charlotte Gainsbourg following his underrated guitar work on her Stage Whisper album.   (Ryan Prendiville)
With Disappearing People, Faux Canada
9pm, $10-12
Bottom of the Hill
1233 17th St, SF
www.bottomofthehill.com

Parquet Courts
Though the band may reside in NYC, the lyric “there’s billionaire buses on my unlit street” should hit close enough to home (if not right on the nose) to remind that Brooklyn isn’t that far away. Full of riffs both frenetically punk and spaciously melodic, Parquet Courts’s Light Up Gold is one of last year’s best. A deceptively effortless mix of slacked out rock songs, it’s a witty blend, with thankfully enough cleverness to know when to be dumb (while doing the inevitable references to Messrs. Reed, Richman, and Malkmus justice.) “Stoned and Starving” has got all the necessary hooks to deliver on a subject that needs no further explanation, but it’s “N. Dakota,” a probably unnecessary but totally enjoyable state-wide diss (with lines like “in Manitoba they call it boring / at night we hum to Canada snoring”) that’s still on replay. (Ryan Prendiville)
With White Fence (co-headliner), CCR Headcleaner
8pm, $16
Great American Music Hall
859 O’Farrell, SF
www.slimspresents.com

Fri/17
Bad News
Replicant Presents’ electronic and experimental noise reaches into Oakland again with a dose of “weird core,” industrial and straight-up sounds out of a horror-film soundtrack. BR-OOKS will have the home-court advantage and push the boundaries of any genre, then the more palpable Names will bring a dancier, more rhythmic approach, while maintaining roots in the realm of noise. But the true industrial strength will be heard when Bad News takes over. This commanding SF/LA guitar and synth duo, comprised of Sarah Bernat and Alex Lukas, should whip you into shape with sounds of precision and perfection. But before they totally slay you, you’ll reflect on any angst past or present and why it feels so right. Look for their new material in 2014! (Andre Torrez)
With Names and BR-OOKS
9pm, $7
The Night Light
311 Broadway, Oakland
www.thenightlightoakland.com
Sun/19
Queer/Trans* Night
Celebrate being queer in the New Year with Gilman’s first Queer/Trans* Night of 2014, when MC Per Sia hosts a night of hard-hitting punk from some of the coolest queers in Bay Area music. The show features masked trio Moira Scar, San Cha, DADDIE$ PLA$TIC, Oakland punks Didisdead, post-punk duo Bestfriend Grrlfriend, and Alice Cunt all the way from LA. Show goers can also look forward to DJ Johnny Rose and a video booth by Lovewarz. This is a safe and sober show, so leave the booze and drugs at home, as well as any racism, misogyny, transphobia, or homophobia. (Kirstie Haruta)
5pm, $5 + $2 membership
924 Gilman St.
924 Gilman, Berkeley
www.924gilman.org