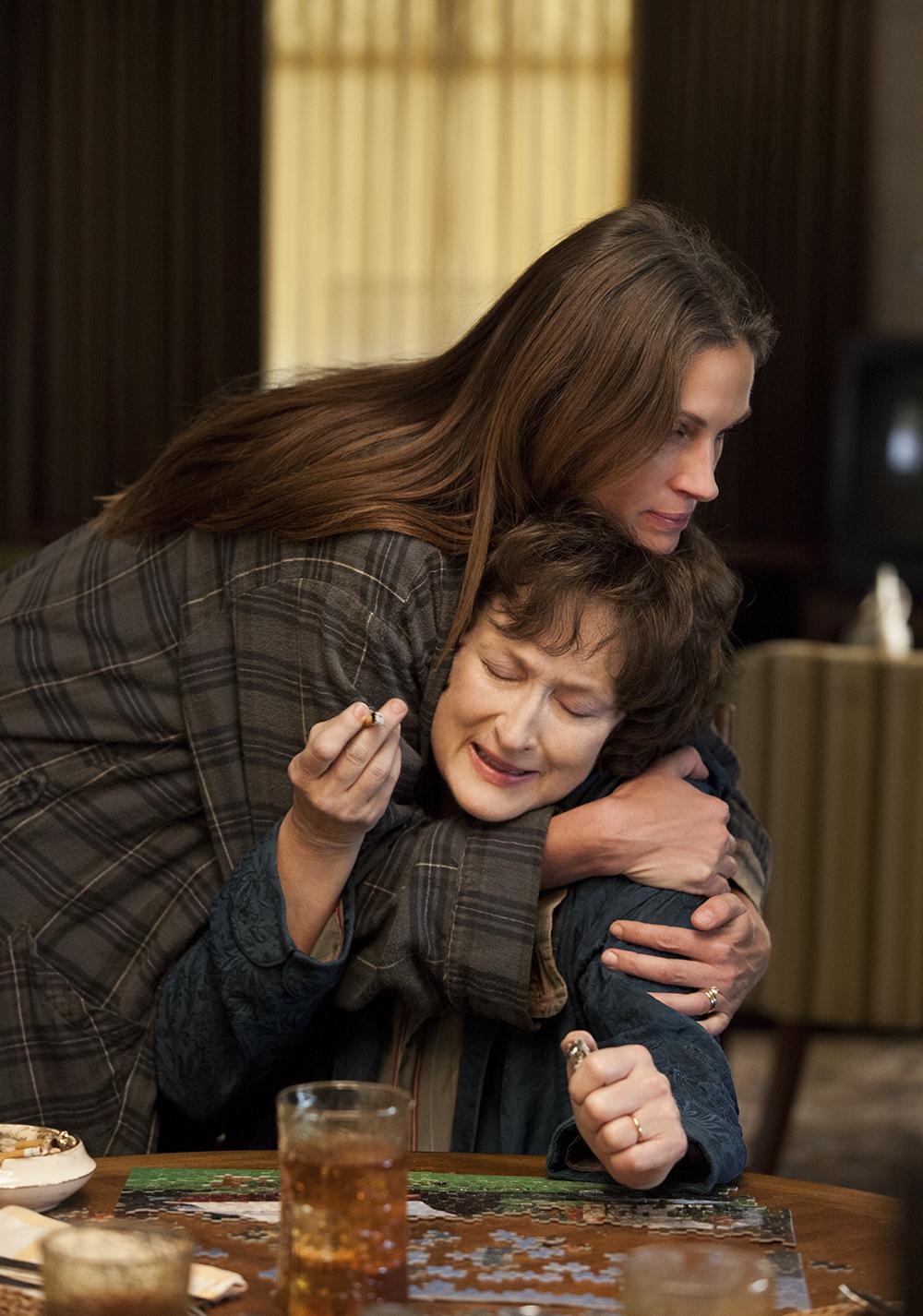 This week: August: Osage County (bumped from its previously-scheduled opening last week) unleashes 2014’s first bolt of LOOK AT ME I’M ACTING! Other choices you have while you count down to the Golden Globes (Sunday night) and the Oscar nominations (next Thursday) include Ralph Fiennes’ latest actor-director turn in Charles Dickens tale The Invisible Woman; Mark Wahlberg’s Navy SEALs drama Lone Survivor; and Renny Harlin’s CG’d-up action-tacular The Legend of Hercules.

August: Osage County Considering the relative infrequency of theater-to-film translations today, it’s a bit of a surprise that Tracy Letts had two movies made from his plays before he even got to Broadway. Bug and Killer Joe proved a snug fit for director William Friedkin (in 2006 and 2011, respectively), but both plays were too outré for the kind of mainstream success accorded 2007’s August: Osage County, which won the Pulitzer, ran 18 months on Broadway, and toured the nation. As a result, August was destined — perhaps doomed — to be a big movie, the kind that shoehorns a distracting array of stars into an ensemble piece, playing jes’ plain folk. But what seemed bracingly rude as well as somewhat traditional under the proscenium lights just looks like a lot of reheated Country Gothic hash, and the possibility of profundity you might’ve been willing to consider before is now completely off the menu. If you haven’t seen August before (or even if you have), there may be sufficient fun watching stellar actors chew the scenery with varying degrees of panache — Meryl Streep (who else) as gorgon matriarch Violet Weston; Sam Shepard as her long-suffering spouse; Julia Roberts as pissed-off prodigal daughter Barbara (Julia Roberts), etc. You know the beats: Late-night confessions, drunken hijinks, disastrous dinners, secrets (infidelity, etc.) spilling out everywhere like loose change from moth-eaten trousers. The film’s success story, I suppose, is Roberts: She seems very comfortable with her character’s bitter anger, and the four-letter words tumble past those jumbo lips like familiar friends. On the downside, there’s Streep, who’s a wizard and a wonder as usual yet also in that mode supporting the naysayers’ view that such conspicuous technique prevents our getting lost in her characters. If Streep can do anything, then logic decrees that includes being miscast. (2:10) (Dennis Harvey)

The Legend of Hercules Renny Harlin rises from the dead to direct Twilight series hunk Kellan Lutz in this 3D, CG-laden retelling of you know which myth. (1:38)

Lone Survivor Peter Berg (2012’s Battleship, 2007’s The Kingdom) may officially be structuring his directing career around muscular tails of bad-assery. This true story follows a team of Navy SEALs on a mission to find a Taliban group leader in an Afghani mountain village. Before we meet the actors playing our real-life action heroes we see training footage of actual SEALs being put through their paces; it’s physical hardship structured to separate the tourists from the lifers. The only proven action star in the group is Mark Wahlberg — as Marcus Luttrell, who wrote the film’s source-material book. His funky bunch is made of heartthrobs and sensitive types: Taylor Kitsch (TV’s Friday Night Lights); Ben Foster, who last portrayed William S. Burroughs in 2013’s Kill Your Darlings but made his name as an officer breaking bad news gently to war widows in 2009’s The Messenger; and Emile Hirsch, who wandered into the wilderness in 2007’s Into the Wild. We know from the outset who the lone survivors won’t be, but the film still manages to convey tension and suspense, and its relentlessness is stunning. Foster throws himself off a cliff, bounces off rocks, and gets caught in a tree — then runs to his also-bloody brothers to report, “That sucked.” (Yesterday I got a paper cut and tweeted about it.) But the takeaway from this brutal battle between the Taliban and America’s Real Heroes is that the man who lived to tell the tale also offers an olive branch to the other side — this survivor had help from the non-Taliban locals, a last-act detail that makes Lone Survivor this Oscar season’s nugget of political kumbaya. (2:01) (Sara Maria Vizcarrondo)

Liv and Ingmar You wouldn’t expect anything less than soul-scorching intimacy from a documentary on the relationship of acting icon Liv Ullmann and moviemaking maestro Ingmar Bergman. And Dheeraj Akolkar satisfies with the help of plentiful clips from Bergman’s filmography, disarmingly frank interviews with Ullmann, behind-the-scenes footage, and grainy images of and excerpts from letters and memoirs by Bergman. Ullmann was the unforgettable face and inspiration for Persona (1966) and other Bergman classics; he was her director, mentor, and teacher; and they were brought together by film and remained drawn to each other despite the scandal of their respective spouses. Their at-first-happy then increasingly jealously-filled and isolated life is translated into intensely personal, searing visions like Shame (1968), which sparks at least one close-to-the-bone anecdote from Ullmann. She shows Akolkar photos of a bundled-up Bergman in a boat beside a vessel carrying an underdressed, freezing Ullman and Max Von Sydow. “He was really angry that day,” she recounts. “You ask if he was ever cruel to me. This time, he was really cruel. I hated him so much and I was planning to leave him.” Some might criticize Akolkar for his loose hand with the couple’s story and his heavy reliance on invaluable Bergman works like 1973’s Scenes From a Marriage — no dates or clues to the films or productions used are given until the credits roll — but more irksome are the sentimental montages, “reenactments,” and score: one can picture Bergman convulsed in the beyond during the most saccharine moments. Liv and Ingmar’s strength is the woman at its center. Revealing mementos from her “dearest Pingmar,” as well as unguarded glimpses into her heart, the almost achingly sincere Ullmann gets the last word here, as befits a survivor and an actress who never hesitated to let the camera see every emotion flitting across her lush features — making this doc less about Ingmar and the specifics of his career, and more about Liv and her still living, breathing emotional life. (1:23) (Kimberly Chun)