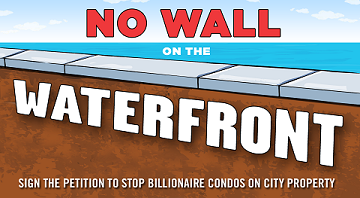 The campaign to subject big projects proposed for San Francisco’s waterfront to popular approval is officially underway, with the City Attorney’s Office today issuing the ballot title and summary for what is now officially known as the Voter Approval to Waterfront Development Height Increases initiative.

The effort, which grew out of the successful No Wall on the Waterfront campaign that stopped the 8 Washington luxury condo towers in November, must collect at least 9,702 signatures by Feb. 3. Those interested in signing or circulating petitions can start at noon this Saturday with a launch event at 15 Columbus Avenue, the same campaign headquarters as the fall campaign.

“The idea was to have a public process around what we’re going to do with the waterfront,” campaign consultant Jim Stearns told the Guardian.

The trio of high-profile projects that would be most directly affected by the initiative are the proposed Warriors Arena, hotel, and condos at Piers 30-32, a large housing and retail project proposed by the San Francisco Giants at Pier 48, and a sprawling office, residential, and retail project that Forest City wants to build at Pier 70.

For a complete rundown of those projects, this initiative, its chances of success, and its larger political implications, pick up a copy of next week’s Bay Guardian.