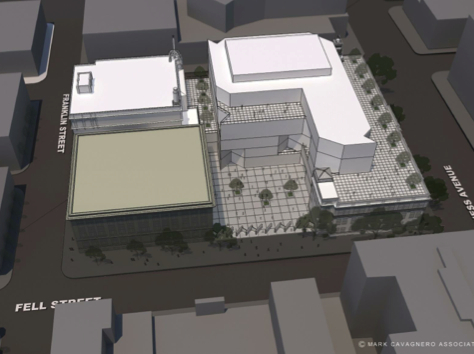 Art advocates have tried to move the Ruth Asawa School of the Arts high school to its new home on Van Ness street since 1987. Last night the dream moved one step closer, the only barrier is cost.

“There’s a big challenge going forward,” said David Goldin, chief facilities officer of the San Francisco Unified School District.  “I don’t want to minimize that challenge for one minute. But for the first time in a long time, we’re close to having an architectural reality.”

The school is named for one of its founders, artist Ruth Asawa, with deep roots in San Francisco history as an arts and education activist. It has a unique education model: students attend academic classes in the morning, but spend two hours every afternoon learning a specific art discipline.

SotA is currently housed at the old McAteer campus on Twin Peaks, with its sister school, the Academy of Arts and Sciences (disclosure: I taught students video editing at SotA as a contractor until last summer). Collectively they have 1,000 students enrolled.

The cost of moving the school to the site on Van Ness is steep for a number of reasons, SFUSD spokesperson Gentle Blythe told us. SotA’s new home was formerly the High School of Commerce, and was granted historic landmark status — meaning the facade, at the very least, must be preserved. The building needs a seismic retrofit as well.

A student, an SFUSD arts advocate, the school’s principal and Ruth Asawa’s son talk about the need for a new SotA site.

Most importantly, though, the cost is so high because the new site would be crafted with the arts in mind.

“It’s a high school for the performing arts with non-standard design considerations, including height of ceiling, and sophisticated electronics,” Blythe said. The building will be crafted for dance studios, orchestra rooms, multimedia facilities and more. It’s also not just a school: the district would also build an on-site auditorium that could seat 47,000 attendees.

For comparison, the new Willie Brown Middle School comes is budgeted at $55 million, Blythe told us. But the chief facilities officer said the price to move SotA was comparable to the cost of newer public arts schools in the US.

San Francisco artists came out in force to advocate for the move. First up to the podium to speak was the music director of the San Francisco Orchestra, Michael Tilson Thomas.

“I’m 10,000 percent behind this idea,” he told the board. “My dream is to do a Big Brothers Big Sisters program with all the grades, to share that vision with younger people.”

Conductor Michael Tilson Thomas to the SFUSD board of ed: “I’m 10,000% behind this” on new school of the arts bldg pic.twitter.com/HlNGsMvH6y

Outside the meeting he told the Guardian that he said it was a “strong possibility” there’d be a formal program for students to work directly with the orchestra were SotA to move to Civic Center.

Many more artists and politicians came up to the podium: from the San Francisco Opera, the San Francisco Ballet, an artist from the Mission, Susan Brown (Willie’s daughter), HOPE Director Bevan Dufty, former City Attorney Louise Renne, and Board of Supervisors President David Chiu.

“I’ve had some time the past couple minutes to reflect on my time in high school, given the amount of teachers and former mentors in this room,” said Alexander Jones, a class of 2011 graduate of SotA. “It was an experience that shaped who I am today, and shaped who I am in the world. I can’t wait for a future when SotA is a shining beacon of hope.”

He now studies dance at The Juilliard School, in New York.

Still, despite the love for SotA on display, $240 million is a steep bill. The school has $25 million total on hand for the project, Chief Facilities Officer David Goldin said. San Francisco voters approved a bond for $15 million to build the school in 2003, but it’s sat there unused ever since.

At the meeting, the commissioners answered a question staring everyone in the face: Why did moving the school take so long?

“The price tag was so high, and we got scared, and we put it in the drawer. It was in a time when money was scarce. It wasn’t the time,” Commissioner Hydra Mendoza McDonald said to the crowd.

The commissioners also said the remaining costs would likely not come from the school district.

“It’s probably going to take a ton of private money,” Commissioner Sandra Lee Fewer told the Guardian in a phone interview. “I don’t know what the fund raising plan is yet. I think we’re figuring that out now.”

The Board of Education will vote next Tuesday whether or not to build a new home for the Ruth Asawa School of the Arts.