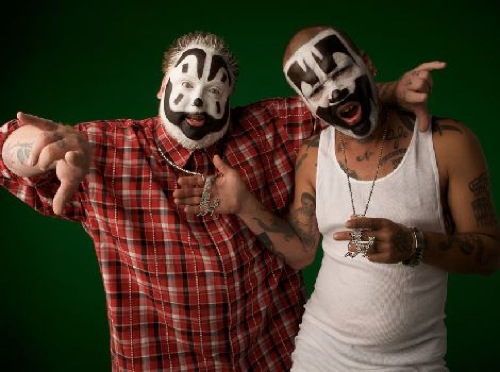 I never thought I’d write this sentence, and I doubt I’ll have cause to write it again, but: Good on ya, Insane Clown Posse.

The inimitable horrorcore-rap duo — best known for their demonic clown makeup, misogynistic lyrics, supposedly tongue-in-cheek love of extreme violence, and their always-charming fan base — filed a lawsuit this morning in Detroit against the FBI and the Justice Department, alleging that the federal government acted unlawfully when it classified Juggalos as gang members, leading to “harassment” of fans by law enforcement officials.

Attorneys from the ACLU of Michigan and attorneys for ICP collaborated on the suit, which concerns a 2011 report by the National Gang Intelligence Center on “emerging trends” that defined fans of the band as a “loosely-organized hybrid gang” that was “rapidly expanding into many US communities.” Four Juggalos listed as plaintiffs (alongside ICP members Joseph Bruce and Joseph Utsler — er, sorry, Violent J and Shaggy 2 Dope) claim the gang designation led to unwarranted harassment by the police.

“We’re not a gang, we’re a family,” said Utsler at a press conference announcing the suit. “We’re a diverse group of men and women, united by our love of music and nothing more. We’re not a threat, a public menace or a danger to society.”

Insane Clown Posse and their assorted devotees remain, of course, for many of us, a public menace to our senses and a danger to good taste everywhere. A gang? Not quite. And organized groups of assholes aren’t exactly an emerging trend.

Besides, don’t our federal security agencies have anything better to do?