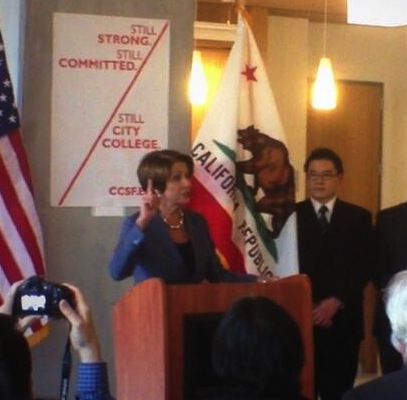 “You can be sure it will be subjected to harsh scrutiny in terms of how they do what they do, who they are and why is it the Department of Education cannot do more,” she said to the crowd of local luminaries and City College faculty.

City College of San Francisco is one of the state’s largest community colleges, home to a student body of over 85,000. The school came under fire from its accreditors, the Accrediting Commission for Community and Junior Colleges, last July, who moved to revoke the school’s accreditation. Such a move would force the college to close.

Since then the ACCJC has been beaten back from many directions: it’s tangled in three lawsuits, as well as a state inquiry from the Joint Legislative Audit Committee. Arguably the highest profile thrashing the agency received was from Congresspeople Anna Eshoo and Jackie Speier in November.

“I think the ACCJC has run amok, they have lost their vision — if they ever had one,” Speier told the Guardian. “They are riddled with conflicts of interest and arbitrariness.”

“I want to associate myself with remarks Congresswoman Jackie Speier and Anna Eshoo,” she told the crowd, to cheers.

Singing the praises of City College is all well and good, but the Guardian asked her directly: what can you do, and what is your next step?

Pelosi indicated that Congresspersons Speier, Eshoo, and George Miller, would review the role of the Department of Education regarding accreditors at a congressional higher education committee. This is something they’ve looked at before.

“We’ll see what is recommended when we go there,” she said. “Suffice to say this is not something that will be ignored.”