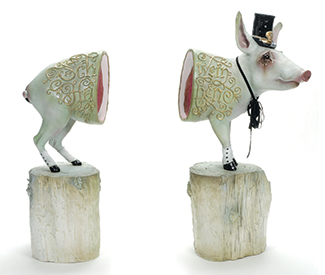 LIT On the cover of Incurable Disorder (Last Gasp, 2013), an adolescent deer covered in a thick pelt of diamond-bright Swarovski crystals gazes calmly outward, as ruby-red rhinestone blood drips from the points where golden arrows sprout cruelly from its graceful frame. Upon opening the book we see the piece — The Folly of St. Hubertus, 2010 — in its entirety. It’s a delicate, eight-legged anomaly, weeping, bleeding, and glittering all at the same time, housed within an austere glass-paneled case like a hunting trophy bagged in an enchanted forest, which many of Elizabeth McGrath’s strange creations resemble.

A bestiary of improbable wonders awaits within the pages of this confidently-designed coffee-table book: the mounted heads of tattooed rabbits and stags whose majestic horns are tangled with sails or telephone wires; bucktoothed rodents and circus bears with windows to alternate, dystopian landscapes planted in their chubby tummies; a cross-sectioned, gilt-edged pig with a pair of tiny, Victorian-style dollhouses firmly ensconced in its oozy-looking pink innards. Juxtaposition is the key word to many of these modernist mash-ups, and indeed, the LA-based “Bloodbath” McGrath is a favorite artist of famously outsider Juxtapoz magazine.

Inhabiting a territory too grisly to be labeled whimsical and too cartoonish to be labeled truly morbid, McGrath’s relentlessly askew dioramas and sculptures subvert the pop-goth ghetto of icky-cute by cutting just a little too close to the bone. Looking in the eyes of her mutilated menagerie inspires the same sense of fascination and bemused regret that accompanies the contemplation of roadkill or fetal pigs floating in formaldehyde. Her darkly incandescent aesthetic is reminiscent of Christiane Cegavske’s stop-motion tour de force Blood Tea and Red String (2006), wistful and powerful, playful and primal all at the same time

If twisting the familiar tropes of pop art appears to be a guiding principle behind McGrath’s dark menagerie, you can see the mechanics of a more classical approach in the equally haunting art of Laurie Lipton. Prosaically entitled The Drawings of Laurie Lipton (Last Gasp, 2013), the front piece of her book, a work entitled Round and Round (2012), demonstrates a folly of a non-sainted kind, a clutter of grinning skeletons driving in an endless circle around a lonely pair of old-fashioned gas pumps perched atop a wasteland of bones and pipes.

Lipton’s photorealistic, black-and-white line drawings bring to mind the highly-detailed engravings of Albrecht Dürer, an artist Lipton confesses an affinity for. But unlike Dürer, who favored woodcuts and watercolors, Lipton’s tools are charcoal and pencils, and her self-devised method of creating depth and texture with layer upon layer of incredibly fine lines and crosshatching gives her work a distinctive allure. Each white line is the result of the negative space being painstakingly filled in around each, rather than the judicious application of a white pencil (or, for that matter, an eraser), and this obsessive penchant for detail manifests itself further in the amount of same stuffed into each dystopian landscape: mountains of bones, webs spun from hundreds of threads, bushes covered in thousands of tiny leaves, each unique.

It’s precisely the intricacy of such details that makes Lipton’s work a challenge to fit into book format. The book itself is a handsome volume indeed, a compact 10 and a half inches by nine and a half inches, with a black, leather-look cover, and embossed silver lettering which subtly complements the many shades of gray employed by Lipton in her drawings. Many of the collected works are displayed with one page devoted to the full work, and another page with zoomed-in views of some of the most meticulous details. A drawing of a cobwebbed skeleton in royal court attire (Queen of Bones, 2009) gets a close-up of the knuckle bones that line her sumptuous brocade cloak, while The Three Fates (1997) gets one of a hundred tiny bodies crammed onto one small portion of an impossibly long conveyor belt passing in front of the gnarled figures of the titular Fates. But while these close-ups are helpful in decoding some of Lipton’s more ingenious inventions, the full impact of her larger works eludes the reader somewhat.

At a book signing at Varnish Gallery, one could get a slightly better idea of scale and composition via a slideshow, during which Lipton pointed out details we might have missed otherwise: flocked wallpaper decorated with hundreds of unsentimental clocks behind a baby carriage containing an elderly man in Second Childhood (1989); or a weathered, Maria Bello blonde peering frankly at her descending reflection in Mirror Mirror (2002) — the final figure of which is, Lipton assured us, an elderly woman, not quite visible in the book, but clearly delineated on the original.

Lipton herself is a gamine 50-something with a friendly, casual air. By her own account, she grew up in a supportive, suburban environment, but was drawn early to the shadowy themes and macabre images that typify her rigorous art. She described this apparent dissonance with the help of a visual aid: Pandora’s Box (2011), in which a delicate-looking porcelain doll clutches a wooden music box, from which a screaming horde of tortured and demonic faces issues, screaming, into the atmosphere. It’s unsubtle, perhaps, but artfully concise. For artists especially, external appearance means little. It’s what seethes inside that personifies them best.

“I can’t drive, I can’t cook, I can’t put up shelves,” Lipton confessed, flashing a disarmingly bright smile. “All I can do is draw.” That much, at least, is unambiguous. *