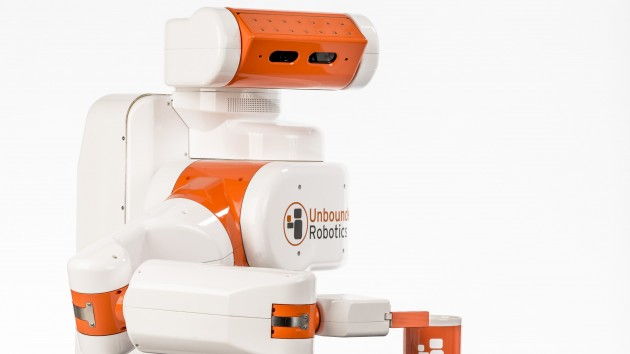 CAREERS AND ED “When it comes to robots, there’s usually a kneejerk reaction about job loss. But the robotics field is also creating jobs. We haven’t had stagecoach drivers for a hundred years, but still the world has moved forward.” That’s Tim Smith, a robotics public relations expert — talk about robots creating new jobs — speaking to me over the phone from his Element PR home office in Bernal Heights, where he’s busy representing some of the most innovative robotics projects coming out of the Bay Area.

Smith has a gentle way (he’s no robot?) of putting the recent quantum-like advances in the robotics field into perspective — while also noting the limitations of the field. “One of the biggest challenges I face is overcoming the ‘creep factor’ that most people have when it comes to robots. There are different kinds of robots, different niches: industrial, military, personal. Most people, however, jump to a kind of malevolent science fiction combination of all three. And that’s understandable, considering how robots have been presented in the past.

“But really, personal robots are all around us. Thermostats are robots. Smoke alarms are robots,” Smith continues. “And despite people’s misgivings, they really do want the future, they do want science fiction. They want Rosie the Robot to do their laundry, clean the house. But right now, most personal robots do one thing extremely well. It’s when they’re asked to do two things that chaos breaks out. They need controlled environments. For instance, we have robots to clean your floors, but not one to clean your floors and wash your windows. Even Google’s driverless car needs to be in a certain kind of environment to function.

“So that’s what’s really held the industry from advancing. Meanwhile, though, on this side of that wall, there are some spectacular things being done to fine-tune and develop not just robots but the robotics field, including efforts to integrate robotics into daily life. You can see how far intelligent technology has come just by looking in your pocket.”

Smith took me on a tour of some of the Bay Area-based organizations and companies pushing those advances, including direct descendents of Willow Garage, the legendary Menlo Park robotics incubator started by Google developer Scott Hassan in 2006.

Sure, math in high school was kind of a snoozefest. But what if your geometry class was taught by a box of robots? Yep, that might have you reaching for the protractor a bit more often.

RobotsLAB (www.robotslab.com) has created that box of robots, which is now in use in several schools. “The idea to create RobotsLAB BOX was born after spending hundreds of hours with educators, teachers, and administrators,” founder Elad Inbar told me by email. “The need for a population with basic STEM skills (science, technology, engineering, and mathematics) is imperative, yet we’ve heard over and over again that students don’t understand why they need to learn math, or where math’s core concepts such as linear and quadratic equations are applicable to their lives.

“As a result, they underperform in evaluations and can give up on meaningful careers. But the RobotsLAB BOX robots are serving in the classroom as a bridge between the concrete world we live in and and abstract math concepts.

“There are four robots in the RobotsLAB BOX: a quadcopter, a robotic arm, a rover with a mustache, and a robotic ball. The students love them all. They help teach everything from the law of cosines to the sum of vectors.”

RobotsLAB BOX even offers a STEM kit that guides you through the basics of robotics. Wait, does that mean a robot will actually teach you to build itself?

The Bay Area-based ROS (Robotics Operating System, www.ros.org) organization is a collection of programmers dedicated to advancing robotics development and application through collaborative coding and invention.

The Open Source Robotics Foundation (www.osrf.org) is the nonprofit in charge of overseeing the development of ROS. Basically this means that it helps make robotics coding something shareable and open to all who are interested (and who can gain the technical chops). OSRF also does things like participate in last year’s headline making DARPA Challenge, the awesome-looking, government-sponsored festival and competition aiming to push robotics to the next level, where it completed a challenge to build an open-source robot simulation environment.

“If you want to enter the world of robotics software coding,” advises Brian Gerkey, OSRF CEO, “some familiarity with Linux is helpful. But the best advice is to just dive in. There are tons of resources at ROS for all levels of expertise and a vibrant community ready to help.

“One of the challenges facing robotics is the multi-disciplinary nature of the field — hardware, software, vision, navigation, manipulation — and lots of math. But there are lots of ways for a young person to get started — things like the FIRST Robotics competition and the growing Maker community come to mind.”

To advance the cause of personal robotics containing open-source software, Gerkey is participating in a panel at the Commonwealth Club on Feb. 26 called “Robots in Unconventional Workplaces” (www.commonwealthclub.org).

“Everyone has their own idea of what a robot looks like and what it does, but in many cases those expectations derive from movies, books, and television shows. One of my goals is to help people picture robots in scenarios they never dreamed possible.”

“The simplest way to describe our UBR-1 robot is that it’s akin to an iPhone without any third party apps,” says Unbounded Robotics (www.unboundedrobotics.org) CEO Melonee Wise of the one-year-old company’s latest protoype.

“The robot, like the phone, is incredibly capable and sophisticated, but the real value comes from what developers are able to add to the platform. For that reason, the practical applications are limited only by the imagination of the ROS developer community.”

Another way to describe the UBR-1 is: squeee.

Now I just have to learn to program the darn thing.