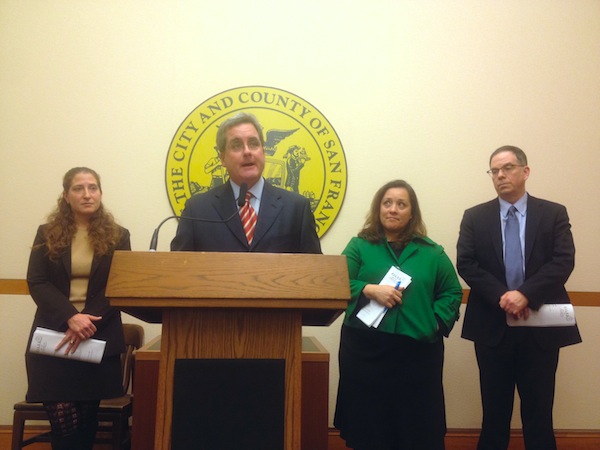 Update: This post has been updated with new information, after a 5:30 press conference held by City Attorney Dennis Herrera.

City College of San Francisco is safe from closure, for now.

A ruling from San Francisco Superior Court Judge Curtis Karnow issued this afternoon would bar City College’s accreditors from terminating the college’s accreditation until after legal proceedings against it are done.

The loss of accreditation would make City College’s future degrees basically worthless, resulting in its closure or merger with another district.

“I’m grateful to the court for acknowledging what so far accreditors have refused to, that educational access for tens of thousands of city college students matters,” City Attorney Dennis Herrera said at a press conference announcing the judge’s decision.

Now Herrera and his team have time to save the school, and City College will keep its doors open for the duration of the suit — win or lose.

The ruling was the result of an injunction filed by City Attorney Dennis Herrera on Nov. 25. as part of their suit against the Accrediting Commission for Community and Junior Colleges in August for allegedly using the process to carry out an ideological agenda against CCSF. The ACCJC openly lobbied in public hearings and via public letters for education reform across the state, reforms which City College’s administration believed would harm San Francisco’s most vulnerable students: the poor, certificate seekers, and lifelong learners.

Counsel for the Accrediting Commission for Community and Junior Colleges, Andrew Sclar and Philip Ward, confer during a break at a preliminary injunction hearing regarding City College of San Francisco on Dec. 26, 2013. Photo by Sara Bloomberg

Only part of the injunction was granted by Karnow, however. The ACCJC is barred from shutting down City College, but it can still revoke the accreditation from any of the 112 community colleges it oversees across the state.

The ruling also doesn’t stop it them from making preparations to close the college, Herrera said.

“It does not stop them from continuing their review and analysis and evaluation, it stops them from issuing a final ruling with respect to taking accreditation of City College,” he said.

Not everyone agrees with Herrera’s efforts though.

Harris argues that the lawsuit detracts from the efforts to save the school made by the special trustee Robert Agrella, who was assigned by Harris to replace City College’s board of trustees just after the accreditation crisis broke out.

“Characterizations that the cases before the court are a ‘last-ditch’ effort to ‘save’ City College are inaccurate and will do additional damage to the college’s enrollment,” Harris wrote.

And City College’s enrollment has taken a huge hit, down nearly 30 percent from last year, leading to the college’s new media campaign to get students back in City College seats.

Though Harris criticized Herrera’s lawsuit as the chancellor of the state community college system, Harris has tangled ties with the accreditors — he was a commissioner on the ACCJC board some years ago.

At the hearing to grant the injunction, Sara Eisenberg, the deputy city attorney, argued that real harm hit City College since the news of its closure hit. Students have left the school in droves.

“We’re asking, your honor, right now for something that won’t happen until further down the road… but there’s real harm happening right now. Latest numbers show enrollment is down 27 percent,” she told Karnow.

The ACCJC’s counsel, Andrew Sclar, argued that an injunction to stop City College’s closure would actually harm the ACCJC itself.

“There certainly would be harm to us,” he told Karnow. “If we do not enforce sanctions or bring a non compliant institution into compliance within a two year period, we would be at risk of losing our recognition with the United States Department of Education.”

Karnow then asked if there was “evidence on the record” of that ever happening. Sclar said no.

The college is slated to lose its accreditation in July 2014. The college is trying to reverse its fortunes and is applying for an appeal with the ACCJC.

Now, it has a chance to stay open while Herrera fights for its future. Two other lawsuits were filed against the ACCJC as well, one by the California Federation of Teachers and another by the Save CCSF Coalition.

Lawsuits aren’t the only fire the ACCJC has come under lately. US Rep. Jackie Speier called for a forum on the ACCJC’s alleged misconduct in November, and the beleagured commission was recently reviewed by the federal government, and given one year to come into compliance with federal guidelines.

For our coverage of the court hearing that led to the injunction, click here.

The full text of Herrera’s press release is below.

Herrera grateful to court ‘for acknowledging what accreditors callously won’t: that the educational aspirations of tens of thousands of City College students matter’

SAN FRANCISCO (Jan. 2, 2014) — A San Francisco Superior Court judge has granted a key aspect of a motion by City Attorney Dennis Herrera to preliminarily enjoin the Accrediting Commission for Community and Junior Colleges from terminating City College of San Francisco’s accreditation next July.  Under terms of the ruling Judge Curtis E.A. Karnow issued late this afternoon, the ACCJC is barred from finalizing its planned termination of City College’s accreditation during the course of the litigation, which alleges that the private accrediting body has allowed political bias, improper procedures, and conflicts of interest to unlawfully influence its evaluation of the state’s largest community college.  Judge Karnow denied Herrera’s request for additional injunctive relief to prevent the ACCJC from taking adverse accreditation actions against other educational institutions statewide until its evaluation policies comply with federal regulations.  A separate motion for a preliminary injunction by plaintiffs representing City College educators and students was denied.

In issuing the injunction, the court recognized that Herrera’s office is likely to prevail on the merits of his case when it proceeds to trial, and that the balance of harms favored the people Herrera represents as City Attorney.  On the question of relative harms, Judge Karnow’s ruling was emphatic in acknowledging the catastrophic effect disaccreditation would hold for City College students and the community at large, writing: “There is no question, however, of the harm that will be suffered if the Commission follows through and terminates accreditation as of July 2014.  Those consequences would be catastrophic.  Without accreditation the College would almost certainly close and about 80,000 students would either lose their educational opportunities or hope to transfer elsewhere; and for many of them, the transfer option is not realistic.  The impact on the teachers, faculty, and the City would be incalculable, in both senses of the term: The impact cannot be calculated, and it would be extreme.”

“I’m grateful to the court for acknowledging what accreditors have so far refused to: that the educational aspirations of tens of thousands of City College students matter,” said Herrera.  “Judge Karnow reached a wise and thorough decision that vindicates our contention that accreditors engaged in unfair and unlawful conduct.  Given the ACCJC’s dubious evaluation process, it makes no sense for us to race the clock to accommodate ACCJC’s equally dubious deadline to terminate City College’s accreditation.”

Judge Karnow adjudicated four separate pre-trial motions in today’s ruling following two days of hearings on Dec. 26 and 30.  Herrera filed his motion for preliminary injunction on Nov. 25 — three months after filing his initial lawsuit — blaming the ACCJC for procedural foot-dragging and delay tactics, which included a failed bid to remove the case to federal court and its months-long refusal to honor discovery requests.  Judge Karnow granted in part and denied in part Herrera’s motion, issuing an injunction that applies only to the ACCJC’s termination deadline for City College’s accreditation, and not statewide.

Apart from Herrera’s motion, AFT Local 2121 and the California Federation of Teachers also moved for a preliminary injunction on Nov. 25, citing additional legal theories.  That motion was denied.  A third motion by the ACCJC asked the court to abstain from hearing the City Attorney’s lawsuit for interfering with complex accrediting processes largely governed by federal law; or, failing that, to stay Herrera’s action pending the outcomes of City College’s accreditation proceeding and ACCJC’s own efforts to renew its recognition with the U.S. Department of Education.  A fourth motion, also by the ACCJC, requested that the court strike the AFT/CFT’s case under California’s Anti-SLAPP statute, which enables defendants to dismiss causes of actions that intend to chill the valid exercise of their First Amendment rights of free speech and petition.  (SLAPP is an acronym for “Strategic Lawsuits Against Public Participation.”)  Both of the ACCJC’s pre-trial motions were denied.

The ACCJC has come under increasing fire from state education advocates, a bipartisan coalition of state legislators and U.S. Rep. Jackie Speier for its controversial advocacy to dramatically restrict the mission of California’s community colleges by focusing on degree completion to the detriment of vocational, remedial and non-credit education.  The accrediting body’s political agenda — shared by conservative advocacy organizations, for-profit colleges and student lender interests — represents a significant departure from the abiding “open access” mission repeatedly affirmed by the California legislature and pursued by San Francisco’s Community College District since it was first established.

Herrera’s action, filed on Aug. 22, alleges that the commission acted to withdraw accreditation “in retaliation for City College having embraced and advocated a different vision for California’s community colleges than the ACCJC itself.”  The civil suit offers extensive evidence of ACCJC’s double standard in evaluating City College as compared to its treatment of six other similarly situated California colleges during the preceding five years.  Not one of those colleges saw its accreditation terminated.