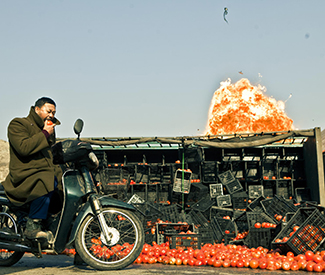 FILM Happy New Year, cinema fans: a pair of new films from highly acclaimed Chinese directors open this week, Chen Kaige’s Caught in the Web and Jia Zhangke’s A Touch of Sin. Both films are set in contemporary, conspicuously capitalist China, and concern ordinary people who are suddenly caught up in circumstances that are, for the most part, beyond their control. Their reactions are as extreme (violent, vindictive, irreversible) as they are revealing about the environments in which they take place, as limits are pushed, lives are ruined, and anger and despair erupt into brutal actions.

Though Chen — a Palme d’Or winner for 1993’s Farewell My Concubine — is a member of China’s aging “Fifth Generation” of filmmakers (Jia is, of course, one of the Sixth Generation’s top talents), his film addresses a youthful topic: the destructive power of the Internet. Executive secretary Ye Lanqiu (Gao Yuanyuan, star of 2009’s City of Life and Death) is a workaholic, with a posh yet empty life to show for it. An unexpectedly grim medical diagnosis shocks her into a kind of “fuck all y’all” fugue state, and when an old man boards her crowded bus, she flatly refuses to give up her seat. A heated argument follows.

Normally, an encounter like that — a familiar scenario to anyone who’s ever ridden public transit, particularly the 22 Fillmore — would pass unnoticed. But a cell phone camera clutched in the hands of nerdy-glasses-wearing wannabe journalist Yang Jiaqi (Wang Luodan) captures the whole thing; once ruthlessly ambitious producer Chen Ruoxi (Yao Chen) gets ahold of it, Ye Lanqiu’s rudeness goes viral, and a Reddit-esque smear campaign ensues. (This is in-joke casting, since actress Yao Chen is known as a social-media sensation in real life, with 52 million followers on the Chinese equivalent of Twitter.)

As the “Sunglasses Girl” video becomes a sensation, it affects all who are in its orbit, including Ye’s sleazy boss (Wang Xueqi) and his materialistic Real Housewife of a spouse (Chen Hong); Ruoxi’s boyfriend, photographer Yang Shoucheng (Mark Chao), who happens to be Jiaqi’s cousin; and, obviously, Ye, who goes into hiding before embarking on a Last Holiday-meets-The Bucket List spree. (Why do dying people in movies always want to skydive or bungee jump?) After two solid hours, every relationship in the film has been tested, if not ripped to shreds, and Caught in the Web has proven engaging enough to make the film’s biggest plot hole — why doesn’t Ye seize the power of the Internet to school all the haters on what motivated her behavior? — excusable. And despite the unavoidable fate of its main character, Caught in the Web ends on a note of hope, suggesting that there’s a reset button for almost everyone, even a Real Housewife.

A Touch of Sin, which is set in bleak factory towns and along dusty highways, in stark contrast to Caught in the Web‘s glossy cityscapes, offers no such redemption. Last year, it won Best Screenplay at Cannes and played multiple festivals; lately, it’s popped up on several prestigious “Best of 2013” lists (Sight & Sound ranked it number six; Cahiers du Cinéma ranked it fifth). If I’d gotten to see it before my deadline, it might have shaken up my own list. Jia (2004’s The World) is said to have based his screenplay on actual incidents, and also drew inspiration — as the title suggests — from King Hu’s martial arts epic A Touch of Zen (1971).

And despite some scattered Buddhist references, sin — delivered in heavy doses, hardly just “a touch” — reigns over Zen in the film’s four barely connected stories. Before the credits finish rolling, we’ve witnessed a stone-faced man in a Chicago Bulls beanie (Wang Baoqiang) respond to a trio of roadside muggers with a hail of bullets. Is he a vigilante, or did the robbers just mess with the wrong motorcyclist?

The film’s unpredictable tone well established, we continue to nearby “Black Gold Mountain,” site of a coal mine whose profits have been funneled into the pockets of its obscenely rich owner and the corrupt local village chief, who’s prone to put-downs like “You’ll be a loser all your life.” On the receiving end of that insult is worker Dahai (Jiang Wu of 2010’s Let the Bullets Fly), a human pressure cooker of rage and resentment. Mostly rage, though — and if the film begins to take shape as a rich vs. poor narrative, it all feels very realistic, despite the horrific violence that ensues. “My dear, wait and see. I can be evil,” Dahai assures the one person he shows any tenderness toward, a woman from his past who seems none too happy this disheveled, desperate man has paid her a visit.

More unwelcoming women appear in A Touch of Sin‘s next portion, which picks up the thread of the man in the Bulls hat. He’s a migrant worker, traveling home (an infrequent occurrence) for his mother’s birthday. She doesn’t say a word to him. His wife announces, “I don’t want your money,” but later softens, even as he plans his next journey in search of work. Fractured families are a recurring motif in A Touch of Sin — as are designer purses. The wife of Dahai’s boss passes by workers who’ve been bribed with bags of flour to come greet her, carrying her own status symbol: Chanel, natch. Later, the migrant worker takes his pistol out for a spin, ambushing a couple whose disposable wealth is telegraphed by the woman’s Louis Vuitton tote.

On his way out of town, he shares a bus with a man heading to meet his mistress (Zhao Tao, Jia’s wife and muse). It’s ultimatum time: get divorced or break up forever. As the man’s train rumbles away (A Touch of Sin‘s characters are constantly in transit, constantly in motion: trains, buses, motorcycles, riding in the backs of trucks, etc.), she travels to her job, working the front desk at “Nightcomer Sauna,” as unglamorous a joint as the name suggests. When a pair of wealthy customers decides she’s on the menu (“I’m a receptionist, not a masseuse!” she protests; “I’ll smother you with money, bitch!” is the response), she’s forced to defend herself — but not before taking a beating that echoes the whipping we saw a horse endure earlier in Dahai’s village. It’s made even crueler by its length, and the steadiness of its blows.

Animals — that horse, a tiger-patterned scarf, the bull on the migrant’s hat, a fortuneteller’s snakes — filter through each segment, though the most prominent creatures in A Touch of Sin don’t appear on the Chinese zodiac chart. That’d be the bag of goldfish released in a “do good deeds and be rewarded in the next life” ploy by a pretty girl (Vivien Li) befriended by Xiao Hui (Luo Lanshan) in the film’s final chapter. He’s a waiter with money woes, and she’s a prostitute. They click, but “There’s no true love in sex work,” she declares, with the sad conviction of one who knows. Later, when the lad shifts to factory work, it’s clear no amount of freed fish can make this life any less poor. That his company housing is dubbed the “Oasis of Prosperity” would be funny, if it wasn’t so depressing.

In A Touch of Sin‘s final scene, the film’s one potentially salvageable character passes by an opera being performed in the street. “Do you understand your sin?” the singer warbles. The character pauses, remembering what happened — and why it had to happen. So do we. And yes, we understand. *

CAUGHT IN THE WEB and A TOUCH OF SIN open Fri/3 in Bay Area theaters.