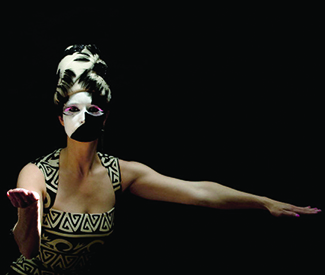 TOFU AND WHISKEY If you’re like me, you’d much rather chug the Champagne of Beers straight from the can in flower-print stretch pants while loud music ricochets through your skull than hit a club club on New Year’s Eve. You’re down to party, but you want to keep it cheap, right? Or at least keep it weird.

Clearly, the cheapest way to do NYE is to hit a house party or an underground show. And obviously, I’m not here to rep those secret gems, because, you know, cops and party poopers. Go out and find those on your own, check Facebook feeds and emoji-filled text message chains and keep pestering your most social friends.

But there’s another option: that awesome live show or local bar party that, while not so underground, is still not a $150 nightmare of sputtering randos in a warehouse. These are some quality events at which to gather your favorites and ring-a-ding-ding in 2014. (All take place Tue/31.) Find more NYE dance parties here and fun general events here.

BLOND:ISH
“Hello Earthlings. We are just landed.” If you really want to get down on NYE, London-via-Montreal duo Blond:ish can help put you in the mood. It’s all pulsing bass lines and feather-thin synths leaping along, like a beautiful insect just pushing forward, following the path it’s been given and dispensing drips and drops along the way, all to the all-important beat. Blond:ish comes as part of the Mighty Mammoth Masquerade, which also includes (whoa) visuals, a photo booth, free food bites, and the very-important midnight Champagne toast. With Pink Mammoth resident DJs Gravity, Moe Moe, Jonathan Will, and more. 9pm, $40. Mighty, 119 Utah, SF. www.mighty119.com

DANNY BROWN
Weirdo rap forever, am I right? There’s little more invigorating than a Danny Brown cut. The Detroit rapper’s flows feel like warped tickles, his rhymes tight and clever, and his beats fresh and trippy. He’s ridden the hype train for the past few years, and in 2013 played Coachella, toured with Baauer and Kitty (Pryde), and released Old (Fools Gold), the successor to 2011’s excellent XXX and 2010 breakout The Hybrid. His live shows are playful and animated, that adorable gap-toothed grin shining like a bolt of light from the stage, quickly hidden and then flashed again while its owner leaps and bounces along the front, spitting words and revving up the already-freaking crowd. With Flatbush Zombies and Traxamillion. 9pm, $45. Mezzanine, 444 Jessie, SF. www.mezzaninesf.com

CALEXICO
Born on the border of the US and Mexico, Calexico has long been indie rock’s dusty, crunchy sidekick, blending elements of Americana with Latin American style and instruments. As is breathlessly reported in every mention of 2012’s Algiers, the Tucson duo’s most recent full-length was raised in New Orleans, far from the band’s origins. But despite the total scene change, the album stays true to Calexico’s comforting songwriting prowess and light instrumental flourishes, like a pair of dirty, perfect-fitting boot cut jeans. Also keeping with Calexico tradition, the album maintains political undercurrents, named after a Louisiana neighborhood that was deeply affected by Hurricane Katrina. But beyond Algiers, Calexico has a stable of lovely albums, notably 2006’s Garden Ruin and 2008’s Carried to Dust. If you want to make like John Wayne, or even Troy Dyer, consider pulling up a stool to Calexico at the Fillmore. 9pm, $65. Fillmore, 1805 Geary, SF. www.thefillmore.com

EL ELLE AND GOLD CHAINS
Things will likely get sexy at this show: Provocative solo artist El Elle, aka Lisa Light of cultish favorites Lovemakers (who now splits her time between LA and SF), is a showstopper. She blends mod style and sonic substance, analog synth with bass and whispery, dreamy vocals, Beyoncé-slick moves — and butts, in her video for “Heartbeat” — and Kate Bush organic songwriting. Or at she puts it, “experimental pop/New Age dance party.” Plus, naughty, heart-pumping local club music producer Gold Chains will join her — um, he has a 2013 album called Sluts (Gold Club) — as will Everyone is Dirty, and super secret special guest DJs. As is tradition on this night, there’ll be a Champagne toast at midnight. 9pm, $10. Night Light, 311 Broadway, Oakl. www.thenightlightoakland.com

FRESH & ONLYS
This is San Francisco, and in San Francisco, we call the Fresh & Onlys home. The quartet — led by enigmatic front person Tim Cohen — formed here, lives scattered across the city, works at Amoeba and beyond, and records its demos at the top of battered old Victorians. It lives and breaths a certain breed of SF, which unfortunately seems to be dimming; it’s a last vestige of a scrappier DIY time. (Case in point: after this issue went to bed I got the news that SF music scene fixture John Dwyer is heading to LA. And actually, Cohen has already flown the coop, for Sedona, Ariz.) So yes, we’ll ring in the New Year at our newest music venue, but with our beloved rock’n’roll troubadours on hand to close out the year, with the opening shimmer of Vetiver, Sun Araw, and Pure Bliss. How does that sound, San Francisco? Yes, it’s been a Long Slow Dance, to borrow the Fresh & Onlys 2012 album title. And it sounds pretty damn good. 9pm, $25–$30. Chapel, 777 Valencia, SF. www.thechapelsf.com

GLITTER WIZARD
Sometimes you need some glammy theater in your scummy psych metal: Enter Glitter Wizard. The band is building its own legend, of flowing long hairs and swinging hips, and the combo is just right for a debaucheries NYE. The rounded out Hemlock Tavern lineup is great too — Alternative Tentacles act Pins of Light and Ovvl, the latter a band of local brothers (plus a sister-in-music bassist) just back from a ripping six-week tour of Europe. 9pm, $15. Hemlock Tavern, 1131 Polk, SF. www.hemlocktavern.com

MELVINS AND REDD KROSS
Is there anything more classic than the Melvins? They’re doomy, punk-metal, rock’n’roll touring machines, playing up and down the coast all year long, repeatedly blowing minds while keeping their cool. They’ve been playing since 1983, and fro-y front person Buzz (Roger Osborne) has maintained throughout, leading the wild pack through various lineup changes (even now they sometimes play as a trio or five-piece) and more than 20 records. In 2013 alone the group released two full-lengths: Everybody Loves Sausages and Tres Cabrones (both on Ipecac Recordings). Everybody Loves Sausages is a blistering cover album of very loudly reimagined tracks like the Jam’s “Art School,” Lead Belly’s “Black Betty,” and an inspired take on Venom’s “Warhead.” Oh, and this time they’re playing with a legendary late-’70s punk band called Redd Kross — yes, that Redd Kross, the bratty Hawthorne, Calif.-bred brothers who fed power pop through a meat grinder and pumped out records like B-movie-aping Teen Babes From Monsanto (1984) and heavy Neurotica (1987). It’s safe to assume your face will be melted off by early 2014. With Frightwig. 9pm, $40. Great American Music Hall, 859 O’Farrell, SF. www.slimspresents.com

REMONES (RAMONES TRIBUTE)
Holidays bring out the best tribute shows. And who doesn’t wanna hear all the Ramones hits of yore played by a live band in a beachy dive bar? As that meme’d pie chart side-by-side of the things the Ramones want versus things the Misfits want, the Ramones were the biggest fist-pumpers. Ramones wanna 1. “Sniff Some Glue,” 2. “Be Sedated,” and 3. “Be Your Boyfriend” (the joke is that the Misfits only want “Your skulls”). All that punked-up energy makes for some killer classic possibilities. And since most of the Ramones are now dead and gone — RIP — your best bet for getting what you wanna get is the Remones, SF’s party Ramones act since 2009. And don’t worry, it’s not just the sound; the band dresses the part in tight jeans, shaggy hair, and leather jackets. This is a free-for-all, no-cost Outer Sunset retreat back to the late ’70s before we fast-forward to the future now. 9pm, free. Riptide, 3639 Taraval, SF. www.theriptidesf.com