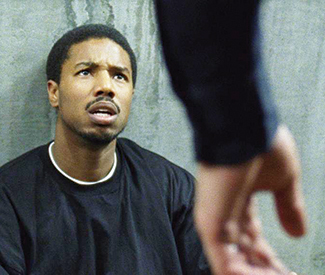 YEAR IN FILM It’s tough to remember much of the ’90s — what with the air horns and kindercore, flannel and Flavor Flav — but I seem to recall Spike Lee giving the orders that seemed to finally, fully come to pass in 2013: “Make black film.”

Irony of ironies, when it seemed like so many black filmmakers were following through and doing just that — telling their communities’ stories, visualizing their own histories, and fearlessly unlocking troubling and painful key themes — Lee sidled away from Red Hook Summer, last year’s murky return to the fabled Brooklyn stomping grounds of 1989’s Do the Right Thing, and seemed to move toward a fallback position as actioner-for-hire with his redo of Park Chan-wook’s Oldboy, as if to prove that, testify, he can crush skulls just like his old Amerindie-boys-club rival Quentin Tarantino.

Yet isn’t Lee’s Oldboy a “black film” concerning unjust incarceration or bondage, as much as Steve McQueen’s 12 Years a Slave and Hunger are? Perhaps. The connections were in place, if you cared to look: the stasis of 12 Year‘s near-still opening shot, as Solomon Northup (Chiwetel Ejiofor) and other slaves facing the audience, waiting and listening to a white foreman’s directions, has its corollary in the multiple shots in Lee Daniels’ The Butler, of Forest Whitaker’s butler Cecil Gaines, face frozen. He’s the veritable “invisible man,” instructed to disappear into the background at White House dinners and forever listening for direction. And waiting — as if wondering when the moviemaking establishment will move on from its habit of bestowing statuettes for African American portraits in servitude, à la The Help (2011) and Driving Miss Daisy (1989).

It’s been a long time coming — much like a certain African American president that butler Gaines had waited a lifetime to meet. Five years into that presidency, the man who tried to “do the right thing” has, intentionally or not, changed the conversation on black representation on screens both big and small. The country’s ready to look at its past and break down the codes, whether they concern slavery, birthers’ loaded allegations about Obama’s “un-American-ness,” Paula Deen’s alleged workplace racism, or Julianne Hough’s wrongheaded Halloween costume — a blackface tribute to “Orange is the New Black” character Crazy Eyes.

This year’s contenders looked to not only historical role models like Jackie Robinson in 42 and Nelson Mandela in Mandela: A Long Walk to Freedom) — in movies made by white filmmakers — but also lighter, aspirational figures such as Tyler Perry (who laid siege on the box office with two efforts, A Madea Christmas and Peeples), as well as the glossy buppies populating popular comedy sequel The Best Man Holiday. Fans blew up the Interwebs with indignation when some misbegotten USA Today editor came up with the headline “Holiday Nearly Beats Thor as Race-Themed Films Soar.”

The Best Man Holiday is bourgie worlds away from Spike Lee favorite Fruitvale Station. (One wonders if the acclaimed indie will serve as a model for Lee’s own Kickstarter-fueled Trayvon Martin project.) Filling out the many shades of his protagonist’s story, and leading with cell phone footage of the fatal shooting, director Ryan Coogler never overplays the naturalistic narrative centered on Oscar Grant, so often writ larger than life all over Oakland in posters and street art. Though it was released at height of Martin-related outrage, the film keeps sensation and sentimentality at bay, apart from a foreboding scene of a stray dog’s sudden death. Like that hound on the run, Michael B. Jordan’s Grant is a driving, hustling, partying study in movement. Fully immersed in a multicultural Bay Area where racism operates in subtler and more complex ways than ever before, he, like any other restless rider, is just trying to get home.

Whitaker threw his weight behind Fruitvale Station as a producer — but his Gaines and The Butler seem wildly different on their stiff, sad surfaces. So much is simmering within Whitaker’s stocky form, his steadfast servant with access to power that he’s forbidden to use, and those blank looks. “We got two faces: ours and the ones that we got to show the white folks. Now to get up in the world, we have to make them feel non-threatened,” mentor Maynard (Clarence Williams III of The Mod Squad) offers. Surrounded by Daniels players like Mariah Carey and Lenny Kravitz, Gaines has one leg in a horrifying sharecropper past and another in upwardly mobile mid-century America, which filmmaker Daniels emphasizes by juxtaposing lynched black men with the stars and stripes at The Butler’s start.

The director goes on to unfurl his showiest stylistic flourishes in a series of jump cuts aimed at the spectacle of hypocrisy perpetually unfolding in the White House, as a table is carefully laid for a excruciating formal state dinner, and the Freedom Riders — Gaines’ son among them — are humiliated while staging a stoic sit-in at a Southern lunch counter. Passive resistance, in all its many forms, is the locus of both tragedy and heroism in The Butler.

Nature, with its dripping moss, strange sunsets, and even Biblical pestilence, provides brief snatches of beauty in 12 Years a Slave, as McQueen foregrounds the mechanistic business of slavery in the tools used for cutting cane, the wheels of a river boat. Free-born violinist Northup is beaten into a kind of tool after he’s kidnapped and sold into slavery. His body, nude and exposed to traffickers and buyers, is transformed into a commodity that doesn’t belong to him. His talents are also forced into new uses, as when he fiddles frantically while a mother is torn from her children in a horror-show of a salesroom floor — and later, during a torturous, late-night dance staged by Michael Fassbender’s damaged, sadistic slave owner. The effect of seeing familiar white actors (like Fassbender, and the stars who play The Butler’s various commanders in chief) reel by in a parade of status quo perpetrators, not saviors. In both 12 Years and The Butler, it’s disorienting — as if everyone in Hollywood is also aching to “make black film.”

Lupita Nyong’o in 12 Years a Slave

Bridging McQueen’s explorations of physical and psychological abjection, Hans Zimmer’s slow-burning, string-laden score picks up where it left off in McQueen’s 2011 Shame, about Fassbender’s sex addict enchained to his confused desires. In terms of desire, it’s all too clear where Ejiofor’s Northup stands (“I don’t want to survive — I want to live!” he declares), and to his credit, McQueen makes his nightmarish 172-year-old descent all too relevant, especially at a time when the Obama administration addresses the persistent crime of human trafficking. It’s just a small leap of imagination to think of one’s story, name, and legal status blotted out and turned around by force and a gnawing “you’re nothing but a Georgia runaway” counter-narrative, reminding the viewer that no one is truly free when others are enslaved. *

Best flouting of the laws of physics: Gravity (Alfonso Cuarón, US)

Best use of entire songs: Inside Llewyn Davis (Ethan and Joel Coen, US/France)

Inspired grills and thrills: Spring Breakers (Harmony Korine, US) Rapturous apocalypse: This Is the End (Evan Goldberg and Seth Rogen, US)