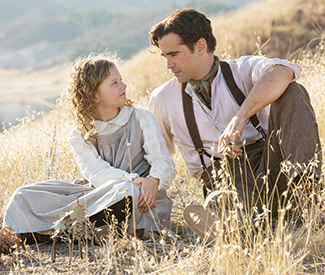 YEAR IN FILM When Labor Day‘s sexpot convict Josh Brolin holds Kate Winslet and her son hostage in their home, you know he’s dangerous even though he’s not exactly threatening. He starts cooking and fixing stuff around the house, and quickly slips into the role of surrogate father-husband. He’s not just doing it because Winslet’s hot divorcee could use company or her son could use a manly example, he’s filling a void left by an inferior dad whose apology for leaving began, “If I were a better man…” (Labor Day opens in SF next month.)

From fallen fathers to dishonest daddies, 2013’s movies featured a lot of bad providers. Some were crooks, others were benign fuckups, and their stories didn’t necessarily end with redemption or comeuppance. What’s more, most of the men stumbled into fatherhood — and none more clumsily than Delivery Man‘s David, played with surprising pathos by Vince Vaughn.

David’s just gotten excited about his girlfriend’s pregnancy when he learns that his years-ago decision to bank enough sperm to finance a European vacation has resulted in 533 “surprises.” (Director Ken Scott helmed both Delivery Man and its Canadian inspiration, Starbuck.) Oh, and a group of his offspring have filed a class-action lawsuit, intent on discovering who their father is. Granted, it seems unfair to judge him as a parent. He’s blindsided by the existence of his adult kids — and his reaction is to do the embarrassing, heartwarming shit dads do to get to know their teenagers. He may be dumb enough to pile up mob debt, but he’s sticking his neck out as far as it’ll go for relative strangers. (Now that’s the kind of setup — speaking of Brolin flicks — that could almost make Oldboy plausible.)

And then there’s Irving Rosenfeld, Christian Bale’s upwardly mobile con artist in American Hustle. Irv cheats on his wife, but he’s loyal as hell to his stepson, and he stays on the take to provide for the little guy. The Wolf of Wall Street‘s manic maniac Jordan Belfort (Leonardo DiCaprio) swindles the one percent purely to satisfy his own ego. The obscenely rich Quaalude addict could easily buy an island for the world’s orphans. He hires hookers instead.

Wolf is full of drug-fueled sequences that are played for laughs, until the ugliest, most over-the-top scene, which transpires in front of Jordan’s toddler daughter. Finally, the line is crossed. Long having left that line in the dust, along with his dignity, is Kyle Chandler’s weary dad in The Spectacular Now — an alcoholic whose wasted life serves as a warning to his teenage son, whose own boozy habits suggest history is about to repeat itself.

If all you had to go on was 2013’s movies, you could believe someone had to grift, jerk off, and/or do time to be a man. Even foreign releases featured patriarchs with bad judgment. Asghar Farhadi’s The Past begins as Iranian Ahmad (Ali Mossafa) travels to France to finalize his divorce to anxious Marie (Bérénice Bejo); before long, he’s playing traffic cop and detective in a morass that involves Marie’s new boyfriend (Tahar Rahim) and an array of children (none of whom are Ahmad’s). What some people call help, others call “codependence.”

At least Ahmad’s no Charles Dickens. Betcha didn’t know the man behind Tiny Tim talked a lady into making her daughter his concubine, as depicted in The Invisible Woman (also out next month). Worse, Mom (Kristin Scott Thomas) approves because she knows the pretty lass (Felicity Jones) will never receive a better offer. Ralph Fiennes, who also directs, plays Dickens like a daddy with deep pockets and deeper emotional issues. We know he can always pay the girl’s expenses and return to his baby-wrecked wife — but by all means, let’s celebrate the great writer! While I’m on the tangent of fleeing fathers: someone needs to tell Inside Llewyn Davis‘ title character about condoms. (Preferably not Anchorman 2‘s Brian Fantana, however.)

But the honorary Oscar for Best Portrayal of a Wayward Provider goes to Colin Farrell. It’s mesmerizing how the man can be so lovable and yet so simultaneously disappointing. In Saving Mr. Banks, he’s Travers Goff, a banker who nips bourbon in the office and tells the most drunk-mazing stories. The world he gives his children, including Mary Poppins author P.L. Travers, is filled with wonders; the one he forces his wife to occupy is oppressive and darkly real. When he develops consumption (less insulting than the clap but still bad), an imposing agony aunt (Rachel Griffiths) comes to rescue the family, and a legend is born.

When she’s wooed by Walt Disney (Tom Hanks), who’s intent on bringing the Banks family to the big screen, prim Mrs. Travers (Emma Thompson) resists. She’s protective of Mr. Banks, the father in Mary Poppins — a character she created as an act of catharsis. Meanwhile, Disney assumes the role of patriarch to America’s children for his own bleak-childhood reasons. Banks may be one of the few films about daddy issues that doesn’t look like Girls Gone Wild.

Making a living can be hard and taking care of loved ones can be messy. Enter Spike Jonze’s Her, a movie about the ultimate no-fuss girlfriend: a witty, adoring computer operating system blessed with the voice of Scarlett Johansson. Her is the biggest campaign against childbearing since 1997’s Gattaca. We all have issues with our parents — but between 533 happy endings and the positioning of an escaped convict as the ideal man, we should caution against looking for answers in the movies. If you get confused, ask your father. *