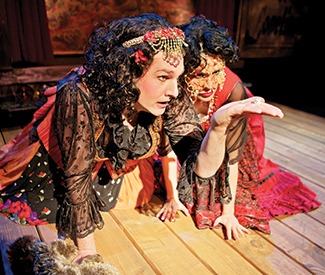 THEATER Take away their unconventional looks and odd talents, and the eponymous carnival performers of Freaks — Tod Browning’s classic carnie horror movie — were not so unusual. Ordinary folks, for the most part, with ordinary problems and everyday virtues. The title secretly pointed to the monstrous souls of their “normal-looking” but heartless colleagues, corrupt to the point of betrayal and murder.

A similar logic is at work in British playwright Anthony Neilson’s droll sideshow, Edward Gant’s Amazing Feats of Loneliness — now enjoying a first-rate Bay Area premiere courtesy of Berkeley’s Shotgun Players — if only in the sense that here too looks can and do deceive; that the truth can prove an elusive, and illusive, thing.

Very funny and beautifully staged with a whimsical, vaguely mysterious mien by director Beth Wilmurt, Edward Gant trades on the gap between our expectations of real life and the fantasies plied by artist-tradesmen like the title character. He’s a strange showman in top hat and tails (played with a nice balance of the corporeal and ethereal by a vacant-eyed Brian Herndon) who heads up a traveling band of scrappy Victorian-era players: innocent Jack Dearlove (Ryan Drummond), restive Nicholas Ludd (Patrick Kelly Jones), and ennui-laden Madame Poulet (Sarah Moser, rounding out an exceptional ensemble).

The farfetched universe these working-class actors conjure from the back of their roving circus truck (in scenic designer Nina Ball’s handsomely evocative construction) might seem like the most preposterous fluff. Gant is worldly enough, however, to know “the truth of life lies least in the facts.” It’s the illusions that count. And in the hands of these showmen they are ribald, wacky, sometimes gruesome stuff.

Hence we come to take seriously, at least a little seriously, the story of a miserable young woman (Moser, done up in a gorgeously macabre, beaded beard) whose massive pimples divulge pearls. These end up appropriated by her evil, good-looking sister (Kelly Jones in a rich “Italian” accent and one of costume designer Christine Crook’s wonderful period getups). And although they also win her a husband (a diabolically dashing Drummond), he turns out to be wayward (not surprising in itself until you see whom he runs off with).

We also get treated to the sad yet hysterical tale of a bereaved fellow (Drummond) who travels to the peaks of Nepal in search of relief from the memory of his deceased fiancée — but the guru (Kelly Jones) he locates to do the job makes something of a botch of it.

These two stories comprising this sleek, uninterrupted 100-minute production come bridged by two songs, arranged in four-part harmony, and include unexpected encounters and asides with soiled teddy bears and other wildlife of the imagination. The “real” story, meanwhile, unfolds among the band of players, as the tensions and frustrations of their life on the road take their toll, leading to discord, dissension, and revelation.

Although a gentler offering than much in playwright Neilson’s generally disquieting oeuvre, Edward Gant continues a line of attack by the dramatist (and often director) on the complacencies of traditional stage realism and their corollaries in everyday life. (The titles of two of his plays, 2006’s Realism and 2013’s Narrative, highlight the terrain pretty neatly.)

Edward Gant also marks the impressive directorial debut of Shotgun company member and well-known Bay Area actor Wilmurt (co-creator, with Mark Jackson, and co-star of 2011’s memorable The Companion Piece at Z Space; and last seen at Shotgun in Jackson’s production of Woyzeck). The director title may be new, but for those familiar with Wilmurt’s admirable comedic and musical abilities — the way she melds influences from vaudeville to Viewpoints into an understated, balletic form of physical humor and wry between-the-lines commentary — her stamp is all over the strong ensemble playing and choice details of this pearl of a production. *