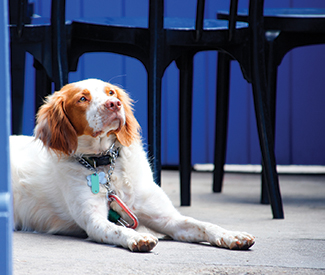 It used to be rare to see dogs in restaurants — which many people see as gross and the health codes don’t allow — but not anymore. It’s an increasingly common sight to see dogs in Bay Area restaurants, grocery stores, bars, and others businesses that traditionally haven’t allowed them.

Call it part of our love affair with canines, a loophole in medical privacy laws that stymies inquiries into whether Fido is a service dog needed for some ailment, or a manifestation of some people’s entitlement issues, but more and more pet owners see no problem with bringing their dogs to the dinner or lunch table.

Some have even angrily defended their supposed right to do so when confronted.

The city estimates there are about 120,000 dogs living in San Francisco, which equates to almost one dog per seven people. Sometimes it seems like even more than that given how omnipresent dogs seem to be, popping in places that used to be off-limits to them, such as restaurants.

Some people now see restaurants as dog-friendly zones, but they’re not, and for good reason. Due to public health concerns, dogs are banned by federal law from any establishment that serves or handles food.

The lone caveat to that rule is provided by the Americans with Disabilities Act (ADA), and it allows those who need service dogs to have them at all times, overriding the aforementioned policy established by the US Food and Drug Administration. The existence of the caveat isn’t really a problem — service dogs are necessary, helpful, and are highly trained animals — but the loophole it provides is.

“Under those provisions, restaurants are somewhat limited in that they can’t be too forceful in their line of questioning,” said Angelica Pappas, communications manager at the California Restaurants Association (CRA). “So I think that some people who want to bring their dogs know that and might think that they can get around the law that way.”

And in San Francisco, the trend is particularly pronounced, creating a problem for those who work in restaurants.

“The most obvious issue you see [when a dog is in a restaurant] is cross contamination,” said Terrence Hong, senior environmental inspector with the San Francisco Department of Public Health. “A food handler might pet a cute dog, for instance, where service dog handlers go through training themselves and are more prepared for that situation.”

Food can be contaminated with fecal bacteria — something many dogs just love to roll around in — in addition to just the unsightly hairs ending up in people’s meals. The US Centers for Disease Control estimates that one in six people (about 48 million) are sickened by food-borne illness each year. Of those, 128,000 are hospitalized and 3,000 die, according to the CDC’s last comprehensive study of the issue in 2011.

“Safety, too, is an issue,” Pappas said. “There’s no guarantee that all these dogs are well-trained and even having them on a patio is really no different than having them inside when it comes to that.”

Florida became the first state to allow non-service dogs in outdoors seating areas in restaurants in 2006, and California had followed the lead of the Sunshine State by 2012.

“But the application of those laws is far more difficult than the black and white on a piece of paper,” Hong says.

The ADA — the same law that allows service dogs to enter restaurants— is proving to be one of the biggest obstacles when it comes to identifying the fakes. The language in the ADA states that anyone entering a business with a dog claiming to be a service animal can be asked only two questions: Is the dog a service dog? What task is it trained to do for you?

Business owners can’t ask a person in question for identification, because no federally or municipally approved uniform identifier exists, according to Hong. They can’t ask what a customer’s ailment is, because that question violates a privacy clause in the ADA.

While the restaurants are being unlawfully infiltrated, other areas around the city are experiencing atypical levels of canine traffic as well.

Buses? Sure, why not. As long as your dog has a muzzle, it can legally take part in the herkiest, jerkiest, most claustrophobic ride available in the Muni playground, at least according to the unbothered gentleman with his dog on the 47-Van Ness bus on a recent Saturday.

Cabs? Hop on in, Rover. The mall? Every dog could use an afternoon at Michael Kors. Grocery stores? Screw the food handling laws, dogs gotta eat too.

And if someone gets in the way of you and your pet canine’s umbilical relationship? Just claim it’s a service dog. Sure, it’s considered a federal offense to misrepresent your pet as a service animal, but you can order a super-official looking vest off the Internet easier than you can order a book off of Amazon. The malfeasance is also nearly impossible to report.

Thus, the misrepresentation of service dogs is a rapidly growing problem, and one that seems to be trivialized by a large number of people.

Unfortunately for those who need legitimate service dogs, Hong said the general public has offered little opposition to the fakes. He said that there is no exact figure for dog-related complaints, because they don’t consolidate them, but he also noted that many people are reluctant to speak out against the malfeasant service dog owners.

Whether it’s because they think the business owners will handle the complaint (they won’t, according to the CRA) or if they are just privately, rather than publicly, opposed to the trend (which Hong had said he thinks people are), it still leaves the owners of real service dogs in a tough place.

Brozman says that she has been denied service at those institutions expressly because of the bad name that poorly trained service dogs have given to the whole industry.

But Brozman needs her dog. She uses a manual wheelchair full-time due to a condition called dystonia, a neurological movement disorder that causes extremely painful and involuntary muscle contractions. Even with her condition, she says that she has been made to pay pet deposits in hotels, even though her dog isn’t even classified as a “pet” by the ADA.

And Caspin, Brozman’s dog, is definitely not a pet. He understands both Sign Language and English, making him a bilingual dog (and more linguistically savvy than this writer). He’s been trained to stay calm in loud, obnoxious public settings. He can pick up anything Brozman might drop. He’s a talented dog, but he’s no pet.

According to the California Penal Code Section 365.5, a “service dog means any dog individually trained to do work or perform tasks for the benefit of an individual with a disability, including, but not limited to, minimal protection work, rescue work, pulling a wheelchair, or fetching dropped items.”

Service dogs not only provide assistance when necessary, but they provide their handlers with a sense of autonomy that they can’t achieve through other means. That’s why service dogs were included in ADA of 1990.

It was a huge victory for the people that really need service dogs, like Brozman, for instance, or war veterans suffering from post-traumatic stress syndrome. One of the prescribed treatments for PTSD victims happens to be the presence of a service dog.

“It can cost us $5,000 to train these dogs for veterans,” said Robert Misseri, president of a service dog training organization called Guardians of Rescue. “Poorly behaved dogs make things more difficult for the vets who need our dogs.”

But the benefits of owning a service dog can be voided in a hurry if the dog encounters another dog without the same composure, training, and restraint.

“Our graduates have been bitten by dogs in public, provoked, and mistreated by other dogs,” said Angie Schact, an instructor at Canine Companions for Independence, a program that requires a minimum six-month program for their graduates. “They have gone through so much more training than the average dog. We’ve raised the issue with the Department of Justice. We’re serious.”

But when the ADA was originally drafted, according to Paul Bowskill, general manager of ServiceDogsAmerica.com, it “provided for very few mental disabilities. Most of the qualifying disabilities at the time were physical and [visible].”

After the ADA was passed, guidelines were expanded to include mental illness and seizure risk, in addition to physical ailment, so visual cues became far less notable.

“You can’t tell if someone needs a service dog now,” said Bowskill. “The law was written so you can train your own service dog, and by law, you don’t need an ID.” And as we, as a culture, become even more accustomed to steady streams of “Sure you can!” responses and discomfort demolishing inventions, our reluctance to leave pets behind is only trending upwards.

But for service dog owners just trying to lead an autonomous existence and those patrons simply tired of seeing dogs in places previously forbidden, it’s a scary thought. “Sometimes, [people] just assume that my service dog is a fake,” said Brozman. “I explain to people again and again, and I show them that my dog is perfectly trained and there to help me, yet people still stigmatize us.”