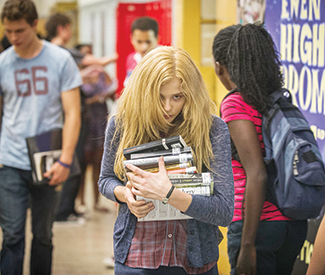 YEAR IN FILM While teen bullying might be quite topical, it’s far from being a new issue, as evidenced by Stephen King’s first published novel, Carrie. Set in the hormone-jittery corridors of a suburban high school, the 1974 tome details an outsider’s humiliating entrance into womanhood, as well as the ruthless revenge she enacts on her cruel classmates after she discovers she has the power to move objects with her mind.

Dubbed “The Black Prom” by the book, the disastrous dance at which Carrie White is humiliated for the last time takes on the ominous tenor of a terrorist attack or a wholesale massacre — a fictional foreshadowing of Columbine-scale carnage. While the fact that Carrie has been bullied is positioned as the motive for her rampage, her actions suggest far more than just a wounded lashing-out or a classic revenge fantasy. Although the phrase wasn’t yet common, what Carrie most resembles is a weapon of mass destruction, not a misunderstood misfit. What makes Carrie a horror story is the inhuman scale of her murderous frenzy.

The year 2013 marked a revival for the enigma that is Carrie White, with a remake of the 1976 Brian De Palma movie (as well as, incidentally, the 1988 musical). Director Kimberly Peirce had the harder struggle for relevance, as the original film is considered one of the best horror films ever made, garnering Oscar nominations, American Film Institute nods, and a generation of moviegoers who will never forget jumping in their seats at its oft-imitated, last-act “gotcha” scare.

In Peirce’s fitful homage, the dreamy haze of De Palma’s slo-mo sequences is replaced by a glut of clunky CGI shots that shred the screen. Stepping into the role made iconic by Sissy Spacek, the decidedly non-frumpy Chloë Grace Moretz unleashes her telekinetic talent as a sort of wizardry — striking Merlin the Magician poses with outstretched hands. It borders on irritating. And the mean-girl posse’s reliance on their camera phones and YouTube channels stands to date Peirce’s movie for future generations, just as surely as the hairstyles in De Palma’s date his.

Speaking of which, the De Palma movie admittedly has a few eye-rolling moments of its own. It’s so comfortably bound to the conventions of the seventies that trigger-tempered gym teacher Miss Collins (Betty Buckley) both chain smokes and wears raccoon-thick eyeliner to class, and teen heartthrob Tommy Ross (William Katt) sports a mane of ringlets so angelic you’d swear they were spun from pure disco gold. Whenever Carrie uses her burgeoning powers, a Psycho-esque violin riff screeches in the background, and John Travolta’s doltish bad boy barely appears capable of tying his own shoelaces, let alone engineering his patented blood-bucket humiliation device.

But what makes the story of Carrie so horrifying is precisely that which places her beyond reconstruction. What neither De Palma nor Peirce can quite manage is turning Carrie into a righteous anti-hero. The more they try to create empathy for their tortured protagonist, the more cartoonish and exaggerated her destructive frenzy appears — a gratuitous tsunami of blood, blaze, and blade. Ultimately what works against turning Carrie into a victim is simply that the force of her firepower is too great. She might not have plotted her vengeance, but she’s fully aware that she’s packing her own kind of heat. From the first moment she deliberately uses it to kill, she is damned.

Carrie‘s overkill also stunts its potential as a darkly comedic revenge fantasy à la Heathers (1988), since Carrie, like so many real-life teen shooters, winds up dead herself. Only one of her repentant classmates tries to reach out before the inevitable happens. It’s this scene that most stymies both De Palma and Peirce, since King’s quiet dénouement is decidedly uncinematic — yet it’s a powerful one, an exchange of final words and psychic impressions as Carrie’s life ebbs out of her beside the wrecked remains of the roadhouse she was presumably conceived in. Here, at last, is the moment of self-awareness — and yes, regret — that we need in order to recognize Carrie White as another casualty of her own paranormal capabilities. And until someone figures out a way to film it, we’ll never quite be able to believe it on the big screen. *