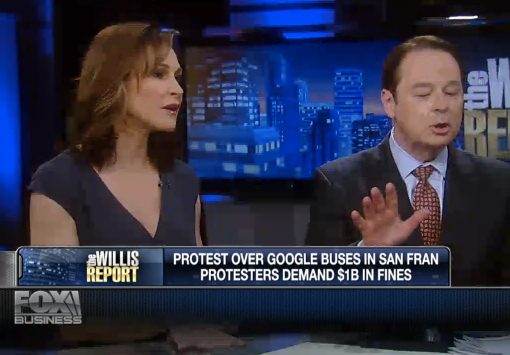 Those of us in the Bay Area have long followed the rising rents, floods of evictions, and growing resentment between long-time Bay Area residents and the new tech elite. Now it seems the national media is catching on. National reporting of the Bay Area class war is on the rise.

We’ve rounded up some of the more colorful coverage, which runs the gamut of different perspectives (even among the so-called “objective” news outlets). Some say the resentment is understandable, some say the blame against techies is misplaced. Some, like The Huffington Post, reached out to protesters for interviews, while others simply reblogged local reporters’ Tweets and video – including the Guardian’s.

Regardless of which of the articles you most agree with, the one thing we can all agree on is that things are changing fast. Just this week, Mayor Ed Lee announced his plan to prioritize and streamline construction of affordable housing in San Francisco. And the mayor’s pal, Ron Conway, announced via a press release today that local tech/government partnership group SF.citi will form three committees to address rising inequality in San Francisco: one on housing (led by SPUR’s Gabriel Metcalf), another on philanthropy (shaking down rich peeps for cash), and another on education (hoping to form a tech pipeline from SFUSD to SFSU to jobs).

But why blockade the tech employee’s buses? Why not protest the mayor instead?

“People say ‘you should protest city hall!’” organizer Leslie Dreyer told us. She had a large hand in organizing the first Google bus protest that blew up in the national press last week. There’s a problem with that, she said.

“We did that every day,” she said. “No one noticed us until we protested a Google bus. There’s a tension when you take it to the street.”

Maybe the national press gave Mayor Lee the nudge he needed. Decide for yourself. Below are a few examples of the national news outlets highlighting the Bay Area’s growing inequality, covering the first tech bus protests last week, and today’s.

National Public Radio didn’t just do one article on the Google bus protests, they used the first incident as a catalyst for a weeklong series on inequality in the Bay Area. Kudos to them for going a step beyond the protest, and digging into the issues that prompted it in the first place.

One of their best pieces covers Manny Cardenas, a security guard at Google.

“Cardenas says it is strange being on Google’s campus, watching the regular employees drive around on company-supplied bikes and scooters and taking food home.

‘You feel like you’re different,’ he says. ‘Even though you’re working in the same place, you’re still like an outsider. And it’s weird because you’re actually protecting these people.’”

The Times covered the growing inequality before the protests, but followed up with a few quick pieces on the tech bus rallies in San Francisco as well. Their take featured tweets from the tech community itself, who continued to hammer home on the point that the tech buses help take cars off the road. Uh techies, hate to tell you, but the point of the protests is not about taking you out of your buses, but about paying your fair share, like the robotic voices on the Muni buses tell us to do every day.

My Gbus got hit by protesters in Oakland and they broke a window. pic.twitter.com/VGCyhBLgyd

Talk about missing the point, Fox News program “The Willis Report” coverage of the tech bus protests is blissfully comical. Watch Tamara Holder, the one female commenter, have to explain she knows what the word “pithy” means. Oh boy.

“Google is a national treasure, a force for good. San Francisco should be really glad its people work at Google, yet now they’re beating up on the company… I’m trying to find it hard to understand the resentment. It just seems like it’s resenting Google because its employees are rich.”

We only wish Jon Stewart would’ve covered this silliness.

Salon approaches the issue from a “Google is smarmy and weird,” perspective, touching on the idea that maybe the class war is a culture war as well.

“If you’ve had the misfortune of watching “The Internship” — the most profound artifact of brand placement in cinema history — you’ll have been told that Google, and its ruling ideology of “Googliness,” is nothing if not purportedly a warm and cozy vector of innovation, with its own internal, coddled ecosystem.”

This Huffpost piece is notable for the video at the top of the page, featuring an interview with local activist Erin McElroy, the leader of the Anti-Eviction Mapping Project. The piece also actually tries to explore the tech bus non-payment of city fines for using bus stops, something some of the other pieces completely avoid altogether.

“The protest centered around Google’s use of the city’s Muni bus stops for the last two years — a practice that protesters allege is illegal and would total $1 billion in owed fines. Activists from the San Francisco Displacement and Neighborhood Impact Agency stalled an employee-filled Google Bus at the corner of 24th and Mission Streets for approximately half an hour on Monday morning with mock traffic signs citing the shuttles for illegal use of public infrastructure.”

CNET took a look at the antics of Max Bell Alper, whose “theatrics” in posing as a Google employee arguably helped catapult the conversation on Bay Area’s tech driven inequality into the national spotlight. Nick Statt makes this observation about Alper:

“…what Alper did was something special. He lied to us, and in doing so, got us all to start throwing rocks and then look only at each other when the mirror shattered. Mission accomplished.”

One of the few outlets to play it straight, the Wall Street Journal’s new reporter Nathan Olivarez-Giles (a Missionite himself) pointed out that Alper is no San Franciscan, and highlighted the differing opinions among the protesters of his “theatrics.”

“Deepa Varma, a lawyer with the group Eviction Free San Francisco and an organizer of the bus protest, said the protesters have mixed feelings about Alper’s staged outburst.

‘We didn’t know that was going to happen and it’s too bad because the point was really to connect the housing crisis to the tech industry,’ Varma said.

Google did not respond to a request for comment.”

Max Bell Alper, not as clever as he thinks he is. http://t.co/bTptVLSWbj

These three outlets make the argument that the protesters anger is misplaced, and should rally against government, not techies, instead. But as we’ve pointed out, that doesn’t tend to get attention, whereas protesting techies does (or else these three outlets likely wouldn’t have written stories in the first place).

The Wire: A fake fight at a real protest blames the wrong people for a serious problem

Wired: In This Silicon Valley Tech Culture and Class War, We’re Fighting About the Wrong Things

The Atlantic Cities: Why I’m Not Embarrassed to Have Been Fooled by the Google Bus Protest Hoax

In this piece for The Atlantic Cities, Sarah Goodyear points out that with real tech haters like Peter Shih (though now we have Greg Gopman too) referring to San Francisco women as “49ers” (4’s who think they’re 9’s) and saying our foggy weather is “PMSing,” buying Max Bell Alper’s Google employee impersonation wasn’t all that much of a stretch.

But she takes it the next step further, and tries to build bridges between all involved.

“Will the next generation of tech entrepreneurs abandon the suburban campus model that makes Google buses necessary? We’ll have to wait to find out, although the rise of the tech sector in New York – where public transportation and pedestrian culture are more robust than anywhere else in the United States, and the bubble of privilege is less impermeable – may be one indication that things are changing.

In the meantime, the obnoxious tech guy who wasn’t a hoax, Peter Shih, did try to make amends. After his offending entry on Medium came down, Shih posted a note of apology on the site:

‘I don’t deserve any forgiveness for the stupidity of my actions and words, but I sincerely hope to demonstrate by my future behavior to humbly build up and not tear down the communities and people around me.’

I’m inclined to give Shih the benefit of the doubt, and Alper, too. Not to mention myself. We’re all just trying to figure this out, after all. And sometimes it’s the mistakes you make that teach you the most.”

Undoubtedly a new slew of articles will follow today’s protests, as the smashed windows of an Oakland Google bus are the ultimate media bait. Post any new articles you’d like in the comments below.