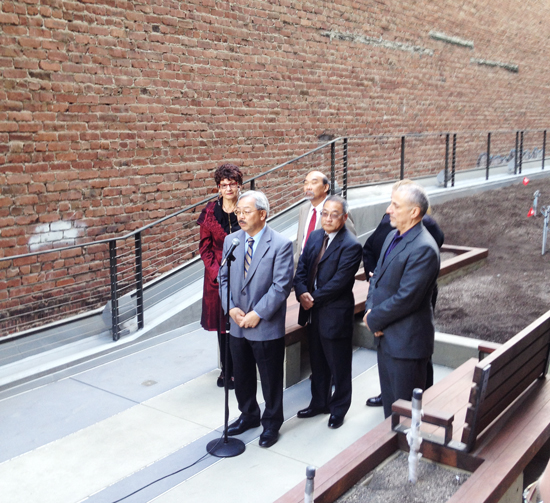 Mayor Ed Lee stood on the rooftop terrace between high brick walls of the soon-to-be-built Natoma Family Apartments, and in the distance, the buzz and clanks of nearby construction echoed his message of the day: Build, baby, build.

Today (Wed/18) the mayor announced an executive directive for all San Francisco government departments with a hand in housing development to prioritize construction of affordable units, from completely below market rate (BMR) projects to those that have a mix of BMR and market rate units.

The Department of Building Inspection, Mayor’s Office of Housing, Planning Department and others involved with approving development will all reorient their priorities towards getting new affordable housing built — a stark indicator of just how potent this issue has become after months of high-profile evictions and progressive organizing and demonstrations.

“It isn’t always on the private sector, we’ve got to have a stake in the action as well,” Lee told reporters gathered at the Natoma apartment building.

“(San Francisco) is expensive,” he said, “but we don’t have to accept it. We can do something.”

With the tech-fueled housing crisis pricing out San Franciscans left and right, and Ellis Act evictions surging 170 percent in the last three years, the city is in dire need of housing help. Even the national media has picked up on San Francisco’s rising inequality, even if some local media outlets have been slower to react.

But as progressives have noted before, you can’t simply build your way out of this crisis, as Lee acknowledged. His directive carries a promise to incentivize an emphasis on middle class housing, which has been particularly lacking in the housing now being built.

Mayor’s Office of Housing Director Olson Lee speaks to a reporter on the deck of a community garden at the new Natoma Family Apartments, which will open in January.

City rules will also change to protect current housing stock. Now, when a loss of housing is proposed, it will need to go through the Planning Commission for a discretionary review hearing. The mayor also formed a working group of city department heads to make recommendations to the mayor on how to preserve and create new affordable rental stock in San Francisco.

“It isn’t always on the private sector, we’ve got to have a stake in the action as well,” Lee said.

The promise of more housing in the city almost sounds too good to be true. Will the mayor’s plans reverse San Francisco’s affordable housing crisis?

Peter Cohen, co-director of the Council of Community Housing Organizations, said it sounded like a step in the right direction. “The proof’s in the pudding, of course,” Cohen told the Guardian. “It’s the kind of directive that I wish, honestly, would come out a year ago. The answer has been, let’s keep building and hope it fixes itself.”

By prioritizing affordable housing and mixed use housing, the mayor is using the leverage of government to get developers to do the right thing. “If developers are pushed to put more units they’ll do it,” Cohen said.

Let’s hope the new push from the mayor has come in time to stunt the crisis. Even at the Natoma property where he made the announcement, the need of San Franciscans for affordable housing was palpable.

The new Natoma affordable housing building has 60 units, and will open in January. How many San Franciscans applied to live there? 2,806.