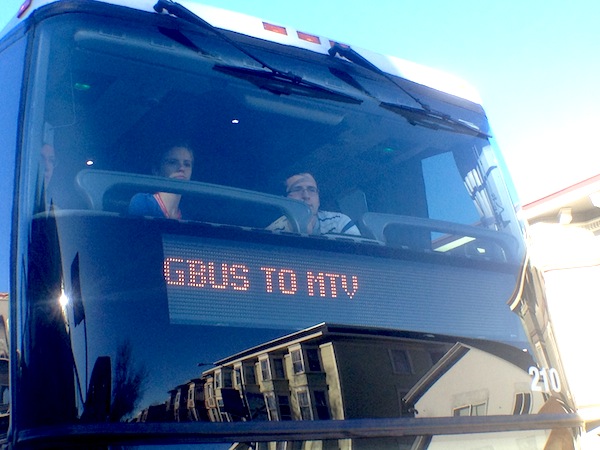 Evictions are rippling through San Francisco. Tensions are high. Tech workers with gobs of cash are driving up the rental market in what may be the newest tech bubble — or the city’s new reality. Protesters took to the street earlier this week, blocking a Google bus to draw attention to gentrification, and our video of a union organizer posing as a Google employee shouting down those protesters lit up the Internet.

In the wake of that national spotlight on San Francisco’s outrage, the Bay Guardian decided to talk to the bus-riding techies themselves and ask how they felt about the new tech revolution. Are they at fault for displacing long time San Franciscans? What did they make of Monday’s outrage?

We returned to the scene of the protest, 24th and Valencia streets, where workers from Yahoo, Genentech, Google, and others line up at Muni stops to be whisked away in mammoth private buses. Most had hands in their pockets, turning away when asked questions. Others decided to talk, but none would go on the record with their names.

“We’re very aware of the sentiment in the city against us,” one tech worker with grey hair and glasses told us. “But hopefully this (protest) leads to a positive conversation.”

He said that the envy was understandable. Public transit in the city “isn’t the best,” he said, but pointing to any one company to be at fault isn’t productive.

“Our economy lacks upward mobility, and the haves and have-nots are divided all over the country,” he said, not just in San Francisco.

But some of the techies themselves are “have nots,” as one tech worker, a middle-aged Java programmer sitting in Muddy Waters cafe, could attest to. As we watched the tech buses ride by, he told the Guardian he’s been out of work for a few months now. He used to work for a computer sketch software company called Balsamiq.

He’s lived in the city for 22 years. When he first moved into town, he lucked into renting a room for $175 a month. Now his rent is much, much higher, though he wouldn’t say by how much.

This is not the viral video of the staged argument, but from the same day. A protester enters the Google bus, and a bus rider shouts her out.

“I’m sympathetic,” he said, of the discord on rising rents. “But getting rid of tech isn’t the solution.” He pointed to a need for more affordable housing.

A blonde haired Apple employee told us that although he makes more money than the average San Franciscan, he can’t afford to buy a home here. He’s lived in the city three years, and worked at Apple for four. He took a balanced view of the protest, saying the stunt started a national look at inequality.

“It’s keeping (the conversation) at the front and center. You could argue it’s not fair to target one company, but I see both sides,” he said.

Tech should do its part to pay its fair share, the 19-year cafe owner of Muddy Waters said. Hisham Massarweh said he likes the tech folk, who are great for business. But the transit issue needs to be worked out, he said. He once got a $250 ticket for parking in the same bus stop outside his store that the tech buses park in every day — ticket and permit free.

Across the street, Jordan Reznick, a PhD student and teacher at California College of the Arts, said she’s seen many of her friends displaced. “I feel a lot of animosity towards Google and Google workers,” she said, as we sat just behind a line of Google employees waiting for their bus.

“I live in a small place with a family of four,” she told us, as it’s the best she could find in this market.

As she ran off to catch her ride to work, the Guardian approached a man who sat waiting for the same Google bus that was protested earlier in the week.

“San Francisco doesn’t have its shit together,” he said. The protest was about housing, but San Francisco needs to address that fast. And as for the Google buses, there’s no framework for Google to pay the city, yet. “If they could (pay) they would, going forward I’m sure they will.”

We asked him point blank if he felt guilty watching longtime San Franciscans lose their homes.

He took a drag of his cigarette, looked me in the eye, and said, “Every day. I love San Francisco with all my heart, and I feel tremendously guilty. Every day.”

As the bus pulled up he hopped on and headed to Mountain View.