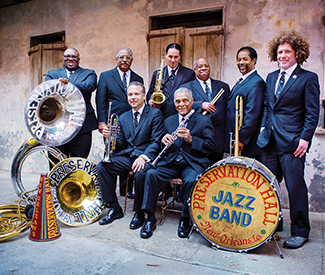 TOFU AND WHISKEY The tuba comes quickly, bubbling over excitedly at the start of the wildly entertaining “That’s It!” — the title track off the Preservation Hall Jazz Band’s first record of all original compositions. The vivacious New Orleans jazz album, released earlier this year, was a long time coming. The Preservation Hall Jazz Band has been a staple of Louisiana for 50 years, and in its different variations has released more than 20 previous albums of covers, tributes, and reworked classics.

And there’s a reason the tuba stands out: It’s tooted by creative director Ben Jaffe, whose father and mother, Allan and Sandra Jaffe, created the revolutionary Preservation Hall jazz venue in the French Quarter in 1961. Allan organized the first incarnation of the Preservation Hall Jazz Band in 1963 and was the group’s first tuba player. Ben and his brother grew up around the corner from the venue and spent most of their time there, hanging out at the venue with the greats. “We literally grew up at the Preservation Hall at the feet of these pioneers of New Orleans jazz,” Ben tells me from his current home (he still lives just minutes from the hall). He seems still in awe of it all, genuinely impressed and appreciative of his past with the venue.

He took over the group and the venue in the early ’90s after graduating from college (Allan passed away in ’87). Along with managing the day-to-day operations of the hectic venue, he also plays tuba along with bass, and produces the band’s albums. This newest release was co-produced by Jim James from My Morning Jacket. The core group of eight musicians recorded That’s It! last year, blasting out Dixieland and New Orleans jazz tracks like spooky “Rattlin’ Bones” and slowing down for twinkly songs like “Sugar Plum” on percussion, banjo, piano, trumpets, tenor sax, clarinet, tubas, and the like. “All combined, out of eight guys, we probably play something like 300 instruments.”

The band will play select tracks off its original record this weekend at the Davies Symphony Hall, but there’ll be another tradition taking over most of that performance: peppy, jazzy holiday selections. The band’s on-and-off again (but mostly annual) Creole Christmas touring show lands in SF Sun/15 (Davies Symphony Hall, 201 Van Ness, SF. www.sfsymphony.org).

The selections will include songs culled from the band’s storied past repertoire, holiday classics, and ditties that have a special meaning to the outsized group. The band’s “spry, charming” 81-year-old clarinet player, Charlie Gabriel, suggested one of the songs, “We Wish You,” which he heard in church as a young boy. The rest of the song list is under wraps for now, but don’t expect a gaudy Xmas spectacular.

“We’re not bringing the Rockettes, and we don’t have a light show. It’s really going to be an intimate evening of music,” says Jaffe.

But he knows the drill for upping the holiday charm, having performed a variation of Creole Christmas for the better part of a decade. Plus, he’s crazy for the holiday season — he loves to decorate and celebrates both Christmas and Chanukah.

“These Creole Christmas shows started at Preservation Hall and that’s when we decided it was something we should take on the road,” says Jaffe. “New Orleans music is a reflection of our community, and we have such a wonderful community of musicians and artists in New Orleans. Every time we play a concert, it feels like a family gathering.” And when they’re home from the road — they tour most of the year — the members of the Preservation Hall Jazz Band play the venue that bears their name two to three times as week.

They’ve long been the buzzing heart of venue, and the holidays are just another reason to celebrate with wailing horns.

When the boys were younger, Allan used to bring Ben and his brother around to different churches, senior homes, banks, and restaurants to perform live holiday songs, instead of sending out gift cards. “I still do it,” says Jaffe. “I wake up early on Christmas morning and go out with my horn and walk around the French Quarter to really remind me of my childhood.”

He adds, “Any reason to have a party in New Orleans, you know? If the wind blows we’re going to have a parade.”

San Francisco’s Happy Diving has that mid-’90s Weezer thing going for it, certainly, but there’s a fuzzier, punkier edge than anything off Pinkterton, like a lazier Rivers Cuomo on a slacker punk bender. The band plays this weekend with fellow Bay Area pack Cocktails, which features members of Dirty Cupcakes. It describes its sound as “slop-punk” but sounds closer to power pop on tracks like “No Blondes (in California)” off this year’s Father/Daughter Records-released debut EP, which Matthew Melton of Warm Soda recorded. Also cool to note: The opener for this grand occasion is Blood Sister’s first show. Thu/12, 8pm, $5. Knockout, 3223 Mission, SF. www.theknockoutsf.com.

Early LA punks the Weirdos (first active in that gritty hotspot ’76-’81) matched swagger to wit, chugging along thundering guitars and those gravelly, growly, depths-of-hell vocals and song titles like “We Got the Neutron Bomb.” They played with all the bands you might expect, given the time and place: Germs, Dead Boys, Middle Class. And more so, the legacy of the band and its ilk clearly influenced later SoCal bratty punks and snarling weirdos alike. And now, after a few revivals an oh-so-many decades later, that band of Weirdos is back again, arriving at Thee Parkside with VKTMS and the Re-Volts. Sat/14, 9pm, $18. Thee Parkside, 333 11th St, SF. www.theeparkside.com.

No relation to those Preservation Hall Jaffes we met earlier in Tofu and Whiskey (that I know of), Sarah Jaffe is indeed her own lady. Yet the Texas-bred singer-songwriter, who’s collaborated with Eminem, has the delicate whisper of Cat Power and the wild-woman howls of Fiona Apple. That’s just a longwinded way of saying her vocals are lovely and textured and worthy of live listening. She’ll make you feel something deep on songs like “Satire,” off 2012 release, The Body Wins. With Midlake. Mon/16, 7:30pm, $14. Bottom of the Hill, 1233 17th St, SF. www.bottomofthehill.com.