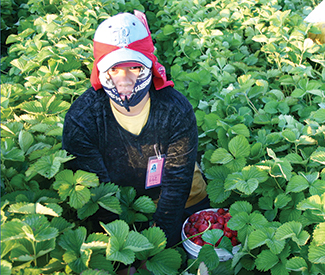 After two more hours of hiking, we stop in a dry creek. One of the younger men enlists help pulling large cactus spines from one of his legs. We sit in a circle sharing food. The tastes link us to loved ones and Oaxaca…

After we have hiked again through blisters for many miles and I have shared all my ibuprofren with the others, we stop to rest. We fall asleep, using torn-open plastic trash bags as blankets. Our coyote leaves to talk to his contact on a nearby Native American reservation about giving us a ride past the second boarder checkpoint to Phoenix….

Suddenly, our guide runs back, speaking quickly in Triqui. Two Border Patrol agents — one black and one white — appear running through the trees, jump down in our creek bed, and point guns at us.

According to the US Public Health Service, there are, on average, an estimated 3.5 million migrant farmworkers in the United States, the majority of whom are undocumented immigrants. At harvest season, most of them perform the backbreaking work of picking our fruits and vegetables for an average $12,500 annually; at other times, they share slum-like apartments or live out of cars looking for odd jobs — 68 percent of them wondering if they should return home to Mexico and risk another border crossing to the US when picking time rolls around again. Only 5 percent of migrant workers have health insurance, and what happens to the rest if they get injured or fall ill doing the work the rest of us won’t is an eye-opening American tragedy.

To many Americans, this cheap, legally and socially vulnerable population is a faceless brown mass in the fields somewhere, maybe receiving a noble thought at Cesar Chavez Day or inducing the occasional twinge of guilt in the produce aisle, if thought of at all. But a provocative, important new book by UC Berkeley Assistant Professor of Public Health and Medical Anthropology Seth M. Holmes, Fresh Fruit, Broken Bodies: Migrant Farmworkers in the United States (University of California Press), which is picking up awards and has been featured on mainstream news outlets, is helping to re-personalize migrant farmworkers and move their health care situation into the media spotlight.

As the US finally addresses the facts that it spends the most money on health care for the worst outcomes, that a huge chunk of its population has no health care at all (and is severely underpaid for its work), and that we’re dependent on undocumented immigrants to harvest our produce and keep food costs down, we’re only just starting to realize the irony in giving the people who devastate their bodies to provide our healthiest foods perhaps the lousiest health care deal of all.

Part heart-pounding adventure tale, part deep ethnograhic study, part urgent plea for reform, Fresh Fruit starts off with Holmes embedded in an ill-fated group of border-crossers from the mountains of Oaxaca: he gets arrested, they get deported after a harrowing stay in a detention center. Holmes then writes about his 18 months spent picking fruit alongside hundreds of others at a large family-owned farm in Skagit Valley, Wash., living in a closet with a dozen farmworkers in a rundown apartment while they look for work on the off-season, returning to Mexico to spend time with workers and their families, and shadowing the medical professionals in the publicly and privately funded clinics that serve migrant populations. Throughout, Holmes saw people “give premature birth, develop injured knees and backs, suffer from extreme stress, experience symptoms of pesticide poisoning, and even have farm trucks run over and crush their legs,” as he told Farmworker Justice magazine.

Holmes, a medical doctor as well as a doctor of anthropology — the book resulted from his thesis work — brings an enlightening complexity to the issue of migrant workers. (Including the label “migrant worker” itself, which, he notes piercingly at the end of the book, has been ossified with classist and racial overtones. If this group of people were flying over every summer from Europe or Hong Kong to secure investments on Wall Street, they would be called “international businesspeople.”)

He’s especially concerned not just with the grueling minutae of trying to receive treatment for the aches and pains that come with stooping to pick strawberries 12 hours a day, struggling to meet ambitious quotas in order to get paid very little, but also the larger, physically devastating effects of the structural violence visited upon a whole population by neoliberal economic policies that continue to widen the global income gap and entrench the wealthy in power. His “participant observation” method of studying migrant farmworkers means he writes about his own experiences in the field, and he brings his sophisticated anthropological knowledge to bear on the way contemporary society ensures that migrant farmworkers stay on the bottom rung of the economic ladder, building on the work of Pierre Bordieu, Philippe Bourgois, and others who’ve studied power relationships and structural violence in terms of workers’ health.

But, although there are scholarly footnotes and personal interjections, Holmes avoids an icky “anthropological tourism” vibe by providing the workers themselves with room to tell their histories, talk about their bodies, and react to the way they’re treated. People like Abelino, who falls victim to a series of misunderstandings over his severely injured knee, or Crescencio, who suffers acute headaches whenever he’s called racist names or ordered around degradingly, but is labeled a potential domestic abuser by one caregiver and resorts to drinking up to 24 beers per night to soothe his pain. We also hear from Marcelina, who talks to a Skagit Valley community gathering about low wages and high quotas.

And Holmes lets the owners and operators on all levels of Skagit’s Tanaka Brothers Farm — a pseudonym to protect his sources — speak as well, about the need for cheap labor in an increasingly competitive global agribusiness environment, among other concerns. (One especially interesting tidbit: organic distributors pressured Tanaka Brothers Farms to sign a machine-pick contract, which relegates farmworkers to the pesticide-ridden fields, despite the growing market for organic produce.) The Japanese-descended Tanaka family is deeply embedded in the Skagit Valley community, with roots stretching back before the Japanese internment period. The farm has seen different waves of migrant workers from poor white to Asian to Mexican. The Valley community itself has a fascinating relationship with the migrant community, emerging from it while reacting to it, developing its own social hierarchy as each generation “graduates” from farmworker to resident.

A lot has changed from Chavez’s day. For one thing, the previous generation of field workers, mostly from Guadalajara and northern Mexico or from Central America, has gained a toehold on American society — like the Asian workers that preceded them, many Hispanic workers’ children, placed in American schools, have grown up, providing their parents with a path to citizenship or work visas that allow them access to better jobs.

Today, a lot of workers are not mestizo Mexican, but of indigenous Mixtec descent, from increasingly violent mountain villages of Oaxaca in southern Mexico like San Miguel and San Pedro. Bloody land disputes, ethnic tension, the collapse of the local agriculture market that was exacerbated by the North American Free Trade Agreement in the 1990s and continued through the recent global recession, and the rowdy and malevolent presence of US-funded anti-drug military forces (strange since no major drug cartels operate there) have isolated this area, forcing its men, women, and children to look for work in America.

Triqui, not Spanish, is their native language — just one of the major hurdles when it comes to delivering healthcare to this population. Another hurdle comes with the specific cultural record of Triqui and general Mexican healthcare. Many Triqui workers rely on native healers, even in American farmworker camps, whose methods of consulting cards and drawing evil spirits from bodies using oils surely provide some psychosomatic respite. But reliance on native healers — out of a combination of tradition, availability, and fear of discovery or of health institutions in general — often prevents workers with deeper problems from receiving a wider range of appropriate treatments. Self-medication through alcohol is common (Holmes observed no drug use), and in one case a man named Bernardo took to the habit mashing his abdomen with soda bottles to ease a chronic stomache ache.

The migratory nature of these workers — and their shifting relationship to the law — all but insures disruptions in preventative and prescriptive care, lack of access to medications, frustratingly spotty medical records, and the inability to form a valuable personal bond with a trusted physician. But the major hurdle is that the system put in place by the government to serve migrant populations hasn’t been revisited since 1962, when a wave of media concern spotlighted the plight of migrant workers — most of whom, at that time, were white Oakies descended from the great Dustbowl diaspora of the ’30s and ’40s. The system has been only slightly adapted and enlarged since then, with dozens of clinics and organizations competing for limited grants, and nonprofits charging as little as they can (often still a steep fee on a farmworkers’ wage).

The picture Holmes paints of the clinics he visits and the doctors, nurses, and caseworkers he encounters is a mostly warm one — most health workers are hard-working and well-intentioned, stymied by cultural and linguistic differences, lack of funds and proper medical records, and racist attitudes from the surrounding communities. Some are prone to misinterpretation, and there are a couple outbursts of frustration that borders on stereotyping.

Still, most migrant worker health care providers are dedicated to their patients’ welfare. As one doctor, a mountaineer who serves the Tanaka Brothers Farm workers, put it: “It’s a very difficult problem. We have a bad situation where citizens cannot really afford health care. And the migrant workers, I truly believe they should have at least the same access as the others. I mean, this work that they are doing is something that nobody else is willing to do. That’s the truth. That’s probably the only reason why we are able to go to the supermarket and buy fruit for a fair price. So this is a group of people that really deserves our attention.”

That group will most likely be left out of the Affordable Care Act’s initial implementation, with possible implications for other, growing fields of migrant work, like software coding or childcare. Holmes’ book will hopefully inspire other investigations into this critical area of the nation’s health care gap — and concerted action to bridge it.