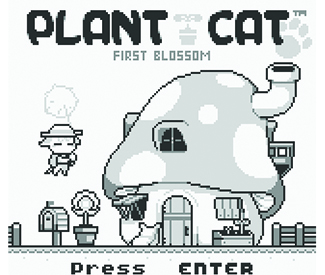 YEAR IN GAMER This list is for all the gamers sick of blasting your last alien, zombie, or oppositional soldier of the moment (Nazis, Soviets, snore). That’s it. Done! As indie games grow in popularity, games that eschew the “shoot everything” mentality are becoming easier to find. Get your joystick thumbs ready and enjoy this list of 2013’s “top games where you don’t shoot things.”

There are treasures to be found, and Quince the Plant Cat will snag them all with his ability to create ridiculously long vines that curve and bend off cliffs and walls. It’s a game as cute as Kirby’s Dream Land, with a heavy Game Boy esthetic, a nod to the annual Game Boy Jam coding contest the game was made for. A side scrolling adventure à la Mario, the game (and soundtrack) is pure retro goodness. Though mouse and insect enemies abound, Plant Cat deals with them by feeding them vines, leading one to wonder if maybe all the evil Goombas in Mario are just hungry. flashygoodness.com/games/plant-cat

You are Born, a scrap of darkness that separated from “the Void” and formed sentience. Now the Void wants you back. Nihilumbra is a deeply atmospheric, side-scrolling puzzle game; playing as Born you discover different colors, which you magically paint around levels in order to escape the Void’s teeming, mysterious black mass. Colors help you escape the traps of the world: Blue is ice, speeding your runs; brown sticks enemies (and puzzle objects) in their places; red burns things away; and green turns surfaces into trampolines.

Throughout your travels, the Void questions your right to live, and solving the mystery of your existence is half the fun. Nihilumbra is a heady game that first debuted on iOS and Android last year, but only recently was released on the computer — with vocal performances and HD graphics. Now available on Steam and as a web browser demo online, Nihilumbra will have you hooked. www.nihilumbra.com

Quick! Clean the puke! Bat the piranhas away from the guy dancing underwater! Dumb Ways to Die is a hyperactive mobile game tasking the player with protecting cute jellybean creatures from eminent death in new ways every 10 seconds or so. Failure to save the adorable smiling beans leads to all manner of hilarious deaths: bears chomping half their bodies off, trains flattening them into bean paste, pythons biting them in the eyeball, etc. It surprised the bejesus out of me to find out this was a Public Service Announcement game made by Melbourne, Australia’s Metro Trains network. The lesson? Rail safety. Why can’t more municipalities create games revolving around cute bean people? San Francisco, get on it! www.dumbwaystodie.com

Waking Mars is one of those games that makes you want to explore its every nook and cranny. The year is 2097, and playing as Dr. Liang, an astronaut and research scientist, you land on Mars and discover a cave under ancient ruins. That’s when you meet Martian life for the first time, only the aliens aren’t monsters — they’re plants. The game quickly becomes part exploration, part horticulture simulator. Armed only with a jetpack and his science skills, Dr. Liang must experiment with and breed the “Zoa” to help solve the mystery of how the red planet turned to dust. Waking Mars is the very opposite of shooter games, as growing ecosystems and creating life are the axis of gameplay (instead of, ya know, killin’ stuff). Technically speaking, this game squeaked onto Steam in December 2012, but it’s still notable enough to include here. tigerstylegames.com/wakingmars *