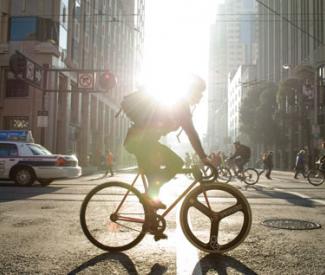 San Francisco and its transit agency have lofty goals. Half of all trips made in San Francisco by 2018 will be by modes other than cars, and 20 percent of vehicle trips will be by bike in 2020, if the city has its way.

One major obstacle to both of those goals is paint. Yeah, the gooey stuff.

Sup. Eric Mar convened a hearing on bike expansion strategy today, exploring a newly released report he requested from the budget analyst which outlines the (bike) path to a more fixie-friendly San Francisco.

The report outlined obstacles to expanding bicycle use in the city and gave many recommendations on raising funds, but one of the lowlights was a series of backlogs in the San Francisco Municipal Transportation Authority’s Traffic Paint Shop, which paints bike lanes and sharrow signs on pavement across the city.

The problem is, the bike lanes aren’t getting painted. At least not all of them.

“I felt, with bike advocates and others, pissed off,” Mar said, of the lack of progress on bike safety implementation in the city. “This hearing is coming from much of those frustrations.”

The paint shop’s backlog of projects stretches all the way back to 2010, according to the report. The Bay Guardian contacted the SFMTA for a response, and were told they were in the process of finding someone from the paint shop to speak.

But that might be hard to do, as one of the contributing factors the report outlined is a lack of leadership. The paint shop has had a managerial vacancy since April of 2011, and though the position was briefly filled in June 2012, it was just as quickly vacated again.

How much does San Francisco spend on bicycle infrastructure per capita, versus LA, Amsterdam, and Portlandia? pic.twitter.com/OXEgXkvcqs

This spells problems for the city’s bike expansion goals.

“The Traffic Paint Shop was found not able to promptly fulfill all of the work requested resulting in a backlog of projects that delay project implementation including bicycle improvement projects,” the budget analyst wrote in the report.

So the board of supervisors and bike advocates can achieve new victories, getting project approvals for bike lanes and safety improvement projects left and right — but until the paint shop shapes up, some of those projects may be pushed back years.

They also lack an electronic database system to track its project’s progress, creating further slowdown, according to the report.

The paint shopped developed a plan to address the issues that have caused the backlog, but the solutions have not been completely implemented. Their new database, for instance, would not go online until 2014, and only if the funding is made available.

They’ve made some progress though. The total backlog at the beginning of 2013 was 394 projects uncompleted, and are now down to 149 projects.

The report shows they are slowly addressing concerns, but the source of the problems themselves have not been addressed.

The Sustainable Streets Division, the umbrella division of SFMTA that implements bike capital projects, also has issues keeping up with its workload. Bridget Smith, a deputy director working in the division, told the budget analyst they would need anywhere from 15-20 additional planners and engineers to meet the city’s transportation growth needs.

The projects are not just about expanding bike use, but about making rides safe. Amelie Le Moullac was killed while cycling on Folsom back in August, and her death was cited during the hearing as a catalyst for the safety projects to pick up the pace.

Douglas Nicolson, a dues-paying member of the SF Bike Coalition, spoke at the podium to Sups. Mar, John Avalos, and Mark Farrell.

“Bicycling is my primary means of transportation, I’ve ridden my bike through SoMa every day,” he said. “Looking into the future, my girlfriend and I are starting to think about having kids. Will I still be able to depend on a bike when I have someone who depends on me?”

Mar told the Guardian this was a first step to push for more funding and support from the mayor and the board to expand bike capital projects and safety throughout the city. “According to the findings of this report, San Francisco cannot afford not to fund bicycle infrastructure,” he said.