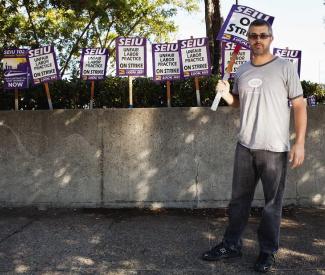 Two of BART’s largest unions will announce a lawsuit against the BART board of directors today on the steps of the Alameda County Superior Court at 11am, which they plan to file shortly before the press conference.

The suit will directly challenge the board’s Nov. 21 decision to ratify a contract between the unions and BART management without a hotly contested provision on family leave.

In their announcement of the suit, SEIU Local 1021 and ATU Local 1555 allege the board made “illegitimate and unprecedented actions” in ratifying the contract while removing a section on family leave, which was signed off on by BART management in July. Under the provision, workers who go on leave under the federal Family and Medical Leave Act would be paid for six of the 12 weeks the law allows them to take unpaid.

Management has since called signing off on family leave a “mistake,” and the board asked all sides to ratify a contract without the provision, hence the lawsuit.

But would a lawsuit mean a new strike?

“That’s what everybody is asking,” SEIU Local 1021 spokesperson Cecille Isidro told the Guardian. “The unions aren’t ruling out any options, but no strike is being called or scheduled at this time.”

BART spokesperson Luna Salaver told the Guardian last month that “it was a mistake that a provision rejected twice by BART management ended up in the stack of approved documents.” She noted that it was caught as the district prepared to give the contract final approval on Nov. 21, though it was already signed by the two unions.

“We were never confused as to the status of the Family and Medical Leave Act agreement,” Local 1021 Political Director Chris Daly told the Guardian, in our earlier coverage, which you can read here.

Isidro said more details on the lawsuit would be available at the press conference at 11am.