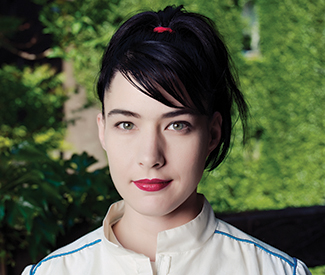 Though she was not entirely absent from the public eye, she did not make any new music or tour for nearly a decade. Beat down by a mysterious illness, she seemingly tumbled into hardcore self-preservation mode, contributing her personal files of zines, show flyers, and lyrics to the “Riot Grrrl Collection” at New York University’s Fales Library.

This archival material would prove key to Sini Anderson’s new documentary about Hanna, The Punk Singer. The film includes many lesser-seen clips from the early days of Bikini Kill, the band’s tours through Europe, and rare early moments with Hanna’s husband, Beastie Boy Adam Horovitz.

“There’s some unfortunate and there’s some fortunate in this,” says Anderson, speaking to me in a hotel in San Francisco ahead of the film’s Bay Area premiere at the Oakland Underground Film Festival in September. “The unfortunate is that Kathleen started getting incredibly sick, and she was getting worse and worse. [But then] she decided to pull all her materials together and start archiving them. So she had a few interns and for a couple of years they just pulled all this stuff from all over the place, so by the time we started the film project, a lot of this was in one place.”

Anderson is a Portland, Ore.-based feminist artist who co-founded Sister Spit while living in SF and has worked in film for a decade, though this is her first documentary. She suggested the idea to Hanna while Le Tigre was making 2011 doc Who Took The Bomp? Le Tigre on Tour. While Hanna became the reluctant face of the riot grrrl movement in the ’90s, she’d never granted the media access to her whole story, at least partially because she didn’t want to be misunderstood.

“She had been out of music for six years at that point, and in [the realms of feminism and politics], there just didn’t seem to be any kind of action going on. Things seemed complacent,” Anderson says. “I said, ‘Kathleen, people need to hear your story, and they need to hear it now.'”

Using archival footage and present-day interviews, the doc covers Hanna’s childhood, the beginning of the riot grrrl movement, Le Tigre, and the resurrection of her post-Bikini Kill solo project, the Julie Ruin. Anderson interviewed Hanna in a series of intimate, enlightening sit-downs at her lake house, which are delicately spliced throughout the film between older clips and interviews with Hanna’s contemporaries: Bikini Kill’s Tobi Vail, Billy Karren, and Kathi Wilcox (now of the Julie Ruin); Kim Gordon; Joan Jett; Carrie Brownstein and Corin Tucker; and teenage Rookie Magazine editor Tavi Gevinson, who wears the colorful “Feminist” sweater gifted to her by Hanna.

The main bulk of filming was done over the course of a year — and it was a momentous one. Countless doctors had misdiagnosed Hanna by the time Anderson began filming, without an end in sight. Halfway through filming, she finally had a name for her illness: late-stage neurological Lyme disease. When she began treatments, filmmaker and subject decided not to shy away from the vulnerability of moments like Hanna taking her meds and experiencing their uncomfortable after-effects.

“Once she started treatment, it was a roller coaster — she got worse, and then she got better, then she got worse. We had to plan the interviews around when she was up for it,” — explains Anderson, who, incredibly, was also diagnosed with Lyme disease during filming, from an unrelated incident. “I really believe there’s so much power and strength in that vulnerability. It really is important for other women to see that we can tell our truth, we can let people see what’s going on — that doesn’t make us weak, that makes us stronger.” Anderson is now working on another documentary specifically about Lyme disease.

During filming for The Punk Singer, Hanna decided to put together the Julie Ruin, her first new musical act since the end of Le Tigre. This year, the band released its full-length, Run Fast, on Dischord Records.

“She says it really eloquently in the film: when she realized that she may never again be able to do this thing she loves, she realized she wanted it more than ever,” Anderson says.

For the director, one of the biggest moments during filming came from this realization. Hanna sits by her fireplace, surprising herself as she talks about why she quit music — why it was easier to just say she’d already said everything she’d needed to sing. She didn’t want to admit to anyone, including herself, that she was quitting because she was sick. In the doc, Hanna seems taken aback and tears up a bit, but gives the go-ahead to keep filming.

The Punk Singer‘s other epiphany comes at the very end, on the last day of filming, in what became the last scene of the film. Hanna asks, “What is my story? I have no idea,” and begins mentioning moments from her life. “I thought, who is going to believe me? Other women will believe me.”

Says Anderson, “It was about being believed, and being heard, and having her truth be validated. That’s [her] story.” *