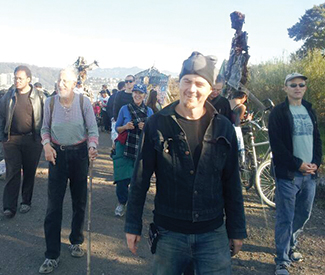 As the squatter residents of Albany Bulb make one final push against being evicted from their home in a former landfill, the city of Albany is pushing forward with its plan to change the untamed space into a waterfront state park (see “Battle of the bulb,” Sept. 24).

The first signs of the transition came on Nov. 22, when a temporary shelter was set up for residents whose camps would be cleared. The shelter came after a disappointing week in court left the 50 to 60 residents of the Bulb without the stay-away order their advocates had sought, which they intended to use to keep the city and police at bay during the winter.

On Nov. 18, the residents and their attorneys received word that the stay-away order was denied by U.S. District Judge Charles Breyer. After the decision and an Albany City Council meeting later that evening, campers and area activists set up a permanent settlement against the eviction after marching through the streets of Albany.

Barricades made of rocks were set up at the Bulb to resist police getting into the camps. However, the rain that followed for a few nights inhibited their efforts, according to activists involved in the action. And the police, using a backhoe, destroyed the rock barricades. The city of Albany, according to a press release, is calling the transition “ACT” which includes, “Assistance to homeless, including housing-centered outreach, transitional services, support, and shelter; Cleanup and maintenance of the Bulb; and Transfer of the Bulb to McLaughlin Eastshore State Park.” “As part of the City Council’s Strategic Planning Process conducted in 2012, the City Council identified key goals for the City,” Albany City Clerk Nicole Almaguer wrote in an email to the Guardian. “One of which is to ‘Maximize Park and Open Space’ including developing a plan to transition the Bulb into Eastshore State Park, and to improve accessibility for general public use of all of the Albany Bulb as a waterfront park.” Almaguer stated that part of the plan included a temporary shelter and support services, which started this summer and is headed by Berkeley Food and Housing Project. The BFHP also provides case management for the Albany campers interested in securing housing outside of the Bulb.

While the city has provided a housing subsidy program to help Bulb residents with rent, a portion of it will also need to be covered by the tenant. Many of the Bulb residents are only supported through government programs such as SSI, and cannot afford housing costs.

In addition, most residents, and their attorney Osha Neumann, who is also a longtime contributor to art at the Bulb, say that the city does not have any affordable housing in which the residents can transition into. Managed by Operation Dignity, a nonprofit designed to help homeless veterans, the transitional shelter is set up by Golden Gate Fields racetrack near the entryway into the Bulb.

“I was out… talking to people and was overwhelmed by the fragility and vulnerability of many of them, as well as their strengths,” Neumann said of the residents in an email to the Guardian. “The portables are awful. You look at the Bulb and all the life and beauty that’s out there, and then you look at those anonymous utilitarian boxes, and really you expect it all to be stuffed into those containers? 22 men in one, eight women in the other? It’s all really appalling.” According to the shelter’s posted rules, the doors for the shelter open at 5:30pm and close at 8:30am. Showers may be taken 8:30-9:30pm, and breakfast is served 7-8am. The sexes are separated, and pets must stay in kennels outside of the shelter. There are also no “in and out privileges” and if a person doesn’t return by 8pm they are not admitted into the shelter. No one stayed in the shelter the first three nights it was available, according to city reports. Amber Lynn Whitson, a Bulb resident, said that access to the shelter is difficult for people, and doesn’t address the need for people with disabilities to access a bed during the day. “At least two individuals were turned away at the door to the shelter, due to their names not being on ‘the list’, she said in an email. “Both were told that they could stay in the shelter, despite their names not currently being on ‘the list,’ but only after getting ‘a voucher’ from BFHP.” The transitional shelter came to the residents’ lives after Breyer rejected the campers’ request for an injunction to block the eviction with a temporary restraining order. A lawsuit also filed by the residents against the eviction remains open, according to Neumann.

Based on information obtained in court documents, $570,000 was allocated to remove the Bulb residents, based on a Albany City Council decision made on Oct. 21, with $171,000 spent on the cleanup of the campsites and the remainder spent on the two portable trailers with bunk beds to serve as transitional housing for six months. As of now, the shelter’s efficacy to get the campers off the Bulb, as well as the residents’ efforts to resist the transition, remains unclear.

BULB ART TO BE CLEARED

The Albany Bulb, a wild shoreline space near Golden Gate Fields and a former landfill for BART construction and other industries, is well known for its art. Now that a transitional shelter looms over the entrance as part of the city’s plan to remove the residents from the Bulb, campers, activists, and artists came together this past weekend for a festival of resistance against the eviction.

The rubble and sculpture filled space will soon be transformed into part of the Eastshore State Park system. The event drew around 60 people, according to resident Amber Whitson. She led an art walk on Nov. 29, giving the history of the art at the Bulb and explaining why it’s important to preserve it as a cultural resource.

“Some things should remain sacred, and Sniff paintings are out on the Albany Bulb,” she said, referencing works by a group of Oakland-based artists.

Other prominent Bulb artists, such as Osha Neumann and Jason DeAntonis, who built massive sculptures made of found wood and parts along the shoreline, were on hand to speak about their contributions and the personal significance the Bulb holds for them.

While residents have come and gone throughout the years, the art has remained a constant draw. Graffiti artists practice their craft, and sculptors work undisturbed, using debris that is scattered around. Even some of the campers’ shelters, makeshift shanties of concrete, wood and tarp, could be considered artistic.

Once the transition of the Bulb from untamed outcrop to a state park of well-kept trails is further along, the city plans to remove most of the art currently installed there.

The campers and activists organized the art walk as part of a three-day festival of trainings, workshops, and music, to enjoy the space, but also to educate residents and others about how the space could be kept in its current state. “I know that organizing is continuing, and again, the shape it takes will depend on how the city goes about the planned evictions,” said Neumann in an email to the Guardian.

For now though, the art stands, in between garbage, rubble, trees and shrubs, a constant reminder that artists and Bulb dwellers are still around.