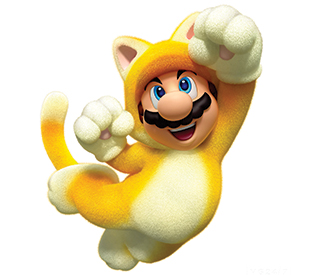 GAMER Winter is the time we spend with loved ones, and much of that time is spent trying desperately to escape. Dodging questions about work, romance, or money from your family? Fear not! Read on for the perfect list of multiplayer video games to keep your relatives occupied — games that even Grandma could play without getting (too) lost. Most of the games on this list are for four players, and span the current and next generations of consoles.

Super Mario 3D World (Nintendo; Wii U; four players) Mario in a cat suit. Once again: Mario in a cat suit. Yes, the graphics are amazing; yes, the music is orchestrated and will have you dancing in your chair. But what you really need to know is that four players means four Mario characters running around with swinging tails and cat ears. It’s adorable and fun to see Mario, Luigi, Princess Peach, and Toad all racing together to beat a classic Mario level.

If you’ve been bored by Mario lately, nobody would blame you. But trust that Super Mario 3D World is vastly more imaginative than the droll New Super Mario Brothers U, which has been rightly accused of phoning it in. You’ll ride giant swimming dinosaurs, play levels entirely in silhouette, and turn yourself into a Goomba all in the name of beating Bowser, again. The variety of levels and power ups in the game makes it look like the turducken of the Mushroom Kingdom, stuffing 10 Mario games into one. A tip for longtime fans: the Tanooki suit and Kuribo’s shoe are both back from Mario 3. Let’s-a-go!

Just Dance 2014 (Ubisoft; Xbox 360, PS3, Wii, Xbox One, Wii U, PS4; four to six players) The problem with video games for most non-gamers is the controller. They’re wacky, unwieldy things, infinitely more complex than the humble TV remote. Luckily Just Dance is a game that does away with all of that. Playing it on the Xbox or PS4 uses the systems’ camera functions to capture and rate all your awful, awkward dance moves in all their glory.

The song list includes a variety of jams to satisfy all family members (Christina Aguilera, Lady Gaga, and even “Prince Ali” from Aladdin — street rat!) While the professional dancer on screen performs slick moves, the players mirror them with their drunken best. Up to six people can dance simultaneously, fulfilling all of your Jackson 5 and Partridge Family dreams.

Word to the wise, the Wii version measures your dancing solely with motion sensors in its controllers. If you have the choice, go with the Xbox version, which uses the advanced sensors of the Kinect camera.

Wii U Bowling (Nintendo; Wii U; four players) Ah, bowling — the great equalizer. A game you can play with beer in hand. Feel the fear though, because this is a game your parents can (and will) beat you at. A vast improvement over its predecessor from the original Wii, bowling on Nintendo’s next generation console, the Wii U, uses advanced sensors to capture the more finely tuned spins and curves of your throw. This means it’s even more like real bowling, which you know, can be good or bad, depending on if you’re any good at the sport itself.

The best part about this game is its price: $10 (a day pass is just $2). You can buy it from Nintendo’s e-shop online, making this a purchase you don’t even have stand up to make.

The Cave (Double Fine Productions; Xbox 360, Wii U, PS3, PC, Mac, iOS; three players) A hillbilly, a knight, a Buddhist monk, a pilot, a scientist, a time traveler, and a pair of creepy horror-movie twins all stand waiting for a choice. The three characters you select will spend the next few hours trapped in the cave, a place where they’ll face their inner demons made manifest. If Mario games were slower, more intellectual affairs, you’d have The Cave. Up to three people can play at once, all trying to outsmart the omniscient narrator as he lays out traps and riddles that tease out the desires the characters are hiding even from themselves. The writing is sharp and constantly chuckle worthy, and it’s no wonder — its creator worked on the classic Monkey Island games. You Don’t Know Jack (Various publishers; Xbox 360, PS3, Wii, Android, iOS, Facebook; four players) “No, be smarter! Be smarter!” Games that yell at you are rare, and this one is rarer for being funny about it. Originally a PC game from the 1990s, You Don’t Know Jack is a trivia game in the guise of a TV game show. Four players can share one controller, using different buttons to buzz in their answers. Fun little tweaks like the ability to “screw” someone into answering the question make Jack crazily competitive. Amid the many available versions, the Xbox 360 and PS3 are the standouts — but if you don’t own a major console, you can fire this game up on your laptop or mobile phone for a spontaneous brain workout. *