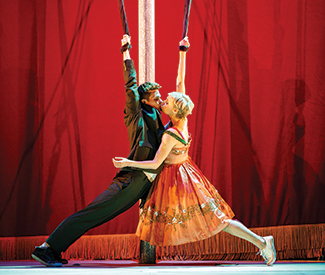 THEATER Crowd-pleasing can sometimes sound like a put-down — hey, sometimes it is — but it becomes a virtue in Kneehigh’s Tristan & Yseult. The Cornwall-based company (already known locally for Brief Encounter at ACT in 2009 and The Wild Bride at Berkeley Rep last winter) has returned to Berkeley Rep with a remounting of its 2003 hit. And it proves as accomplished and intelligent as it is shamelessly entertaining.

Adapted and directed by Kneehigh’s joint artistic director Emma Rice from the triangular love story of Tristan, Yseult, and Mark (a medieval courtly love tale that may well have been the inspiration for the fraught triangle of Lancelot, Guinevere, and Arthur as well as numerous works of art on down, including one of Wagner’s operas), this rousing and continually resourceful production (written by Carl Grose and Anna Maria Murphy) uses the multiple versions of the legend as an excuse for a music-fueled formal mélange of influences and references that plumb the wider seas of love in all its forms.

The basic storyline is as follows: Cornwall’s wise King Mark (Kneehigh’s founder and joint artistic director Mike Shepherd) defeats an invasion by Irish interloper Morholt (Craig Johnson) with the help of a mysterious French-speaking knight, Tristan (a dashing Andrew Durand). Charmed by the young man, Mark sends Tristan to find Morholt’s sister, Yseult (a smoldering, violin-wielding Patrycja Kujawska), so that the king might marry her and make amends with Ireland. But Tristan has sustained critical wounds in the battle that leave him fading away on a faraway shore, until he is nursed back to health by a smitten healer — the aforementioned Yseult, naturally. Their mutual attraction turns to discord when Yseult learns she’s just fallen for the man who murdered her beloved brother. But a little love potion, and equal parts sweet wine, solve that issue soon enough.

No longer a virgin, however, Yseult must substitute on the royal wedding night her hymen-ready servant Brangian (Craig Johnson again, hilarious and surprisingly sympathetic in drab drag and sparkling comic timing). The ruse works, and Mark remains happily ignorant of Tristan and Yseult’s liaison until the king’s obsequious servant, Frocin (Giles King), offers proof of the lovers’ deceit and Mark has them (and the nosey, needy Frocin) banished. Too in love with both of them to have them killed yet still too hurt to forgive them, Mark leaves his dagger near where he finds the lovers sleeping in the forest. They awake soon after and reflect on the hurt they’ve caused. They decide to part ways, Tristan taking to the sea and Yseult returning to Mark, whom she has grown to love (if in a mellower way). But the lovers promise to be there for each other when needed.

Years later, as Tristan lies dying from his old wound beside his unloved wife — significantly, also named Yseult but known to the chorus as Whitehands, our mysterious narrator (Carly Bawden) — he asks if the ship sailing into port has a white or black sail (the former means Yseult is aboard, the latter that she is not coming). Consumed with hurt and jealousy, the second Yseult answers negatively, with tragic consequences all around.

That may sound like too much information, but the joy of the production rests in the telling (and the deft performances doing the telling) more than in the tale itself. This is best left a surprise. Suffice to say that the production, set on Berkeley Rep’s large Roda stage with full use of the aisles and other parts of the house, takes supreme advantage of an open aesthetic in which the presence of the audience and the mechanics of the staging are both readily acknowledged and built upon.

Indeed, Rice’s direction is so skillful and subtle that objects, characters, and actions can seem to pop out of nowhere despite an aesthetic that largely does away with hidden stagecraft, preferring to revel in what it reveals — as when, for example, the two lovers down their love potion and sweet wine and drink themselves silly, literally feet-off-the-floor high, dangling from aerial bands hoisted by members of the chorus of the unloved. (The latter is a comical Python-esque troupe of “lovespotters” dressed as proverbial birdwatchers or trainspotters in matching rain ponchos and wool headgear). Meanwhile, a live band (under musical director Ian Ross) casts a deliciously forlorn nightclub atmosphere throughout, including pre-curtain and entr’acte.

That sad-sack chorus, and various supporting characters who get their due here, also flags the thematic breadth of the play: Tristan & Yseult is about love in all its elusiveness and inconstant variety; love that alternately supports and belies the romantic ideal represented by the title characters. At the same time, the serious charm offensive underway points to another, complimentary end: the successful wooing of an audience through the sheer bliss of theatrical virtuosity. *