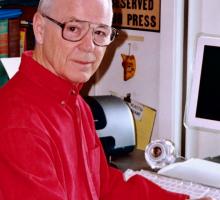 Guardian columnist Dick Meister, former labor editor of the San Francisco
Chronicle and KQED-TV Newsroom, has covered labor and politics for more than
a half-century. Contact him through his website, www.dickmeister.com, which includes several hundred of his
columns.
It’s time for Congress to help the many jobless Americans ­an estimated
450,000 in the next three months alone ­ who are about to be denied
federally- funded Unemployment Insurance benefits.

What Congress must do ­ and must do quickly ­ is once again expand the
emergency program that was established during the Great Recession in 2008 to
provide benefits averaging $300 a week to the steadily growing number of
jobless.  Congress has until only January 1 to block the first cutbacks of
extra benefit weeks that could continue until at least 2015 unless Congress
Acts.

President Obama and congressional Democrats are pushing measures that would
lengthen the benefit payout period through 2014 at a cost of about $25
billion on top of the $225 billion spent so far on the program. But given
the congressional haggling over economic measures, the chance of agreement
before Congress adjourns December 31 is slight.

Meanwhile , the number of Americans unable to find  jobs they need for
survival remains in the millions. Already, there are four million who have
been seeking jobs for more than six months and many others who have stopped
looking.

Particularly hard hit are aging as well as younger workers, and women and
minorities. Their number ­ and need for unemployment benefits ­ is certain
to grow, most likely at a rapid pace.

All this is happening, of course, at the same time that banks, corporate
interests and other wealthy Republican friends continue raking in huge
profits. Money gained from relaxing the tax breaks given such political
friends, for instance, could very well go into funding further Unemployment
Insurance payments and other steps to help U.S. workers.

Ironically, cutting the federal benefit program could actually lead to more
unemployment. That’s because workers denied benefits naturally have less to
spend and that could in turn cause those who rely on the laid-off workers’
business to cut back operations.

The need for extending the federal benefit program should be obvious to
anyone outside the powerful circle of GOP & friends. Listen to what Gene
Sperling, Obama’s chief economic adviser, told the New York Times’ Annie
Lowrey:

“There has not been a time where the unemployment rate has been this high
where you have not extended it. Why would you not expand now, when you’re
dealing with the nearly unprecedented levels of long-tern unemployment
coming off such a historic recession? “

Guardian columnist Dick Meister, former labor editor of the San Francisco
Chronicle and KQED-TV Newsroom, has covered labor and politics for more than
a half-century. Contact him through his website, www.dickmeister.com, which includes several hundred of his
columns.