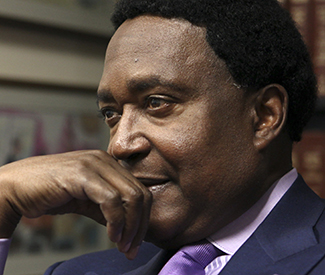 Prominent civil rights lawyer John Burris will sue the SFPD on behalf of the family of D’Paris “DJ” Williams, after a neighborhood brawl involving police at the Valencia Gardens housing project that Burris called “outrageous.”

Last Friday, 20 year old D’Paris Williams was bicycling to his cousins’ house from the Batkid festivities downtown when plainclothes police officers from the Violence Reduction Team, a narcotics and firearms reduction squad, attempted to detain him for riding his bike on the sidewalk. In the confusion, a brawl broke out with the police, Williams, and three neighbors. Video was recorded of the incident, which quickly went viral.

After seeing a bloody and beaten Williams carried to a squad car by police in the video clip, his family and the residents of Valencia Gardens have posed the question: why?

Why did plainclothes officers tasked with the mission of seizing guns stop a young man coasting on his bike on a sidewalk for a few feet? The family said they believe Williams was targeted because he was a young man of color visiting a housing project.

“When young people are brutally assaulted by the police, there must be accountability,” Burris told the Guardian.

Williams’ step-father, Frank Williams, an ex-offender who now works with the Center on Juvenile and Criminal Justice, was shaken when he first heard what happened to his son, DJ. “I know there are some good cops, some are my friends,” he said.  “But there are some bad cops. What ran through my mind was how he got profiled like that, just because. I don’t like how it happened, and how they justified it.”

The SFPD was unavailable for comment at press time. All they found on DJ Williams was juice and a cupcake.

A protest defending D’Paris Williams and the three other men hurt and detained in the brawl marched in the Mission Tuesday, and another protest is planned for tonight at 5pm at 15th and Guerrero.

Click here for our previous coverage of the Valencia Gardens incident.