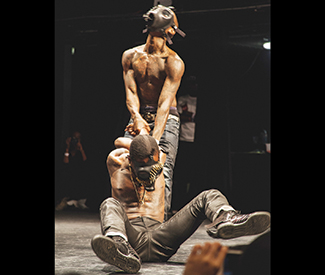 DANCE For an event with a reputation for wall-shaking energy, the first program of the 15th Annual San Francisco International Hip Hop DanceFest turned out to be an oddly muted experience. The mix of acts — which in the past has always opened new perspectives on an art that has moved from the street onto the stage (and even reality TV) — simply wasn’t potent enough. Also, with only one company from abroad, the evening just barely warranted its claim of being “international.”

But even though the program disappointed as a totality, it did include individual acts of quality. In an aesthetic that so often emphasizes virtuosic use of the torso and the legs, Struggle for Pleasure — from a sextet of dancers of the London-based Far From the Norm Company — captivated because of its gentle and controlled employment of the arms. They snaked, embraced, and coiled into tendrils, perhaps embodying the human spirit, maybe with a sense of longing. Performed to violins, the choreography, much of it presented as a group endeavor, dipped the dancers into a hypnotic state in which they froze or tried to break open. One of them readied himself for a sprint that never happened. Another exploded into a whirlwind. Struggle felt subdued, dreamlike, and yet true.

In their first appearance at this festival, New York’s Bones the Machine and DJ Aaron sent gasps through the audience with the decidedly uncommon Bonebreakkings. It was a truly astounding contortionist act in which they pretzled their arms into joint-crunching positions — accompanied by appropriate sound effects. Even though the act has been widely circulated thanks to America’s Got Talent, to see these two dancers live was a pleasure, though a somewhat chilly one.

Another excellent first-timer was the Embodiment Project, one of the Bay Area’s most fascinating hip-hop troupes, in part because of the way it collaborates with MoonCandy LiveHouse’s fine musicians who, once again, performed on stage. In the sinister Dare To Love, choreographer Nicole Klaymoon and Michelle “Mystique” Lukmani slithered in and out of d. Sabella Grimes’ slippery embrace, paying what looked like a heavy price. Grimes, a former member of Rennie Harris Puremovement, and an extraordinarily sinewy and seductive popper, finally snared himself vocalist Shamont Hussey. This was hot theater, over so fast you hardly knew what hit you.

Also fun to watch was the return of four members from FootworKINGz. These speed demons developed a virtuosic style of footwork, based on one that originated in Chicago as a response to house and juke music. In addition to delivering razor-sharp attacks at dizzying tempos, the quartet performed with wit and charm.

It is understandable that the fest wants to honor the Bay Area’s diverse hip-hop community, which offers training in dozens of local studios and schools. These are also places where many youngsters find a welcoming environment to develop skills and in which to express themselves, so there has always been place for them at the annual Hip Hop Fest. But this year’s selection short-changed the audience. Whatever the curating process, it needs to be improved. Openers Funk Beyond Control is one of the largest and most well-established Bay Area schools, but the group did not look as good as they had at previous festivals. The choreography looked tired and lacked care.

The premise for After Hours was intriguing enough. It took a popular dance trope — the doll that acquires life — and translated it into mannequins that take over a department store once it closes its doors. After opened with a sextet of women fighting over some hats on sale before being kicked out. Then the black-clad ensemble descended from its pedestal for elastic group dancing, some modestly intriguing solos, including the compulsory tot — here cast as the janitor. But the whole thing felt dutiful and uninspired. Also, not waiting for the traditional community bow at the end of the evening was disrespectful to fellow artists and the festival’s producer, Micaya.

Another first appearance, by the Great House of Dance, showcased a huge company from Sacramento. It was big but not great. Its group sequences seemed strung together willy-nilly, and went on for much too long. There was nothing that held this presentation together besides the good will by the performers — some who had real talent.

Illstyle & Peace Productions Ain’t No Party Like a Illstyle Party, sent individual performers into competent, sometimes athletically-impressive solos, but this was a thrown-together, clumsy, applause-milking endeavor, unworthy of a group that has done much better work. Why?