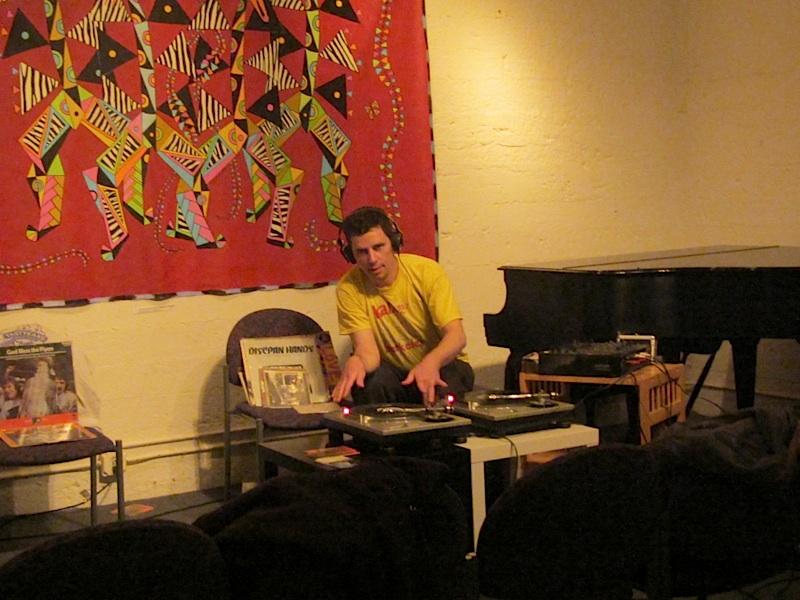 When a friend of a friend held his 33 1/3rd birthday party, he filled the rooms of his apartment with turntables and stacks of LPs for his guests to play themselves. It was basically the best party ever, and a good argument for propagating the tradition of celebrating that particular milestone. And of course what better milestone to celebrate if you’re in the music business, like long-time independent label Alternative Tentacles? Particularly in a business climate unkind to independent anything, to be able to celebrate three-plus decades of sticking it to the establishment at all is some cause for jubilee.

Of course there are pitfalls to growing older, which I only discovered when I got to the Alternative Tentacles blowout anniversary show at Slims at the perfectly respectable club-going hour of 11pm, to discover that I had missed most of the show. Well, I never! Not only had a missed out the rare opportunity to see one of my personal musical heroes, Mojo Nixon, tear it up in his indomitable, breakneck way, but I didn’t really get a chance to soak in the atmosphere building up to the main event: headliners Jello Biafra and the Guantanamo School of Medicine.

Fortunately even if my flow was off, the band’s was not, and the fast and furious set punctuated by politicized bon-mots and observations was classic JB. Jello Biafra, of course, is the founder and overlord of Alternative Tentacles, former frontman of the Dead Kennedys, spoken-word raconteur extraordinaire, and occasional political candidate, and while he was sporting the unlikely trimmed beard and mustache combo of “The Most Interesting Man in the World,” his voice was still the strident, yodel of days of yore, and his stage persona full of ham.

Humor and politics have always been the hallmarks of Jello’s work, which songs like “Burgers of Wrath,” “Pets Eat Their Master,” and “Kill the Poor,” perfectly encapsulate, and except for an awkward stagedive that didn’t quite go anywhere, Biafra’s stage performance was as energetic as ever, thankfully proving that aging doesn’t have to be about being graceful, and a punk show that ends at midnight can still rock.

Meanwhile on the other side of the city, an unexpected Alternative Tentacles connection represented at the Emerald Tablet, where Philadelphian Joseph Gervasi held a screening of his Philly punk-scene archive project, Loud! Fast! Philly!, and his co-host/co-organizer turned out to be Jesse “Luscious” Townley, formerly of the Philly scene, and general manager of Alternative Tentacles, who DJ’d an eclectic set before the show.

Originally compiled in the earlier part of the year, Loud! Fast! Philly! was originally shown at the Cinedelphia Film Festival as an “interactive” audio-visual presentation combining old home movie-style footage of various Philly punk bands with live commentary from members in attendance. But in compiling the project, Gervasi realized it was the stories behind the videos he really wanted people to have access to. Thus began the second arm of the project: an audio archive of interviews with a variety of old school Philly punks, which lives in perpetuity online.

Truthfully the archive is probably the most fascinating part of the project. The video clips, while offering a fascinating peek at a particular time and place (and substandard quality of recording devices), don’t offer nearly the same breadth and depth of history as do the interviews. That said, rare footage of bands like More Fiends, Flag of Democracy, Dead Milkmen, and R.A.M.B.O. were unique and frankly humorous enough to transcend their shaky amateur quality and insider appeal, and provided a weirdly cohesive portrait of an ever-morphing scene, from the 80s to the present.