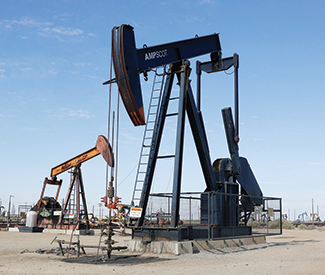 Environmentalists who oppose fracking in California are concerned about more than possible groundwater contamination or other hazards that could directly result from the fossil fuel drilling practice. They also want to save the planet.

The Monterey Shale, a massive underground geological formation spanning a large swath of California, contains approximately 15 billion barrels of hard-to-get oil that could technically be extracted in massive fracking operations, Kassie Siegel of the Center for Biological Diversity said during a Nov. 15 call with reporters.

All told, burning that quantity would eventually release six billion metric tons of carbon dioxide into the air. “That is a carbon bomb,” Siegel stated bluntly. Combined with methane that is released from the wells during the drilling operations, “a fracking boom in California could undo all the progress our state has made on greenhouse reductions,” she warned.

But for now, the debate on fracking in California is focused on newly drafted state regulations that would place controls on the practice for the first time. The proposed rules pertain to permitting and disclosure in the areas surrounding individual wells — yet they don’t contemplate the cumulative impact of fossil fuel combustion over time.

Fracking, formally known as hydraulic fracturing, is a technique used for extracting oil or natural gas. It involves injecting high-pressure fluids underground, often containing toxic chemicals, to break up bedrock in order to access the fossil fuel sources trapped within. The California Division of Oil, Gas, and Geothermal Resources (DOGGR) released a set of draft regulations Nov. 15 proposing new rules around what’s known as “well stimulation,” industry-speak for a type of drilling that includes fracking.

The new rules are slated to go into effect on Jan. 1, 2015. They’ll continue to be hashed out throughout next year, and DOGGR will accept public comment on the initial proposal until Jan. 14, 2014.

The regulations came about in response to Senate Bill 4, legislation enacted Sept. 30 after a statewide coalition of environmentalists launched a campaign to put a stop to fracking, which is already happening in some parts of California. Many groups within that coalition viewed the legislation as flawed, because it didn’t prohibit the practice outright.

“The only safe way forward for California is a halt to fracking in our state,” Siegel said.

Still, the draft regulations do seek to place new requirements on the oil and gas industry in an effort to protect public health where fracking occurs. According to DOGGR records, fracking is most common in Kern County.

“There are some good provisions in the regulations,” Bill Allayaud of the Environmental Working Group said in the briefing. “For the first time, all forms of well stimulation will require a permit from DOGGR. That’s a good thing.”

The rules will also require companies to conduct an analysis of groundwater and other wells nearby before proceeding with fracking operations, unlike before. The new regulations also establish a notification process to make nearby residents aware of new drilling operations.

Meanwhile, SB 4 calls for an environmental impact report and a study on the overall health and safety effects of fracking — but it’s unlikely that this study would result in a prohibition on the drilling practice, as environmentalists had initially called for.

“The Natural Resources Agency is currently developing the scope of the study and will begin the analysis in December 2013,” according to a fact sheet published by DOGGR.

“We don’t think we’ll be getting deep answers as to whether fracking and acidization and all forms of well stimulation are safe or not, for both protecting public health and the environment,” Allayaud said.

Meanwhile, he expressed concern that the public comment period for the initial set of proposed rules did not provide enough time for concerned Californians to respond, because people are being asked to weigh in over the course of the holiday season. The Environmental Working Group has requested an extension of that deadline, but it seems unlikely that DOGGR will grant one.

“The comment period was extended from the mandatory 45 days to 60 days for that reason,” California Department of Conservation Chief Deputy Director Jason Marshall said when asked whether the deadline extension would be granted in light of the holidays. “Additionally, we are anticipating an additional 45-day public comment period after the initial draft regulations are adjusted based on that initial public comment.”

Environmentalists also voiced the concern that while DOGGR plans to hold a series of public hearings on the proposed fracking regulations, none will be held in the Bay Area, despite its concentration of advocates who helped get the statewide opposition campaign off the ground.

“The law requires one public meeting, if requested. We are doing five, primarily in areas of the state where oil production is most common,” Marshall responded when asked why there weren’t any Bay Area meetings scheduled.

Asked whether any of the pending studies would take into account the six billion metric tons of CO2 that could potentially be released if the Monterey Shale were to be developed, Marshall seemed to suggest that the state was willing to go along with a regulated form of fracking even as it continues pursuing initiatives to curb greenhouse gas emissions.

“We still derive over 90 percent of our transportation fuels from hydrocarbons,” he wrote in an email. “With SB 4 and these regulations, California is acting now to ensure that extraction of those hydrocarbons happens in the safest way possible, even as we work to reduce our energy dependence on those hydrocarbons.”