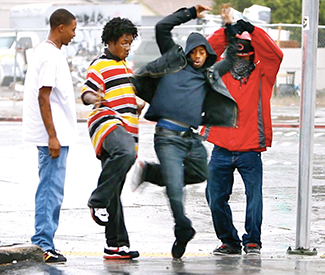 FILM In movies, maybe more than in life, trouble awaits outsiders who poke into cults that don’t take kindly to outsiders. Sound of My Voice (2011) is a recent example, but The Wicker Man (1973) remains probably the gold standard of “Pardon me, but I’ll be infiltrating your society, passing judgment, and suffering the inevitable consequences” cinema. For every recruitment-happy group (step right up, young ladies, and throw your lot in with 2011’s Martha Marcy May Marlene), there are plenty more that would just as soon be left alone.

A new entry into this genre, Holy Ghost People, comes courtesy of Mitchell Altieri, half of the directing duo known as the Butcher Brothers (the other “brother,” Phil Flores, co-wrote and co-produced). You may remember the BBs from their 2006 breakout, The Hamiltons — about a family with a bloody secret. It’d make a perfectly nightmarish double-feature with another recent indie horror, Jim Mickle’s We Are What We Are. Holy Ghost People, which borrows its title and some archival footage from the 1967 documentary about Pentecostal churchgoers in West Virginia (now in the public domain, it’s viewable on YouTube), aims more for dread than gore, and represents an artistic step forward for the San Francisco-bred pair.

If certain choices don’t entirely work (a bookending voice-over feels unnecessary, given the film’s vivid visuals; the score can feel intrusive at times), Holy Ghost People is bolstered by some blistering performances, chiefly from co-writer Joe Egender as Brother Billy, the boyish leader of a church compound tucked into the Southern wilderness. (The film was shot at a summer camp — a setting not used so creepily since the first few Friday the 13th flicks.) Stumbling not-so-innocently into Billy’s lair are unlikely friends Wayne (Brendan McCarthy) and Charlotte (Emma Greenwell), who pretend to be spiritual wanderers when really they’re searching for Charlotte’s long-lost sister, last seen spiraling into junkie oblivion.

Anyone — but particularly Billy, whose tidy pompadour and welcoming words can’t hide the fact that he’s as sinister as the serpents he handles during sermons — can see that Wayne, a haunted alcoholic, and Charlotte, who’s battling her own demons, aren’t who they claim to be. Still, they’re cautiously accepted by lower-ranking members, including Sister Sheila (Cameron Richardson), a soft-spoken blonde whose beauty is marred by prominent facial scars.

As events get freakier in God’s country (or is it?), Holy Ghost People doesn’t quite offer a grand payoff to all that suspense — though it does establish a new clause to that old cinematic rule about guns: If you see a poisonous snake in the first act, damn certain it’ll bite someone by the end.

Holy Ghost People kicks off the San Francisco Film Society’s fifth annual Cinema By the Bay Festival, which showcases movies made “in or about the Bay Area,” as well as works made by artists with Bay Area connections. This agreeably loose thematic structure allows the Tennessee-shot Holy Ghost People to share marquee space with SF-centric doc American Vagabond, by Finnish director Susanna Helke.

American Vagabond, about homeless LGBT youth, is particularly timely in light of the SF Board of Supervisors’ recent vote to close parks overnight. Golden Gate Park is home for James and Tyler, a young couple who’ve fled their close-minded families, dreaming of a better life in the rainbow capital of California. Guided by James’ poetic, confessional narration — as well as other voices that chime in to share their experiences — American Vagabond is a specific, deeply personal story that also offers a broader comment on how gay youths and the homeless are treated, even in a city as progressive as SF. And it does take some unexpected turns, as when James reunites with the family that rejected him — though the reasons for the reconciliation are not happy ones.

Elsewhere in the fest, take note of Berry Minott’s The Illness and the Odyssey, a medical whodunit of sorts that explores the history and controversy surrounding Lytico-Bodig, a neurological disease found almost exclusively in Guam. For years, scientists have believed that finding its cause would be like “a Rosetta stone,” according to Dr. Oliver Sacks, resulting in cures for Alzheimer’s, Parkinson’s, and related illnesses. But since nobody can settle on a hypothesis — is it infectious? Caused by plants? The result of a curse? — and nobody really wants to share research (what, and let that Nobel Prize slip away?), there’s been little progress other than clashing speculation, to the great annoyance of those in Guam whose families are affected by the disease. Ultimately, The Illness and the Odyssey is more about the scientific process than anything else, with plenty of prickly personalities (in both current and vintage footage) stepping up to share their views.

Also worth a mention: In Hak Jang’s The Other Side of the Mountain, a Korean War-era romance (with musical numbers) that happens to be the first-ever North Korea/US cinematic co-production. And don’t miss “Street Smarts: YAK Films’ Dance Then and Now,” an Oakland-born phenomenon that has spawned a international array of films showcasing so-called urban dance — staged on subway cars, in intersections, and other unexpected places — of the most limber, slinky, sassy, acrobatic, and awe-inspiring varieties. *

CINEMA BY THE BAY FESTIVAL