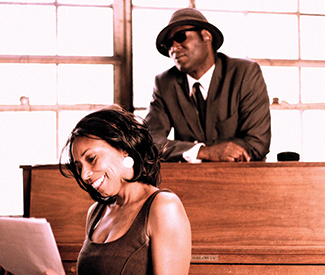 THEATER Forgetting can be a key to understanding, and to freedom. This is something any jazz musician knows. Learning theory, practicing scales, getting to know your instrument and your craft — it’s all prelude to forgetting, to letting go. What comes back to you in the moment, ideally, is deeper than any superficial knowledge. It’s everything behind the music — a life.

A memory play can function similarly, at least it seems to for Margo Hall. The well-known Bay Area actor and director found herself improvising over her own carefully crafted words in the creation of Be Bop Baby — a musical memoir of her remarkable Detroit upbringing under the guiding influence of her musician stepfather Teddy Harris Jr., that Hall says really marks her debut as a playwright (Hall was also one of several actor/co-writers for the 2005 verbatim treatment of the Jonestown tragedy, The People’s Temple).

A world premiere capping Z Space’s 20th anniversary season, Be Bop Baby is set in the busy basement of Hall’s childhood home, which doubled as a rehearsal space for her stepfather — a musical director, composer, arranger, and performer known and respected in both jazz and Motown circles (the latter as, most famously, musical director of the Supremes). There, as well as throughout Detroit’s exceptional musical scene, Hall and her two sisters grew up amid a panoply of musicians, artists, celebrities, and eccentrics.

The basement thus becomes the site of an excavation, filled with colorful characters and anecdotes and brimming with music. Indeed, helping to bring it all to life onstage is a 15-piece jazz orchestra under Marcus Shelby. The acclaimed Bay Area musician-composer — along with dramaturg Nakissa Etemad — collaborated closely on this return to 1960s-70s Detroit, developing arrangements around Hall’s own lyrics and the melody lines she imagined for them.

“Marcus reminds me a lot of my dad,” says Hall, speaking just before a rehearsal last week. “He has a big band; he knows what that means. He understands the discipline of the musicians. Marcus is a guy of tradition. He likes real instruments — I mean all of these things that my stepfather would promote. And he’s just a cool cat, just like my dad, just into the music fulltime; a real, honest, true musician. Growing up with that kind of person really taught me about authenticity and not faking it. I hate to say, ‘You don’t find those people anymore,’ but they sometimes can be a rare breed.”

But even memory, to remain true, can’t always stay fixed. Since the death of her mother in 2000, and Teddy several years later, Hall’s childhood home and its once-vibrant basement have come under a new tenant: Hall’s own, formerly estranged, biological father.

“It’s this crazy thing that happened that I never expected. My real father and my mom divorced 45 years ago. [My biological father is] a free spirit; he’s a totally different character than Teddy. And I found out he moved into Mom and Teddy’s house. Mom and Teddy, that was their house, that was their basement, my mom’s estate, you know, our little two-unit duplex.”

That development found its way into the emotional landscape of the play itself, giving it a more complex dramatic makeup, but also leaving Hall at a loss as to how to channel it all. Staging this kind of dynamic seemed to defy the manicured sentences she had set down on paper. Hall found herself unable to even recall them — something unusual for the experienced actor in her — as if Hall the playwright were someone she had yet to figure out.

“I had written all this text, and I couldn’t remember it. It was very strange. So I said, ‘Can I just improv a little it on top of this text so that it really feels authentic?’ I became the actor, and I felt, ‘I don’t like what that playwright wrote!'” she laughs. “Was I censoring myself? Was I trying to be perfect in the writing? I had to figure out how to take that text and make it my own — even though I wrote it. Now, the more we do it, I do say a lot from the text. But it’s a freedom that I have now, where I can be more authentic in the moment.”

As for her ongoing relationship with her biological father, Hall credits Be Bop Baby with strengthening her resolve to pursue an understanding there.

“It’s definitely made me realize that I do need to pursue my relationship with my real father more than I have,” concludes Hall. “And he’s a wonderful, fascinating man. I could write a whole play about him too,” she says with conviction, before an afterthought makes its way quietly to the surface. “Maybe I will?” *

BE BOP BABY: A MUSICAL MEMOIR